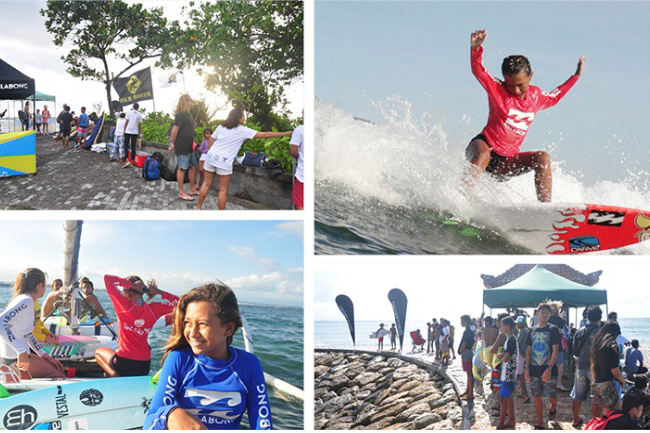 Due to tough, windy conditions, Sanur Reef was chosen on the eleventh hour to take the setting for the first leg of the Billabong Grommet Attack 2015 series.

But as surfers, we are all well aware that Mother Nature can change her mind without notice, and unfortunately, the predicated strong south swell failed to show up. "Ok, so there is wind on this side of the island this time of year" said proud father Rizal Tandjung, "these kids are going to have to learn how to compete in challenging conditions sometime".

And indeed they did, with verve and determination, having to be boated out to the distant line-up and then left to paddle in. "That is the physical education element of this contest" laughed parent Cacho Izquierdo, "It'll put a little meat on their bones".

The most popular event of the day was the Push-In competition. Despite the mighty-might size of the competitors in this division, our young ones surfed with the earnestness of heavy weight boxers., with Westren Hirst taking first place with style far beyond his years. Moving to arguably the toughest conditions of the day, the girls in the division went at it like Spartans and on to a very surprising result. In the end, the winning title was separated by only .04 of a point; and it was a blond Summa Longbottom who triumphed over Taina for the narrow win.

The Under 14 Boys division was clearly the hardest fought final. Despite Ben Benson's flashy off the lips, it was Waida's steady wave selection that wore the young star down for the win. Waida, with canny and able surfing, surfed a mature final to defeat Benson by over 9 points. While over at the Under 16 Boys, the results were fairly predictable with Raju Sena dominating the final with his lengthy height and power. Sumbawa's Andre Anwar, who badly needed this win to impress his sponsors, attempted a spirited assault, but the waves just didn't come his way "That's ok" Said Anwar, "I'll get him next time".

Watch this space, as we prepare for the second and third leg of the Billabong Grommet Attack Series at Padma and Halfway Beach respectively

Billabong extends its sincerest gratitude to the ASC/ISC, the Sanur Surfing club, Padma Boys and the Halfway Boardriders Club, Warung Made and You C1000, for making the first leg of the series a success.