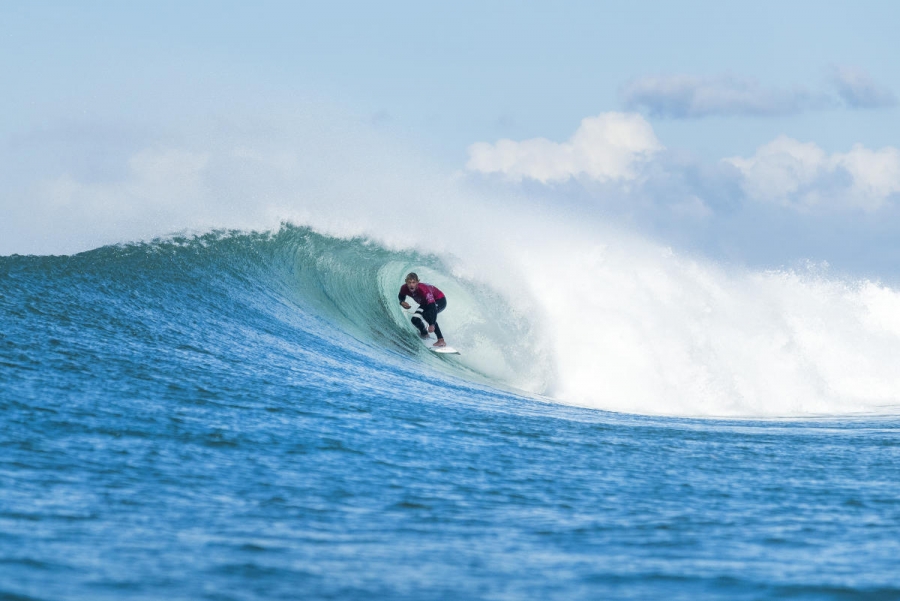 Reigning World Champion John John Florence of Hawaii advancing directly to Round Three of the Corona Open J-Bay after winning Heat 6 of Round One at Supertubes, Jeffreys Bay, South Africa. WSL / Kelly Cestari

The Corona Open J-Bay, sixth stop of The World Tour 2017, started this last saturday with épic conditions to complete the opening round of competition.

Six-to-eight foot offshore rights peeled down the Supertubes section all day and allowed the world's best surfers to really showcase their talent.

Better would have been almost impossible, Jeffreys Bay received the best surfers in the world with the best this wave can offer. And the surfers just gave one of the best surf competition shows ever at that African Wave.

John John Florence made the best performance of the day by Taking in his three best waves three scores over 9 points. Actually if we look to the graphics below we can check that more than 09 score winners were over 16 points. Situation only possible when we have the best surfers in the world riding one of the best point breaks in the world.

"The waves are firing right now, this is the best J-Bay I've surfed during the contest," he said. "Being out there by yourself you can position yourself exactly where you want to be, taking off and then you have this big open canvas in front of you, it's crazy. My board is called the ghost, I rode a 6'2 at Margaret River, and a 6'0 here and since we've started working on this board I haven't found a wave where it doesn't work. It just gives you so much confidence throughout the practice surfs, you're not trading of boards, you already have that confidence on a good board."

This sunday , despite the early decision on running the second round of the event, and after noticing the decreasing of the swell, the event organizers were forced to rethink the decision and delaied the event.

The check in for a possible restart will be around 6:00 am local time