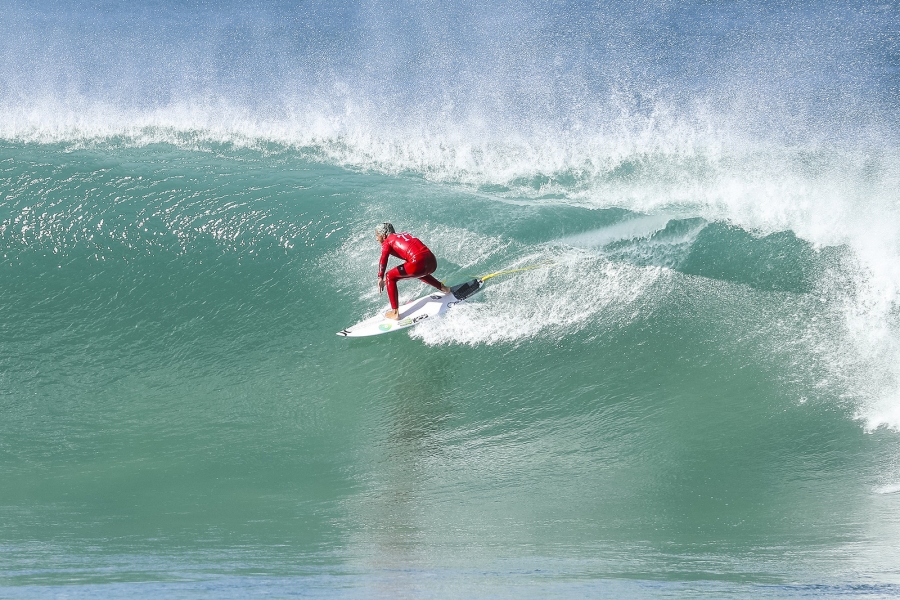 Filipe Toledo made the best heat total of the day. Click by Kelly Cestari/WSL

Action continued today at the Corona Open J-Bay, stop No. 6 on the 2017 World Surf League (WSL) Championship Tour (CT). Competition ran through the remaining 10 heats of Round 2 in excellent conditions at Jeffreys Bay...

...and a series of thrilling match-ups saw surfers battle to avoid early elimination.

Filipe Toledo (BRA) was the day’s top performer and stormed his way to victory in Round 2 over Kanoa Igarashi (USA). An incredible 19.63 heat total (out of a possible 20) secured a Round 3 berth for the Brazilian. Toledo claimed the first perfect 10 of the competition with a long barrel ride followed by two big turns. With ten minutes remaining Igarashi found a long tube ride of his own for a 7.33 but couldn’t escape the combination and is eliminated in Equal 25th place.

“It feels good to be back, especially surfing perfect waves at J-Bay,” Toledo said. “You just have to enjoy it out there. Our heat was definitely amazing with pumping surf non-stop. My froth level is over the moon and I get super excited to get out there and have my heat and put on a good show.”

The 2017 rookie class shone today with five of seven surfers making it through to Round 3 and sending home some big names in the process.

Ezekiel Lau (HAW) challenged Wiggolly Dantas (BRA) in the penultimate heat of the day and took a narrow victory to earn his place in the next round. A pair of eight-point rides from each surfer made for an exciting match-up, but it was Lau who took the slight edge with his final ride and sent the Brazilian home early.

“I told myself that if I just finished up two waves I’d be happy but I ended up getting lots of opportunity,” Lau said. “I was just trying to be relaxed and enjoy it out there because it’s firing. It was a full battle until the end so I’m really happy with the way it turned out. I was bummed that I was in Round 2, but I just had to roll with the punches and keep fighting.”

Round 2 Heat 7 delivered a high-scoring match-up between current No. 10 on the Jeep Leaderboard Sebastian Zietz (HAW) and 2017 WSL rookie Leonardo Fioravanti (ITA). Zietz opened with an impressive 9.83 for a combination of barrels and powerful turns, but two eight-points rides from the Italian were enough to take the lead. The surfer from Hawaii continued to hunt for a back-up 6.80 but could only find a 5.93 and was eliminated from the competition in Equal 25th place while the rookie advanced on to Round 3.

“I am frothing right now,” said Fioravanti. “We’re in J-Bay and the waves are absolutely pumping. It’s a dream to be here and I think it’s the best waves I’ve ever surfed in my life in a heat. My goal was to try and get a big score at the start and then back it up. It was in a tough because Seabass (Sebastian Zietz) is an incredible surfer so I’m stoked to make that heat. Win or lose, we surfed pumping J-Bay so I’m just happy to be here.”

Joan Duru (FRA) laid down an excellent 9.00 on one of the biggest waves of day, despite falling on the final maneuver. The score will see the rookie move on to Round 3, while Adrian Buchan (AUS) is dispatched in 25th place.

“I’m so happy to be here because the waves are perfect,” Duru said. “It’s hard to wait for the good ones but you have to choose the right waves, surf them well and not fall. I love South Africa and I’ve had good results here in the past so hopefully that plays in my favor.”

Caio Ibelli (BRA) had an impressive start in Heat 9 and built a solid 16.43 heat total to take a convincing lead, and eventually win the heat, over opponent Stuart Kennedy (AUS) putting the Brazilian on the right track to improve on his 13th place finish at Jeffreys Bay last year.

“I think I went for the right waves and worked with my nerves,” said Ibelli. “I was not very positive this week because I haven’t surfed well and my ankle hurts. I’m stoked to make it through this round. It definitely gives me confidence getting this win so I’m taking the pressure off. I’m super stoked to be in J-Bay and it’s the best waves here I’ve ever surfed in my life.”

An exciting battle played out between Jadson Andre (BRA) and Kolohe Andino (USA) in Round 2 Heat 4. Andino held first place after the opening exchanges but the Brazilian was able to turn the heat with a 7.83 at the halfway mark. Andino, current No. 9 on the Jeep Leaderboard, quickly answered with multiple barrels and a series of big carving maneuvers for a 7.03, but the score was just short of what was required. A deep barrel from Andre earned him a 7.97, increased his lead and secured his third CT heat win of 2017 while Andino was sent home with his second 25th place finish of the season.

“Yesterday I went for a freesurf and pulled into a barrel and fell,” Andre said. “My fins went straight into my head and I had six stitches and broke my favorite board. I’m stoked to finally beat Kolohe (Andino) in a heat. This time I just focused on getting the right waves. I feel like I’ve been surfing well this year but just making the wrong decisions and at this stage there’s no room for mistakes. Let’s see what’s going to happen in Round 3.”

Julian Wilson (AUS) took on Josh Kerr (AUS) in Heat 5 of Round 2 and the pair got to work quickly. Wilson led from the start with a 7.67 on his second ride and backed it up with 6.60 and built a solid heat total. Kerr continued to hunt down the score, in need of a 7.35, but wasn’t able to compete with the World No. 8 and is eliminated from the event in equal 25th place.

“It’s so enjoyable out here and it’s only going to get better” said Wilson. “It’s a beautiful day to be out there with just one other guy. If it has a big long wall with some size on it and barrels on the inside - that’s what everyone wants. It was really nice to have some exchanges out there and get some nice waves.”

Current No. 3 on the Jeep Leaderboard Owen Wright (AUS) took on 2017 WSL Rookie Ethan Ewing (AUS) in the opening heat of the day. The more experienced competitor controlled the majority of the 35-minute heat, the first head-to-head match-up for the pair, with two mid-range scores. A 7.33 with six minutes remaining put the rookie back in contention but he wasn’t able to back it up and is sent home with his sixth 25th place finish of the season.

“It feels nice to get going and get that Round 2 out of the way,” said Wright. “It was a scrappy heat but it played out to my advantage. I felt like it was going to be a slow one so I knew I needed to get going. When you don’t get the best wave of the heat it’s tough to come back.”

11-time WSL Champion and four-time event winner Kelly Slater (USA) has broken two bones in his foot while freesurfing this morning at Boneyards and has officially withdraw from the competition. Event organizers will reconvene tomorrow morning at 7 a.m. local time to assess conditions and make the next call.