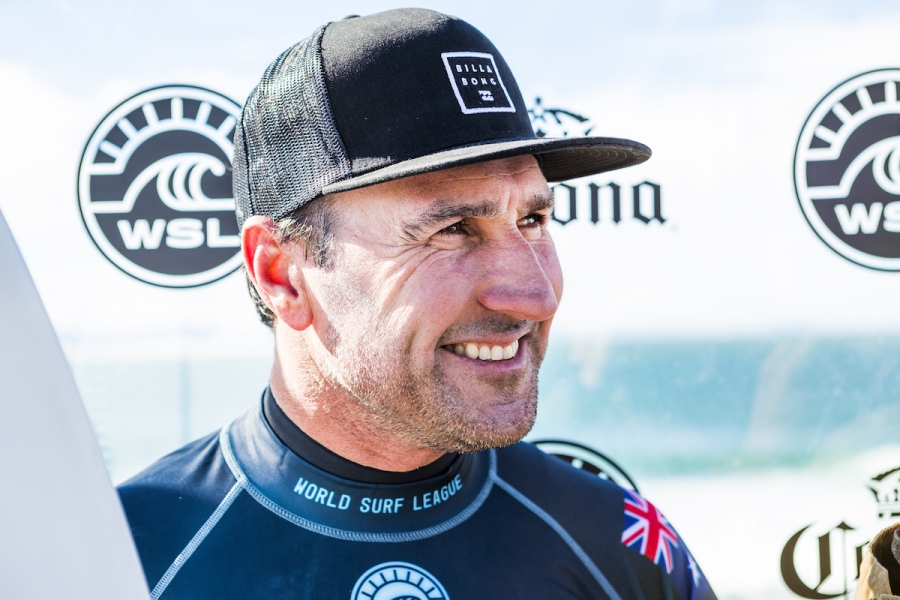 The Corona Open J-Bay, Stop No. 6 on the World Surf League (WSL) Championship Tour (CT), opened yesterday with the completion of men’s Round 1 and the first two heats of Round 2 in three-to-four foot (1 - 1.3 metre) conditions at Supertubes. The men made the most of the conditions with a full day of competition that  included big announcements, wins, and performances to kick off the event window.

Joel Parkinson (AUS), 2012 WSL Champion and two-time event winner, announced his retirement ahead of his opening Round 1 heat. The Australian will surf the remaining events of 2018 and officially hang up his competitive jersey after the Billabong Pipe Masters in December. Parkinson’s first career win was at this event as a wildcard in 1999. Now, at the site of his first major victory, the 37-year-old earned the Round 1 win against current World No. 1 Julian Wilson (AUS) and event wildcard Matthew McGillivray (ZAF). Parkinson will advance straight to Round 3, while Wilson and McGillivray surfed against each other in elimination Round 2

“The idea of retirement has been on my mind for a little while and it is nice to surf my first heat knowing that I don’t have to worry about anything,” said Parkinson. “There is no result, there is no concern over the event. I felt like I was back here as a wildcard, it was almost like a full circle thing. You are back in Heat 6, and I haven’t been in Heat 6 in so long. Maybe last time I was in that heat was in 1999.

“It is such a cool thing to be here for my last event and know that from here on out it is just about enjoyment and surfing, and doing what I love. I really want to watch everybody. The talent on Tour now is so amazing and I am glad I am leaving it in that way. It is one of those things where I will always be a surf fan and I’ll always watch it, but competing just isn’t there for me anymore.”

Wilson went on to battle Jeffreys Bay local McGillivray in Round 2 Heat 1. The nail-biting heat had the home crowd on their feet rooting for the local favorite, but the South African fell just 0.93- points short of defeating the Jeep Leader in his CT debut. McGillivray will exit in Equal 25th place, while Wilson advances to the next round.

“You don’t always know how wildcards surf or how they approach the wave,” Wilson said. “I had a heat with Matthew (McGillivray) earlier and we had a really close heat. We had a good heat again then. He surfs really well. That first heat this morning was the first time this year that I’ve surfed J-Bay with some size. I felt a little bit out of sync, which puts me on the back foot a little bit. I think we have good days of waves ahead of us and I just want to be a part of it.”

Filipe Toledo (BRA), defending event winner and current World No. 2, already set the bar at the Corona Open J-Bay today with a near-perfect 9.17. The Brazilian shot out of a deep barrel to earn the highest score of the day and skip the dreaded elimination Round 2.

“I am so happy to be back,” said Toledo. “J-Bay feels like home for me. The people are so welcoming and warm to me, that is one thing that makes me really comfortable. I love the wave. Who doesn’t? It is good to be surfing perfect J-Bay again. The waves are not as big as last year, but perfect conditions and big barrels on the inside. Last year was definitely one of the biggest wins of my career. It was a really special one and this event has the potential to be another really good one with good waves and good surfing.”

Wiggolly Dantas (BRA), former CT competitor, earned entry into the event as a replacement surfer for two-time WSL Champion John John Florence (HAW). Dantas earned last place in Round 1 Heat 5 against Toledo and Matt Wilkinson (AUS) but redeemed himself in the Round 2 Heat 2 against World No. 3 Italo Ferreira (BRA). The upset will now set Ferreira’s World Title hopes back as he will need a big result at the CT’s next men’s event in Tahiti.

“I am feeling good,” said Dantas. “It is amazing to make it. I am super happy. This morning, I surfed with a different board and changed it for a bigger board for this heat. This board is from last year, where I got third at Haleiwa with this board. I knew this board would work well on my backside. It is good to have an old board that you can trust and try to make those big turns.”

earn a 6.50 (out of a possible 10) and 5.43, giving him a 1.76-point lead over two-time event winner Smith. Despite having the support from the crowd, Smith and February will need to win their elimination Round 2 matchups to avoid an early exit from the Corona Open J-Bay.

“It feels good to be back in J-Bay, it is beautiful and I love it,” said Morias. “There is a bit of confidence and a bit of expectation, as well. I just want to take it heat-by-heat and that is what I did here. I knew the matchup would be a tough one, but I had a few fun waves and my boards felt good. I am stoked.”

“To beat Kelly (Slater) anytime is a huge honor and just to be competing with him is a huge honor,” said Igarashi. “With him and Italo (Ferreira), this was an important heat for a lot of people, and I just stuck to my guns and knew what I had to do. That wasn’t the best heat to open up because it was really windy and hard to surf, but I told myself that I wanted to get angry at it. I’ve been too mellow and it has been too easy. I am 20 years old and on Tour, and it is so fun, but it is about time. It is my third year and I have to do something. Hopefully, I can show it in my surfing and in my results for the rest of the contest and the rest of the year.”

Slater’s return to competition marks one year since his foot injury sustained at Jeffreys Bay in 2017. He will now need a strong performance in Round 2 against Jordy Smith (ZAF) to avoid early elimination when competition resumes.

Gabriel Medina (BRA), 2014 WSL Champion, took down compatriots Tomas Hermes and Miguel Pupo in Heat 4 of Round 1. In a slower heat, Medina earned a collective 11.83 heat total (out of a possible 20), while rookie Hermes and replacement Pupo were unable to challenge.

“It is really windy out there,” said Medina. “I am stoked to get two alright waves. It is so hard to surf, actually. There are waves but it is slow. I am happy to make it through. After Bali, I’ve been home. I’ve been hanging with my friends and family and training. It has been fun. I love being home and it feels good to spend a little time at home. Hopefully, I can get some better waves in the next round.”

The Americans captured some of the day’s top heat totals with Conner Coffin, Kolohe Andino, and rookie Griffin Colapinto all winning their Round 1 matchups. Coffin shined with the day’s highest two-wave total, a 16.14. Andino also took a big win over event wildcard Mikey Wright (AUS) and Patrick Gudauskas (USA). 19-year-old Colapinto managed to clinch a buzzer-beater win in Round 1 Heat 11 to further prove himself amongst the world elite.

“Whenever you get a win like that, it just boosts you big time,” said Colapinto. “That was pretty much my first surf I’ve had out here since I was in Ballito before this. This morning I went out and didn’t even catch a wave. I just got nothing so I was trying to stay busy to feel out my boards. I am bummed about Joel (Parkinson) retiring, but I am also glad that I got to catch him at the very end of his career. It is going to be exciting watching him out here.”

The WSL Commissioner’s Office will reconvene tomorrow morning at 7:30 a.m. local time (SAST) to reassess conditions and make the next call

The Corona Open J-Bay will be broadcast LIVE on the WSL’s Facebook page. Also, check local listings for coverage from the WSL's broadcast partners. Surfline, forecast partner of the WSL, is calling for:

Monday morning starts slow, but new SW swell will build through the afternoon, eventually peaking on Tuesday with offshore wind both days (strong on Monday). A larger SW swell is likely for the 5th (building during the afternoon of the 4th before fading on the 6th). The 7th-11th look relatively slow at this time, with potential for rebuilding surf around the end of the event window.