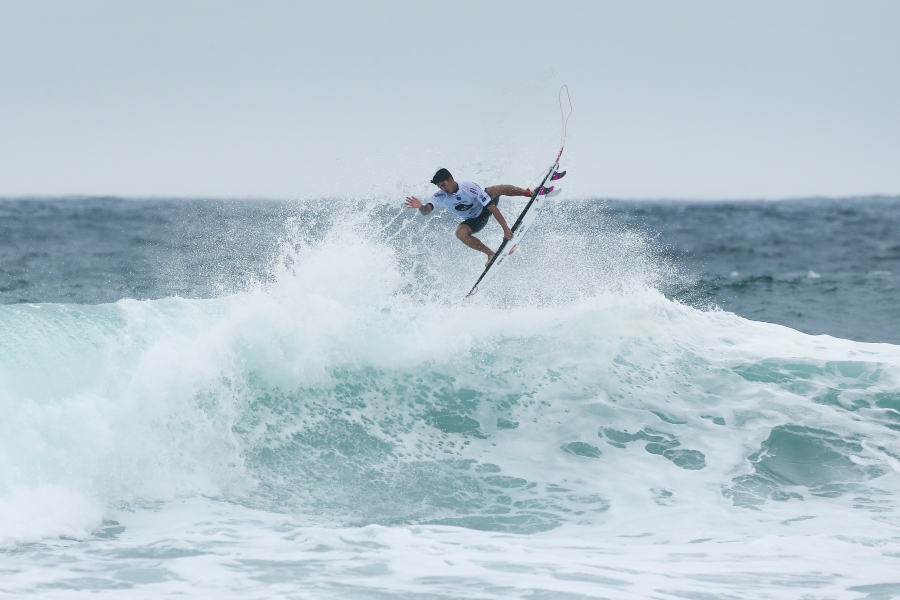 Gabriel Medina is already in the quarter finals WSL

The fourth stop on the 2016 Samsung Galaxy WSL Championship Tour, continued to witness heated match-ups and surprise eliminations in men’s Rounds 3, 4 and 5. The world’s best battled for a place in the Quarterfinals in four-to-six foot (1.5 - 2 metre) waves at Postinho.

Gabriel Medina (BRA), 2014 WSL Champion, secured his place in the Quarterfinals and his best result of the season by landing a perfect 10 with a massive full air rotation in Round 4 Heat 4. With his excellent 18.10 heat score, Medina tasked Michel Bourez (PYF) and 2016 WSL Rookie Jack Freestone (AUS) to find two new scores to escape the combination. Bourez and Freestone were not able to respond. Medina will face the winner of Round 5 Heat 4, which will be determined when competition resumes.
“That was a good heat because there were a lot of waves and a lot of opportunities,” said Medina. “I am stoked to get another 10 and get into the Quarters. Hopefully the waves keep coming. I am feeling good.”


2016 WSL Rookie Davey Cathels (AUS) upset the competition as he dispatched defending event Champion Filipe Toledo (BRA) in Round 5 Heat 2. Toledo and Cathels battled wave for wave throughout the heat. Toledo held control for a majority of the 30-minute bout with a 14.87 heat score, but the Australian surged through with 15.67, narrowly edging out the Brazilian by only 0.80. The win sees Cathels secure his first Quarterfinal berth on the CT while Toledo is eliminated in equal 9th place.
“I didn’t know I was in the lead,” Cathels said. “The first turn didn’t feel that good. When I saw the replay on the beach, it looked better than it felt. I am stoked. I’ve been feeling weird all day and couldn’t find any rhythm. I decided to just change everything, so I sat in a different spot and rode a different board. It just felt better.”

2016 WSL Rookie Jack Freestone (AUS) continued the day’s upsets as he eliminated current No. 3 on the Jeep Leaderboard, Italo Ferreira (BRA) in Round 5 Heat 3. Freestone took an early lead against Ferreira by securing a solid 16.43 heat score, forcing Ferreira to find two new scores. Ferreira attempted numerous aerial maneuvers, but was not able to complete his rides and will walk away with a 9th place finish.
Freestone also eliminated presumed 2016 Title contender Jordy Smith (ZAF) in Round 3 Heat 10.
“I feel really good,” Freestone said. “That was a hard looking heat on paper. I knew it was going to take big scores to beat Italo. He’s been going crazy at the start of the year. I got those two scores at the start of the heat and sat there for twenty minutes. I am looking forward to tomorrow. It’s going to be another big day.”


Adriano de Souza (BRA), reigning WSL Champion, claimed his spot in the Quarterfinals after dominating his Round 4 heat against 2016 WSL Rookies Caio Ibelli (BRA) and Cathels. De Souza charged into the bout with an 8.27 opening ride. With a string of progressive maneuvers the World Champion earned a near-perfect 9.17 to close the heat, trapping the rookies in a combination situation. De Souza will match-up with Cathels in the Quarterfinals when competition resumes.
De Souza previously eliminated Lucas Silveira (BRA), replacement surfer and 2015 World Junior Champion, in Round 3.
“I am so happy I have the momentum,” De Souza said. “This is the best heat I have had this year. I’ve been looking for this for so long. Today was a blast to make two heats, but it was tough. Caio has been crazy this year and Davey has been surfing so well, too. With every single wave I surf I feel the rhythm of the ocean. I just think everything's going my way.”

Round 4 witnessed Dusty Payne (HAW) defeat defending event Champion Toledo and John John Florence (HAW) in the non-elimination superheat. All three surfers took to the air, throwing up radical maneuvers and big scores. Florence locked in solid 7-point rides, securing a 15.20 two-wave score. Toledo attempted progressive airs, but was not able to stick the landing in the critical sections. With a 10.40 heat total Toledo trailed behind Florence and Payne. Payne earned a 7.93, the highest of the heat, but needed a 7.27 to challenge Florence. With one last attempt, Payne landed a 7.67 to narrowly push him over the edge to advance to the Quarterfinals.
“I am stoked to win that heat,” said Payne. “I had two gnarly surfers in my heat. I try to compete with those guys and keep up with them. Even though I am getting older, I am still having fun. Florence and Toledo are unbelievable. I was tripping when they only had 7 and 6-point rides. Usually I get those guys and they drop excellent-range scores. I am just happy it wasn’t too high scoring.”

Florence will join Payne in the Quarterfinals after eliminating Ibelli in Round 5 Heat 1. Following back-to-back losses to Ibelli at Bells Beach and Margaret River, Florence got the upper-hand over the rookie with a 2.83-point lead.
“I am doing what I’ve got to do to get through the heat,” said Florence. “I was just trying to stick to where he was on the banks and keep him off any good sets that came his way. I learned a lot in Australia. I am excited to make that heat against Caio, as he got me the last two times. That was a good win for me. I’m stoked.”
2016 WSL Rookies Ryan Callinan (AUS) and Kanoa Igarashi (USA) were eliminated from the event in Round 3 by Brazilian powerhouses Ibelli and Miguel Pupo (BRA), respectively.
Pupo went on to secure his place in the Quarterfinals after winning through his Round 4 Heat against Ferreira and Adam Melling (AUS). Pupo will match-up against Freestone when competition resumes.

Event organizers will reconvene tomorrow at 6:30am local time for a possible 7am start.