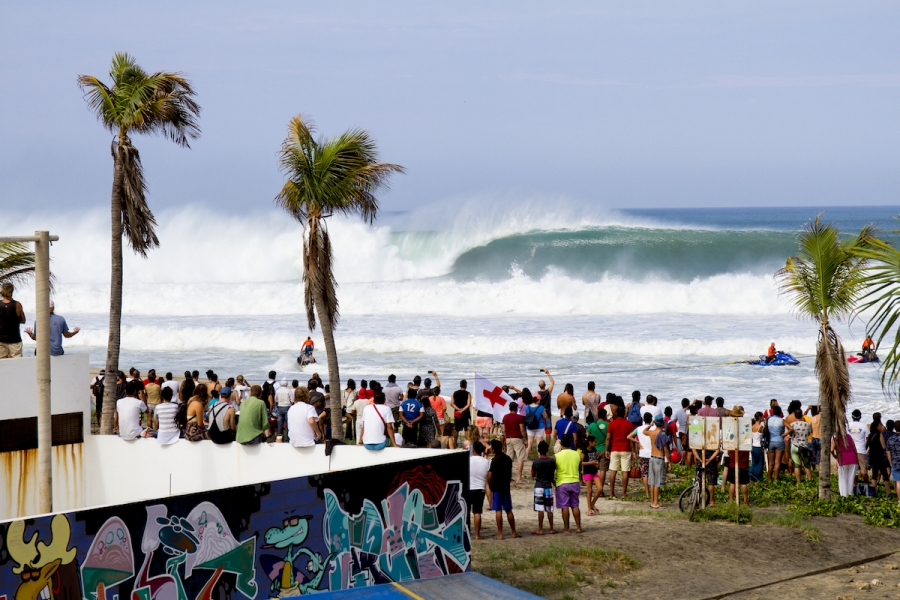 With a perfect barrel in a huge barrel that give him a 10 points ride....

Grant “Twiggy” Baker (ZAF) claimed victory today at the Puerto Escondido Challenge, besting a field of 24 of the world’s best big wave surfers in towering 20-to-35 foot surf off the coast of Mainland Mexico’s Puerto Escondido.
The first event of the 2016/17 World Surf League (WSL) Big Wave Tour (BWT), the Puerto Escondido Challenge, tested the top big wave chargers with enormous and difficult beachbreak conditions. A solid swell from the South Pacific delivered massive surf over two days for the inaugural BWT event at the exceptionally powerful beachbreak known as “The Mexican Pipeline.”
Baker, 2013/14 BWT Champion, put on a stunning performance in Mexico, storming to victory in the Semifinals before his impressive showing in the Final.
“Yesterday was pretty difficult out there so I didn’t have a great heat but I made it through,” said Baker. “This morning when I woke up and saw it was my favorite size for Puerto and I was so happy.”
The South African showcased technical and precise surfing throughout the Final. Baker captured early control over the field and continued to solidify his lead with incredible rides. Baker locked in multiple excellent-range scores, but it was the perfect 10.00 awarded for escaping a massive tube that cemented his victory. Baker’s final combined score was an impressive 27.50 out of a possible 30.
“I’ve been coming here for 20 years and I love it,” continued Baker. “The waves are amazing and I want to thank all the locals for being so hospitable and making us feel so welcome. To my wife and baby at home, this one’s for you.” 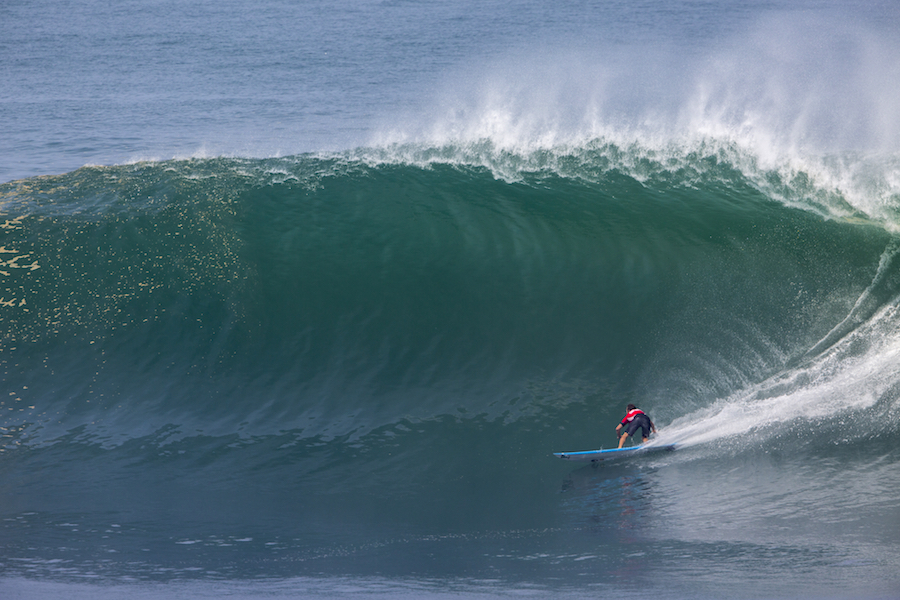 Caption: Grant Baker (ZAF) charges through a massive barrel to earn a perfect 10.00 during the Final of the BWT Puerto Escondido Challenge.  Image: WSL / Hinkle

Baker came into the event as an injury wildcard and his winning performance will kick off his 2016/17 BWT Title campaign with 12,500 points and first place on the BWT rankings.
Baker’s fellow finalists represented elite competitors of the big wave community, including Greg Long (USA), Pedro Calado (BRA), Carlos Burle (BRA), Will Skudin (USA) and Makuakai Rothman (HAW).

Greg Long (USA), two-time BWT Champion, captured second place at the event. Long’s chances were in doubt during the Semifinals when he had yet to catch a wave with five minutes left in the hour-long heat, but his experience at Puerto Escondido let him catch a single excellent-range wave at the last minute which was enough to put him through to the Final over other competitors with two lesser rides. Long’s runner up finish in the Final puts him in  2nd on the leaderboard and in position to defend his existing WSL Big Wave Title.
“I am happy with my result here in Puerto Escondido,” Long said. “I had a couple of really fun waves. I had to work hard for them, but it was worth it. I have a special place in my heart for Puerto Escondido. I came down here for the first time when I was 17-years-old and I am 33 now and I have literally not missed a big swell. This event was pretty spectacular by all accounts and one of the top days I’ve ever surfed.” 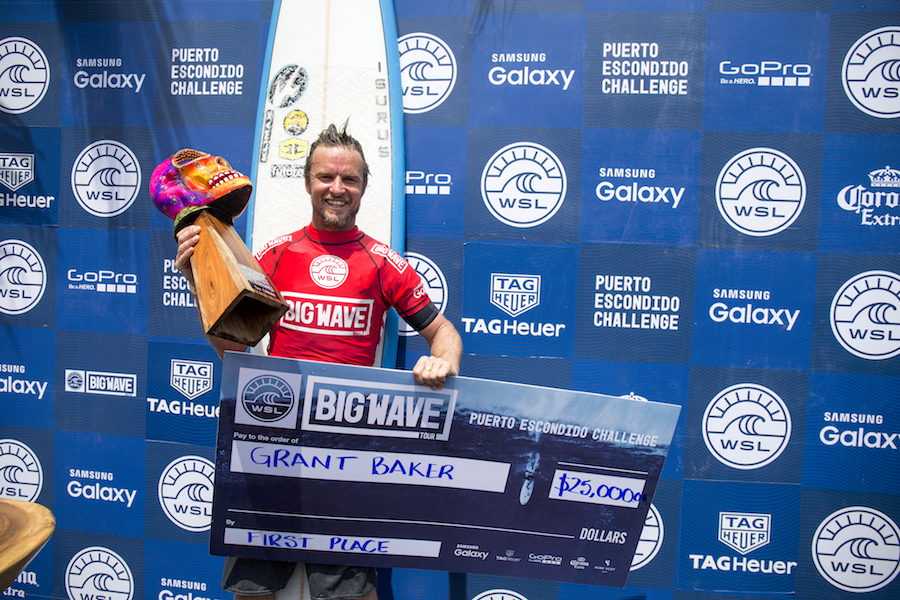 Pedro Calado (BRA) charged throughout the contest to capture the third place position. The young Brazilian cemented his reputation as the best teenage big wave surfer in the world,  demonstrating commitment and fearlessness as he charged through heavy barrels and dispatched top-seeded competitors.
2009/10 BWT Champion Carlos Burle (BRA) rode three waves in the Final for a 16.87 heat total and fourth place.
Will Skudin (USA) finished in fifth place with a 12.97 heat total in the Final. Skudin, a native of Long Beach, New York, carries the torch for America’s East Coast onto the top ranks of the Big Wave Tour in 5th place on the leaderboard.
Last year’s BWT runner-up and 2014/15 BWT Champion, Makuakai Rothman (HAW), suffered an injury twenty minutes into the Final and was not able to come back to the competition. Rothman charged through a deep, heavy barrel, but was wiped out by a powerful wall of water. Rothman was in fine form in Mexico for this event, winning both his Round 1 and Semifinal heats. Rothman will walk away with a 6th place finish and takes 6th on the BWT rankings.
“I just want to apologize for not being able to put on a show for all the folks at home,” Rothman said. “I did my best and I was trying to represent Hawaii. I just went up and over the falls, and my ten-foot-board hit me in the ribs. Thank you to the WSL, this was a great call. Thank you to all the fans out there who make this possible for us and make it possible for us to live our dreams.”

Local wildcards Jimel Corzo and Rogercin Ramirez (MEX) suffered Semifinal eliminations today after a strong performances yesterday. Corzo put up a hard fight until the dying minutes of the heat, but could not close the 2.44 point gap required to advance. Ramirez caught two massive rides in the opening Semifinal heat, but his effort was not enough to make it through to the Final.
Jamie Mitchell (AUS), who gained entry into the 2016/17 BWT as a WSL Big Wave Awards Performer of the Year nominee, suffered a Semifinal elimination today after a stunning Round 1 performance. Mitchell, who posted the best heat score of the event in Round 1 Heat 4, a near-perfect 29.03, but was eliminated in his Semifinal against Rothman, Calado and Burle.
Two events, the Quiksilver Punta de Lobos Challenge in Chile and the Billabong Pico Alto Challenge Peru remain in the Southern Hemisphere window with potential to run, conditions permitting, before the August 31st close of the window. 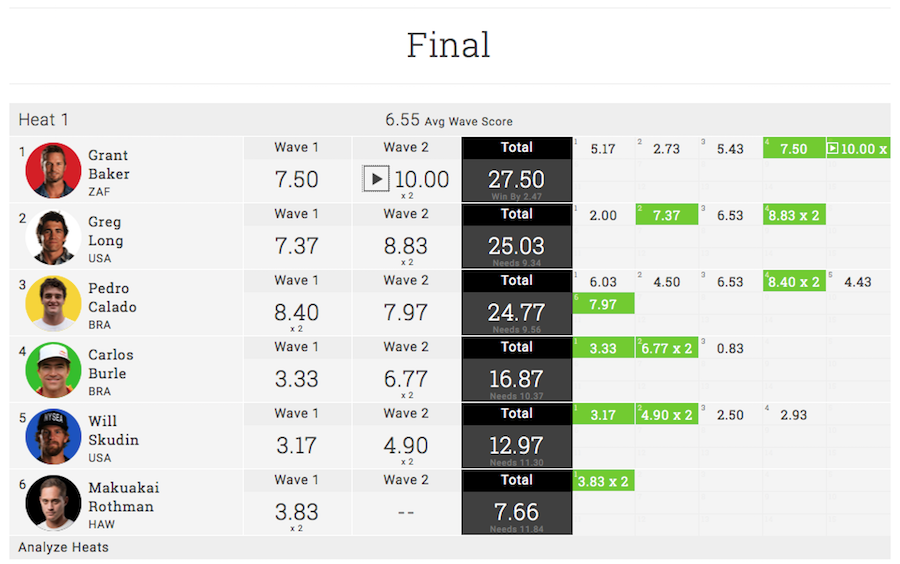