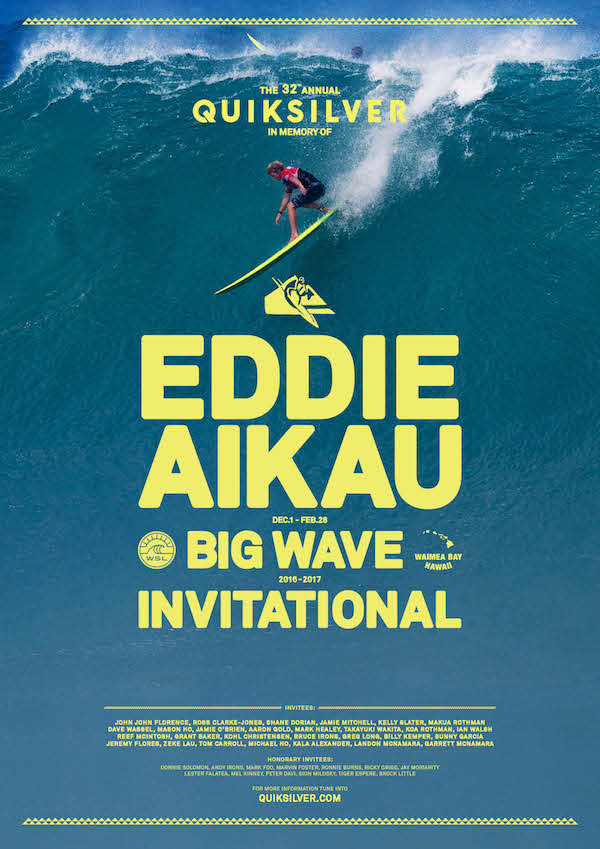 Quiksilver, the Aikau family, and The World Surf League work together to prevent interruption....

...to the Quiksilver in Memory of Eddie Aikau Big Wave Invitational and announce invitees and opening ceremony date

Quiksilver and the Aikau family have amicably resolved their differences, ensuring that the 2016-2017 Quiksilver in Memory of Eddie Aikau Big Wave Invitational occurs starting on December 1, 2016.

Quiksilver and the Aikau family have worked constructively together for the past several weeks in an effort to avoid interrupting the 31-year track record of the event being held. With the support of The World Surf League (WSL), which will produce the event and manage the broadcast and media, the event will proceed.

Beginning in 1985, the Quiksilver In Memory of Eddie Aikau Big Wave Invitational has been an invite-only big-wave event that takes place at Waimea Bay on the North Shore of Oahu, where the late Eddie Aikau served as the North Shore’s first lifeguard. Opting only to run when conditions reach the 20-foot-plus range (Hawaiian scale—40-50 ft faces), The Eddie has only run nine times in its history. As a WSL specialty-sanctioned big-wave event, The Eddie has drawn a prestigious cross-section of the world’s finest watermen, including competitors from the elite WSL Championship Tour (CT). The event is famous for its traditional opening ceremony, live broadcast and incredible atmosphere.

“We are proud to see the tradition of The Eddie continue without interruption—a testament to our respect for Eddie Aikau, the Aikau family, the Hawaiian people, and the community at large. We are very grateful for the efforts and support of the Aikau family and the World Surf League under the leadership of Paul Speaker who have all worked very hard with our team over the past few weeks to come up with a solution”, said Pierre Agnes, Quiksilver’s CEO. Agnes added “Consistent with Quiksilver and the Aikau family’s   wishes, we are pleased to confirm that the same stringent condition requirements we  instituted when we inaugurated The Eddie 31 years ago will continue this year. We have every confidence that WSL’s greater involvement in the event this year will only improve The Eddie’s reputation as one of the world’s premier surfing contests.”

"The WSL has tremendous respect for the legacy of Eddie Aikau and the prestige of this special event in his honor," Paul Speaker, WSL CEO said. "The League regards it as a privilege to support and participate in the Quiksilver In Memory of Eddie Aikau Big Wave Invitational event and we look forward to the upcoming winter season."

Eddie Aikau surviving brothers and sister, Solomon, Clyde and Myra, expressed their relief at the Aikau Family, with the cooperation of Quiksilver, the World Surf League, and the City and County of Honolulu, were able to overcome the logistical and other obstacles that stood in the way of the Quiksilver In Memory of Eddie Aikau Big Wave Invitational being held this year in a manner that would maintain the integrity and Hawaiian spirit of the competition.

The Aikau Family’s strong commitment to keep Eddie’s legacy, aloha spirit, Hawaiian culture and Hawaiian traditions alive is at the heart of the surf contest named in his honor and the work of the Eddie Aikau Foundation. In that spirit, with women’s surfing reaching new heights, the Aikaus are excited to announce their decision to include a woman athlete on this year’s alternative list – the first in the history of The Eddie.

The invitation list this year is as follows: (listed first name alphabetical order)

The Quiksilver in Memory of Eddie Aikau Big Wave Invitational opening ceremony will commence at Waimea Bay, 3pm on December 1st, 2016. A significant number of the world’s greatest big-wave surfers will gather to show there respect for one of their heroes, Eddie Aikau.