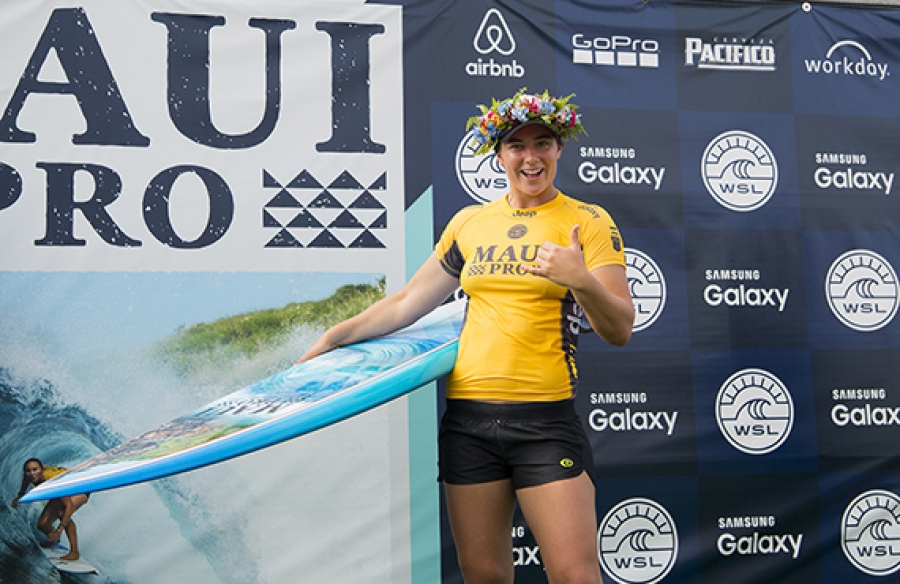 “I was watching the ocean and I really thought that something was on its way,” Wright said. “Once I’m on the wave, I’ve never had a problem but working with Micro (Glenn Hall) has really helped put me in the right spot and allow me to make the most of the opportunities that come my way.”

The win today caps off an incredible season that saw Wright claim her maiden WSL Title and five CT victories (Gold Coast, Margaret River, Rio, Trestles and Maui). Today is also Wright's best result at Honolua Bay and the first time that she has got the better of opponent Moore in a Final after eight match-ups.

“This event allowed me to get a block of work done to get ready for next season,” continued Wright. “With the title done and dusted we were able to work on some other things which is great. Now I’ll go home, have a break and spend some time with friends and family. It’s honestly incredible, and it’s been a fantastic year. Thanks to everyone who’s put in the extra effort for me - my crew and everyone at home.”

“Inspiration for this event has been learning and that has been the undercurrent for everything I’ve done this year,” Wright said. “There were a couple of rocky first rounds, but then I pulled it together today. Honestly, Carissa (Moore) and I have had eight finals together and she has gotten me in seven, which is pretty incredible. Carissa has just schooled me every year and this is the first year that I have come out knowing that I had to get the work done to reach that standard of being a complete and well-packaged World Title contender. I think we will have many more fun battles to come.”

The Final saw Wright and Moore each open with a small score until an exciting exchange witnessed Wright post a 6.83 while Moore was rewarded with an excellent 9.00 for a series of big turns. Wright was in need of a 3.68 and she took off on a wave with priority with just two minutes remaining, while Moore took a wave directly behind her. Wright got the better of the exchange with a critical 7.83 to earn the win.

Moore, the two-time Maui Women’s Pro winner, took down fellow Hawaiian Malia Manuel (HAW) in the Quarterfinals with the highest score of the contest, an excellent 9.57, before defeating Courtney Conlogue (USA) in the Semifinals. Today’s runner-up finish is her third Final appearance of 2016 and sees her conclude the year in third place on Jeep Leaderboard.

“This is one of my favorite stops on tour and It is so good to surf in home waters,” said Moore. “I am super stoked to make it to the Final with the support of my family and friends. Every year on tour you learn a lot about yourself and I have become more self-aware. I am working through and learning some different things that I am looking forward to putting together for 2017.”

Keely Andrew (AUS) has had an incredible run of form throughout the contest, eliminating six-time WSL Champion Stephanie Gilmore (AUS) in Round 4 before dispatching Coco Ho (HAW) in the Quarterfinals and then battling eventual winner Wright in the Semifinals. An early 8.00 from Wright left Andrew chasing down a big score that she wasn’t able to find despite staying busy. The young Australian is eliminated in Equal 3rd place, her best ever result on the CT, to solidify her place as 2016 WSL Rookie of the Year and finish the year at No. 14 on the Jeep Leaderboard.

“I'm super happy with how that went,” Andrew said. “I couldn't have had a better event. To get to show my best surfing yet was really great. I proved to myself that I belong here. It was a tough year so it’s nice to know that I'm capable of getting into the Quarterfinals and I hope to take that confidence through to Snapper. It's very special to be Rookie of the Year - it's a once-in-a lifetime thing and I grateful that I've put my name on that list.”

Semifinal 2 was a clash of the titans with Courtney Conlogue (USA) taking on eventual runner-up Moore. Conlogue remained scoreless through the opening half of the heat while Moore made the most of the conditions to find two good scores, including an excellent 8.17. With 8 minutes remaining, Conlogue managed to break the combination with a 5.90 but was left chasing an 8.11 to turn the heat. Conlogue held priority as the clock wound down but couldn’t find the opportunity and finished the Maui Women’s Pro in Equal 3rd place, matching her best result at Honolua Bay, a Semifinal berth in 2014. Conlogue rounds out the year as runner-up on the Jeep Rankings.

“This year was a great season and I learned a lot from it,” said Conlogue. “I’m stoked to be working with the amazing people I’m surrounded by. I’m so happy for Tyler (Wright) - she’s had an amazing event and season. Now it’s back to the drawing board and I’ll be getting ready for next year. My form is feeling great and I’m working on some crucial stuff that I think will really make a difference next year. All the Top 17 are next level so there’s no gap or room for errors so I’ll be trying really hard next season.”

Bianca Buitendag (ZAF), who needed to win the event to assure her place on the CT in 2017, was eliminated in the Quarterfinals by Conlogue, despite holding the highest score of the heat, an 8.00. Buitendag finishes the year in 12th place on the Jeep Leaderboard, just outside the top 10, and will not rejoin the WSL Top 17 next season.

“My performance in this event has been better than I expected,” Buitendag said. “I was quite down after having a few Round 2 losses so I came here with nothing to lose. I think that different approach really worked out so I might try that again. I think I’ll give the QS a shot so I might be back on tour, I might not. I’ve still got the desire though.”