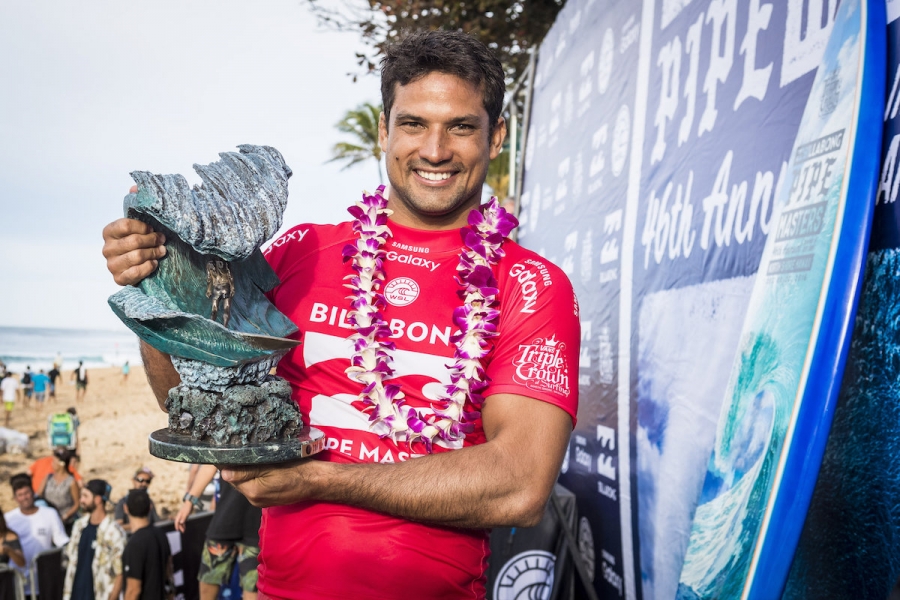 The win today is the best result of the season for Bourez and only the second time that the Tahitian has made it into the final series this year. Victory today also marks the third CT victory of his career. Bourez earns himself 10,000 points and finishes the 2016 season in 6th place on the Jeep Leaderboard.

“I still don’t believe it,” said Bourez. “I’m just happy to be here. Last year I got injured and it was really tricky and tough for me to come back. I almost dropped off tour. I worked really hard at home and tried to stay positive the whole time. I had my baby after Portugal, so I had to travel back and forth during Europe, which was tough.
“It never stops - it’s already the end of the year now and it’s going to start again soon,” Bourez continued. “I’m just going to regroup and have a really big party tonight. I’m super tired but the year’s over now. This is huge for me.”
Bourez, who previously dispatched Kolohe Andino (USA), John John Florence (HAW) and Filipe Toledo (BRA) before taking on Igarashi in the Final, can add a win at Pipeline to previous wins at Haleiwa and Sunset. Only Derek Ho and Andy Irons have also achieved this feat.

“John [Florence] is incredible,” said Bourez. “I’ve lost the Triple Crown twice because of him so that was a little payback. I knew I had to push my level even higher to beat John so that’s what I did. We had such a good day today - Backdoor was pumping and I’m stoked. This is the biggest event to win for a surfer and I did it!”

The Final match-up saw slower conditions but a dramatic finish, as Bourez took the win over Igarashi by only 1.36 points. Bourez was quick to post scores and settled for a 5.00 early in the heat. Igarashi waited until the five minute warning to make his first move, a combination maneuver for a 4.17. With Bourez holding priority, Igarashi snuck in a 2.00 barrel ride in the dying minutes of the heat. Bourez secured his win with a 2.53 at the buzzer, leaving no time for Igarashi to respond.
In his first Pipe Masters appearance, Igarashi has set the bar for the 2017 rookies. At 19-years-old, Igarashi is the youngest competitor on the CT and made a splash this season. Today’s runner-up finish marks Igarashi’s best result this year after a run of 13th place finishes on tour and a 9th at the Quiksilver Pro Gold Coast. Igarashi took down 11-time WSL Champion Kelly Slater (USA) and Jordy Smith (ZAF) before facing Bourez in the Final. Igarashi moves up to 20th on the rankings.    “This is a dream come true,” said Igarashi. “To be in that Final with Michel [Bourez] was really cool. It is something I will never forget. The one moment that really stands out to me is in the Semifinals with Kelly [Slater]. I kind of rubbed the heat off and he was in his rhythm. A big set came in that closed out everywhere and I thought that was going to be my last chance. Right at the end, this crazy wave out of nowhere came in. I laughed because I did not believe it. I stalled as hard as I could and once I came out I fell into shock. I am really proud of myself and cannot wait for next year.”

A nail-biting Semifinal match-up witnessed the rookie take down Slater, the ultimate CT veteran. Slater looked unstoppable with an excellent 8.10 on his opening ride and solid 6.90. Needing an excellent 8.83, Igarashi sat patiently with priority. With time winding down, it looked to be Slater in the Final. In the last thirty seconds, a set out the back lined up perfectly for Igarashi whose Hail Mary barrel ride earned him the required score, an 8.83, to advance to the Finals.
Slater, the most dominant surfer in this event with seven Pipe Masters titles, will end his season with a 3rd place finish. Slater’s 2016 season saw him claim victory at the Billabong Pro Tahiti and a 3rd place result at the Fiji Pro. The American superstar will start the 2017 season in 6th place on the rankings.

“It’s Kanoa’s day, I hope he wins,” Slater said. “It’s his first time in the Pipe Masters and he’s made the Final, which is pretty sick. He just won the Triple Crown for John [Florence] and put Zeke Lau on tour. Both the Finalists have been really on fire today. I did everything I possibly could in that heat to win but the waves just came to Kanoa. I’m excited for next year. I’m feeling pretty good and I’ve been making some headway with getting myself physically into shape. I think I’ve been surfing well. It’s turning more and more into a chess game now and that’s how heats are playing out.”

2016 WSL Champion John John Florence (HAW) was eliminated by Bourez in the Quarterfinals. Florence got off to a quick start with a 7.33 and 6.67, but Bourez flew out of Backdoor barrels for two excellent 8-point rides and the win.
Although Florence will end his season with a 5th place at Pipe, the Hawaiian has made history with his win at the Quiksilver in Memory of Eddie Aikau Big Wave Invitational earlier this year, clinching of the World Surfing Title in Portugal and victory at the Hawaiian Pro, the first event of the Vans Triple Crown of Surfing. Florence will lead the elite 34 coming into the 2017 season, which will kick off on the Gold Coast in March.
“It’s been the best year of my life and thank you to everyone that has supported me,” said Florence. “I have had an amazing year and it was a little unfortunate that in that heat I made a couple of mistakes. The waves are really fun right now and I am just stoked to be home and to finish the year. It has been a long year. Now I can just go surfing and take a break for a while.”
Kolohe Andino (USA) was also edged out by eventual winner Bourez in a tough Semifinal match-up. Andino took the early lead with a 13.93 combined score, but Bourez locked in a 15.37 for the slight advantage. The American previously dispatched 2010 Pipe Master Jeremy Flores (FRA) in Round 5.
Andino’s strong 3rd place finish at Pipe marks his best result at this event. In addition to his great finish on the North Shore, Andino locked in a second place win at the Quiksilver Pro Gold Coast. Andino will be one to watch in 2017 and ends this season in fourth place on the Jeep Leaderboard.

En route to the Final, Igarashi took down CT charger Smith in the Quarterfinals. The heat saw a Backdoor shootout as both surfers escaped massive barrels. Igarashi weaved his way through an incredible tube to earn a near-perfect 9.93 and an excellent 8.10. Smith was close behind with a 7.57 and 8.17, but fell short of advancing to the Semifinals. The South African finishes the year as runner-up on the Jeep Leaderboard after his 5th place finish at the Billabong Pipe Masters.
“We come here to get barreled and that is what happened,” Smith said. “He [Kanoa Igarashi] just got more barreled than I did. I think it just came down to that one last score. I gave him that wave on the inside that apparently just kept funneling across. The wave looked very small to me when I paddled in, but apparently he got nice and deep. To be honest, all around it has been an amazing year for me. This time last year I did not expect to be here and I just came fresh off an injury. To finish in second is amazing.“
Bourez also dispatched Filipe Toledo (BRA) in Round 5. Toledo, who earned the event’s only Perfect 10 in his heat against Bourez, will finish his year with a 9th place finish and 10th place on the Jeep Leaderboard.
The world’s best surfers will return in 2017 with the kick-off event on the Gold Coast in Queensland, Australia in March.