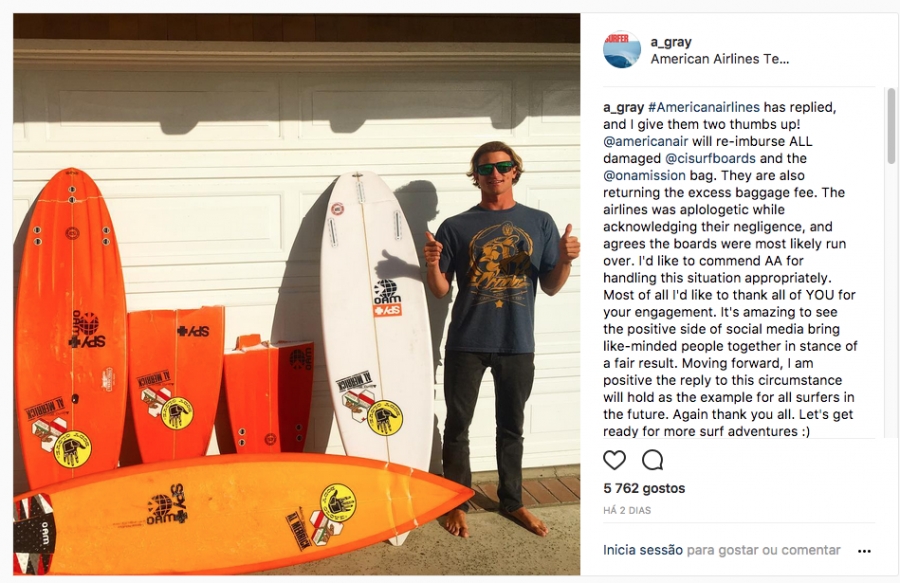 A little over a week after pro surfer Alex Gray took to Instagram to detail how American Airlines completely destroyed four of his surfboards on a flight from Honolulu to Los Angeles, American Airlines has agreed to reimburse him for all damages...

Over the 7 of April, when pro surfer Alex Gray landed in Los Angeles from Honolulu, he found that American Airlines had completely destroyed four of the five boards he had brought on his flight

Some of his boards were broken in the nose or tail, but one of them, very specifically, was split in the middle and seemed to have been removed from the bag. Gray even said that there was an act of "bad faith" in which his surfboard appears to have been run over by a car or other ground support vehicle at the airport.

Faced with the thousands of followers of Gray in the Instagram (more than 81.000), the episode was much comented and generated strong critics to the North American company. The incident will cost the airline $ 3,500, in one of the few answers that are known in favor of the consumer and surfers in this type of situation.

Part of this money Alex Gray plans to donate to the Jimmy Miller Foundation, a non-profit organization that provides ocean therapy to war veterans and children. The free surfer also intends to recover the boards, repairing them, then offering them later through giveaways that will on his Instagram account.

Anterior Do Seas Make Us Sick? Surfers May Have the Answer Próxima International Finals Rip Curl Grom Search 2017 will be performed in Maresias