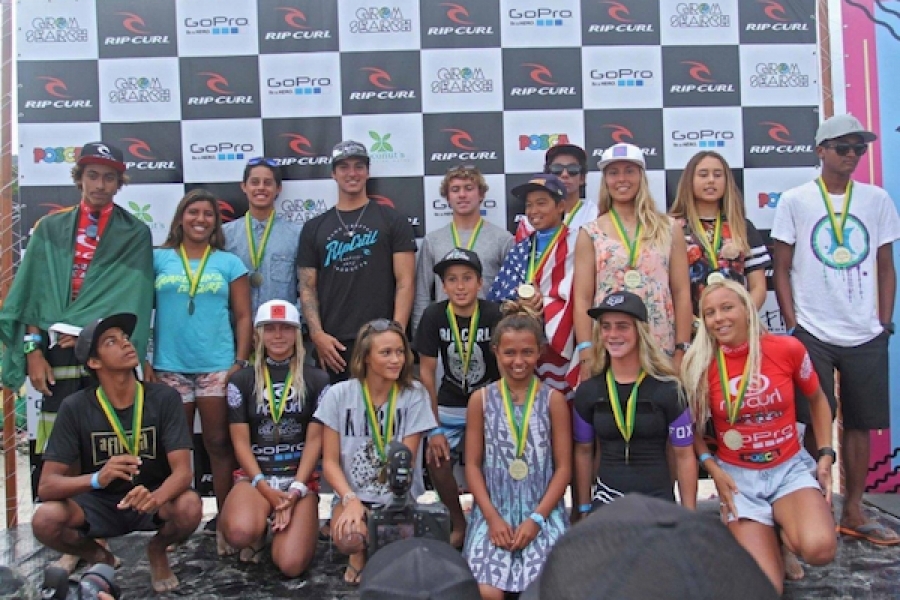 ATHLETES TO MAKE A COMEBACK TO BRASIL; CERIMONY WILL BE PLACED IN MAY 2ND IN COCONUT´S HOTEL

For the second time, Brazil will receive the International Finals Rip Curl Grom Search 2017, gathering the world´s best under 16 surfers.

Once again the competition will be performed in Maresias´ Beach, coincidentally the “house” of the only two brazilians that held the cup, Gabriel Medina, in 2010, and Samuel Pupo, in 2015, precisely during the contest in São Sebastião.  Presented by Coconut´s Maresias Hotel, the International Finals Rip Curl Grom Search 2017 brings 16 athletes from eight countries, from Argentina to Indonesia, defined in selectives performed in their own regions.

The return of the event to Brazil was inspired by the creation of Gabriel Medina Institute in the same Maresias, for the qualification of new values of surf. The project´s head office will be one of the event´s “stage”, among with windows of contests between May 3rd and 7th.  The official opening is settled to be on May 2nd (Tuesday), in the poolside at Coconut's Maresias Hotel, seafronted, from 4 PM.

Before that, in GMI´s head office, the “embassor” of the competition, Gabriel Medina, will attend the press conference, at 3 PM, remembering the contest of this title and his future plans.  The contests happens in two days, when the sea presents ideal conditions during the “waiting window”. All the athletes will be hosted in Coconut´s Hotel, the event´s “headquarters”. In days off, activities will be attended by the athletes, especially the ones involving surf in North Coast of São Paulo´s spots, besides physical training in GMI.  “It will be a pleasure to receive once again the world´s best surfers until the age of 16 here in Brazil. The International Finale´s Circuit Rip Curl Grom Search is one of the major´s competition of the world, that reveals this new generation.

This year the athletes are able to count with all the structure from Gabriel Medina Institute and from Coconut´s Hotel. The presence of Gabriel Medina is also very important, especially because he has already won this competition”, says Rip Curl´s Marketing Manager, Fernando Gonzalez.  Brazil will also be represented by the Rip Curl Grom Search 2016´s champions, who also attended the finals in Maresias:

born in Imbituba, in the state of Santa Catarina, Leonardo Barcelos has 100 per cent record, and Louisie Frumento, from Guaruja, São Paulo. She´s also one of the 38 athletes that currently makes her trainings at GMI and counts with all the support and incentive from the locals.

The green and yellow team will get two wild cards, selected among the surfers from the Institute.  In the confirmed list there´s also Yael Pena, in Spain, Ellie Turner, from the UK, Rio Waida and Dhea Nastasya, both from Indonesia, Caleb Cutmore and Elin Tawharu, from New Zeland, Kade Matson and Caroline Marks, from the USA, Jay Brown and Sasha Beker, from Australia, and the argentines Gaspar Larragneguy and Catalina Mercere.  HISTORY – Held since 2005, the International Finals Rip Curl Grom Search has in its own champions´ gallery names that prove the success of the event.

Some examples are the australian brothers Owen and Tyler Wright (currently world Champion of WCT), respectively in 2006 and 2007. The owner of the first male title contest was the hawaiian Mason Ho. The italian Leonardo Fioravanti has conquered the title in 2013. Among the girls who held the cup, the hawaiians Alana Blanchard (2006), Tatiana Weston-Webb, two-time Champion in 2012 and 2013, and australian Niki Van Dijk, champion in 2009 and 2011.  In 2015, in Maresias, Brazil came back to celebrate the highest spot in podium in the finals of Rip Curl Grom Search International, with Samuel Pupo.

The local young talent won and had convinced in the competition, getting the right to conquer two 10 grades and impeccable performances. Among the girls, Leilani McGonagle, from Costa Rica, was the winner.  The contests happened in two days along with good waves. In the first day, a heavy sea, with 5 to 6 feet curling (about two meters) and in the second, more aligned, with three to four steps (one meter) and excellent graduation. In the finals, Samuel overcame north american Kei Kobayash, while Leilani defeated australian Jaleesa Vincent.