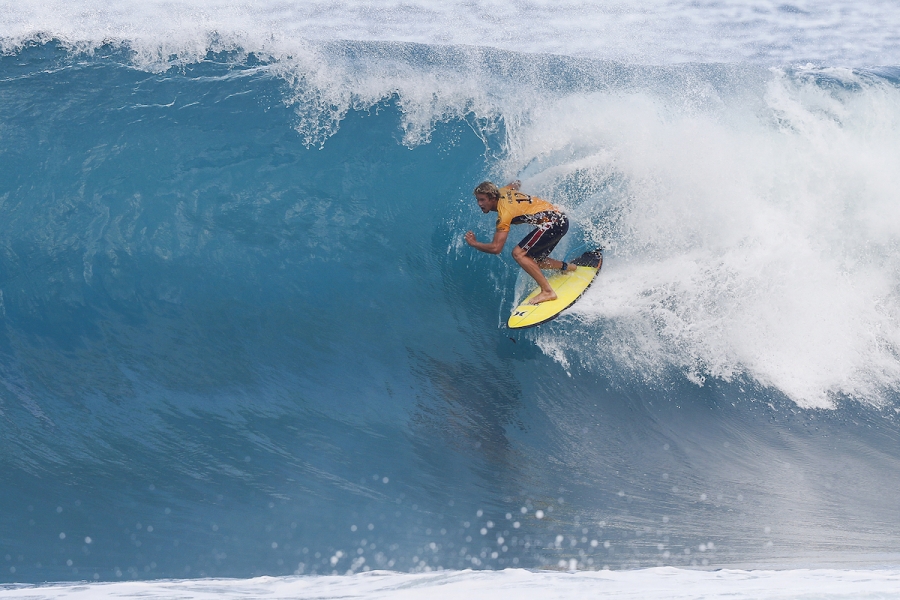 The Billabong Pipe Masters in Memory of Andy Irons, the final stop on the 2017 World Surf League (WSL) Championship Tour (CT) and the third gem of the Vans Triple Crown of Surfing (VTCS), kicked off  with incredible Pipeline barrels...

...for the opening round of competition. The world’s best surfers lit up the beach in the first nine heats of Round 1 in solid eight-to-ten foot (2.4 - 3+ metre) conditions at the world-famous Banzai Pipeline.

Current No. 1 on the Jeep Leaderboard John John Florence (HAW) was the first surfer in Heat 6 to post a score. With cheers from the beach, Florence started his world title campaign and quickly built his scoreline to a solid 13.50 (out of a possible 20) to take top position over Pipe Invitational winner Dusty Payne (HAW) and Brazil's Wiggolly Dantas (BRA). Wearing the Jeep Leader Jersey, Florence looked confident and in rhythm at his home break and kept busy throughout the 30-minute match-up to secure his place in Round 3 and move one step closer to defending his World Title.

“I feel like a little kid again doing this event, just getting to surf Pipe with no one out,” said Florence. “I was just getting so many waves like, ‘This one might barrel!’ I like it when it's like this, it changes it up, a peak here and peak there, you can kind of sneak underneath ones. It makes it really fun and it makes it interesting because you can get that one random, really crazy one.The support here makes me even more psyched. Just coming down the beach earlier and everyone screaming -- it just makes me more excited. Coming into Pipe this year is a lot different than last year because last year I felt more relaxed having the title already. So this year is a little different preparation." 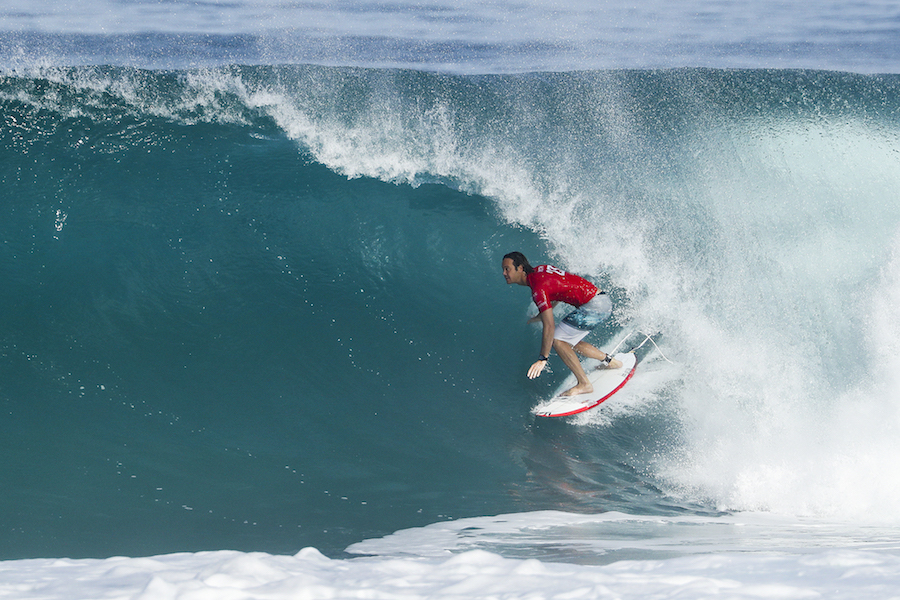 WSL Title contender Jordy Smith (ZAF) was one of the standout performers of Round 1 and claimed a commanding win over Bede Durbidge (AUS) and Ethan Ewing (AUS) in Heat 4. An excellent 8.67 combined with a 7.90 put the World No. 3 firmly in the lead. Durbidge mounted a comeback with less than five minutes remaining but it wasn’t enough and Smith sailed through to Round 3.

"I think the noise is pretty quiet,” said Smith. “I don't really get too deep into the pressure and quite frankly it really boils down to those two guys (Florence and Medina) losing out early, but you never know. If they wobble then I'll put my head down and give it a go."

Conner Coffin (USA), who currently sits at No. 21 on the Jeep Leaderboard right on the requalification bubble, needs a strong result to solidify his place on the CT in 2018. Coffin got his campaign off to a good start today with a Round 1 win over WSL title contender Julian Wilson (AUS) and Stu Kennedy (AUS). Wilson, current world No. 4, suffered an interference penalty that put him out of contention, while an injured Kennedy wasn’t able to get out from under competitors. Wilson, 2014 Billabong Pipe Master, who could claim his maiden world title with an event win, is relegated to elimination Round 2 where he will face the newly crowned WSL Hawaii/Tahiti Nui Regional Champion Benji Brand (HAW).

Coffin is riding high after he took the victory at Sunset Beach for the Vans World Cup, event no. 2 of the Vans Triple Crown of Surfing. “It's definitely really nice to win especially when you're right on the requalifying bubble and last place sucks, but I'm not thinking about that when I'm out in the water,” he said. “It’d be huge to win the Vans Triple Crown, so many of my favorite surfers have won the Triple Crown and Hawaii is my favorite place to compete in the whole world, so to get a win at Sunset was unreal. My family came over here now and we’re all just hanging at the house.”

Wildcard and Pipe Invitational runner-up Brand took an early lead over Brazilians Gabriel Medina (BRA) and Miguel Pupo (BRA) in Round 1 Heat 5. Pupo moved up into second place with a near-perfect 9.93, the highest single-wave score of the event so far, for a late takeoff into a cavernous Pipeline barrel and narrow exit.

"I was just happy to get a sick wave,” said Pupo. “I went out there looking for Backdoor and ended up just surfing Pipe waves, which is kind of funny. Always when you get a good score everyone knows you need to back it up straight away. I was trying to do that but there's not many opportunities out there. I kind of fell, had a couple mistakes, but finally got that one at the end.” 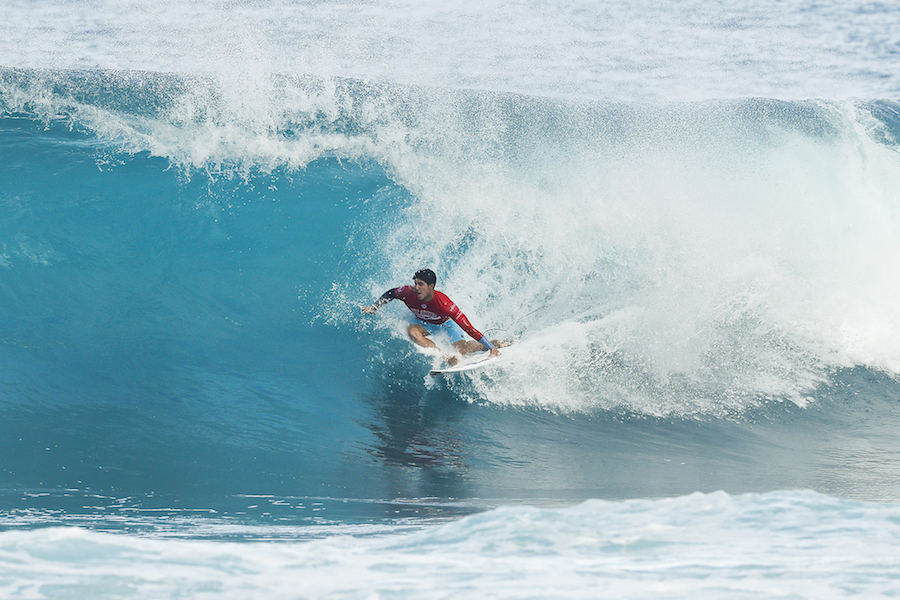 WSL title contender and No. 2 on the Jeep Leaderboard Medina also put on the pressure with an excellent 8.50. In the end it was Pupo, who is battling for requalification, who stole the win to directly advance to Round 3 with a 4.90 during the final exchange, sending Medina and Brand to elimination Round 2.

"The pressure for requalification is through the roof right now,” continued Pupo. “But I have my family with me and every time I see my little girl, the pressure goes away and I'm only thinking about her and how happy she is to be in Hawaii, and my wife too, and all the pressure goes away somehow. When I got out there I was just trying to do my best. I wanted Gabby (Medina) to keep going in the event to win the title, but I had to do my job to keep my job for next year. I think all the guys in front of me made it so it's a good first round but still a lot of steps to go." 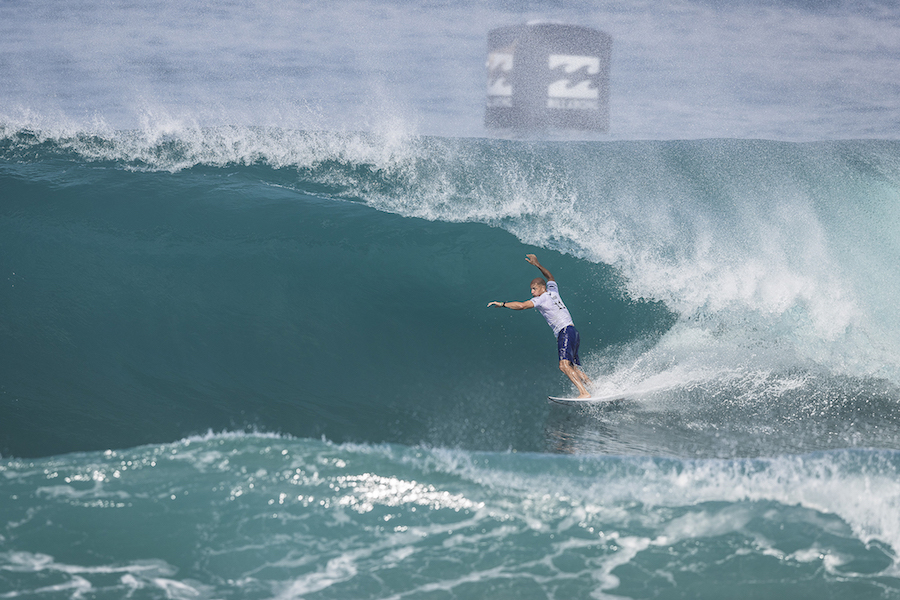 11X WSL Champion and 7X Billabong Pipe Master Kelly Slater (USA) made a triumphant return to competition today, wearing the jersey for the first time since July when he injured his foot in Jeffreys Bay, South Africa.

“I give the foot about a 65 percent,” commented Slater. “I've missed competition but after so many years of nonstop day in, day out, week in and and week out, it's been kind of nice to have a few months off. It's nice to get back, but it's nice to get away from something that you love and get back and appreciate it."

2010 Pipe Master Jeremy Flores (FRA) opened the day with a win over Jadson Andre (BRA) and Matt Wilkinson (AUS) in Round 1. The lower-scoring heat saw Flores post a 10.17 combined score for the win and the opportunity to skip straight to Round 3.

"No one knew what to expect in that heat,” said Flores. “When there's such a big event coming up with all the scenarios and stuff, there's so much hype around the event. I'm stoked, we got here today and the waves are pumping. So I didn't go surfing this morning. I was super excited, but I didn't want to get too excited and lose energy. It wasn't a great heat, I wish I got some of those bombs. I'm stoked to get a win."

Hawaiian Ezekiel Lau (HAW) used his home court advantage to take down competitors Filipe Toledo (BRA) and Michel Bourez (PYF) in Heat 9, the final matchup of the day, with a combined two-wave score of 10.50.

“I'm just super happy to be home and competing in front of my home crowd and get my first Round One win, I'm stoked," said Lau. "This is the first time I've done a contest where I don't have to think about anything else, just surf and show up and enjoy being in the event and performing in front of a home crowd. So that's all I'm thinking about. I just want to put on a good performance and represent.”