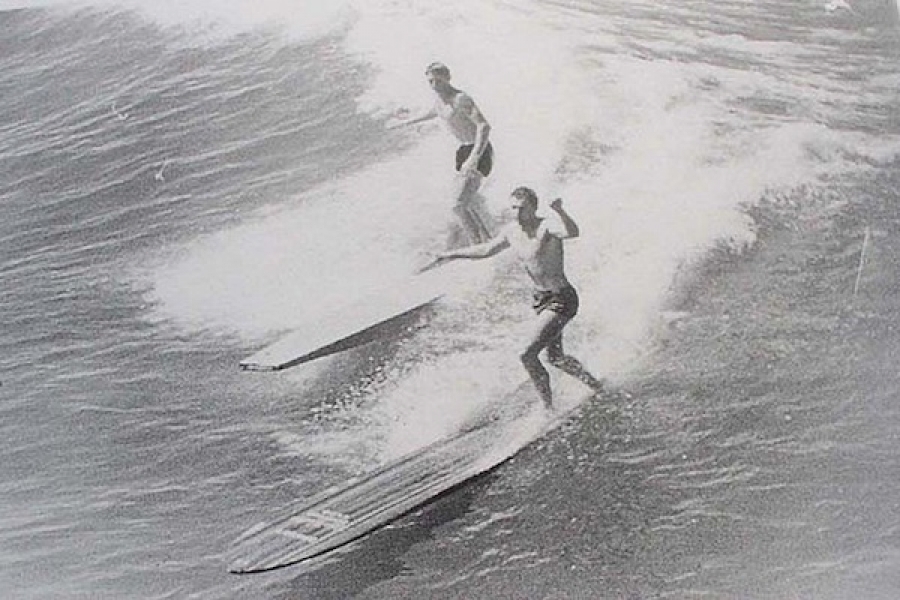 Video shows surfing at Hermosa Beach, California, in 1947, in color. Also the construction of a surfboard.

Jeff Quitney Shows surfing at Hermosa Beach, California, in 1947, in color. We can also see the construction of a surfboard. Footage with no sound
History and origins of surfing

For centuries surfing was a central part of ancient Polynesian culture. Surfing might have been first observed by Europeans at Tahiti in 1767 by Samuel Wallis and the crew members of the Dolphin who were the first Europeans to visit the island in June 1767.

Another candidate is the botanist Joseph Banks being part of the First voyage of James Cook on the HMS Endeavour, who arrived on 10 April 1769 on Tahiti. Lieutenant James King was the first one who wrote about the art of surfing on Hawaii when completing the journals of Captain James Cook upon Cook's death in 1779. When Mark Twain visited Hawaii in 1866 he wrote, "In one place we came upon a large company of naked natives, of both sexes and all ages, amusing themselves with the national pastime of surf-bathing."

References to surf riding on planks and single canoe hulls are also verified for pre-contact Samoa, where surfing was called fa'ase'e or se'egalu (see Kramer, Samoa Islands) and Tonga far pre-dating the practice of surfing by Hawaiians and eastern Polynesians by over a thousand years. George Freeth (November 8, 1883 -- April 7, 1919) is often credited as being the "Father of Modern Surfing". He is also thought to have been the first modern surfer. In 1907, the eclectic interests of land baron Henry Huntington brought the ancient art of surfing to the California coast. While on vacation, Huntington had seen Hawaiian boys surfing the island waves.

Looking for a way to entice visitors to the area of Redondo Beach, where he had heavily invested in real estate, he hired a young Hawaiian-Irish athlete, George Freeth, to demonstrate the art of surfing. As a child in Hawai'i, Freeth had seen an old Polynesian painting that depicted his mother's ancestors riding surfboards. Freeth decided to revive the art of surfing But had little success with the huge 16-foot hardwood boards that were popular at that time.

When he cut them in half to make them more manageable, he unwittingly created the original "Longboard", which made him the talk of the islands. To the delight of visitors, Freeth exhibited his surfing prowess twice a day in front of the Hotel Redondo...

Anterior Father of 6 children dies while surfing in Sunset Cliffs, California Próxima FOUNDERS’ CUP OF SURFING EVENT WILL HAPPEN IN MAY 2018