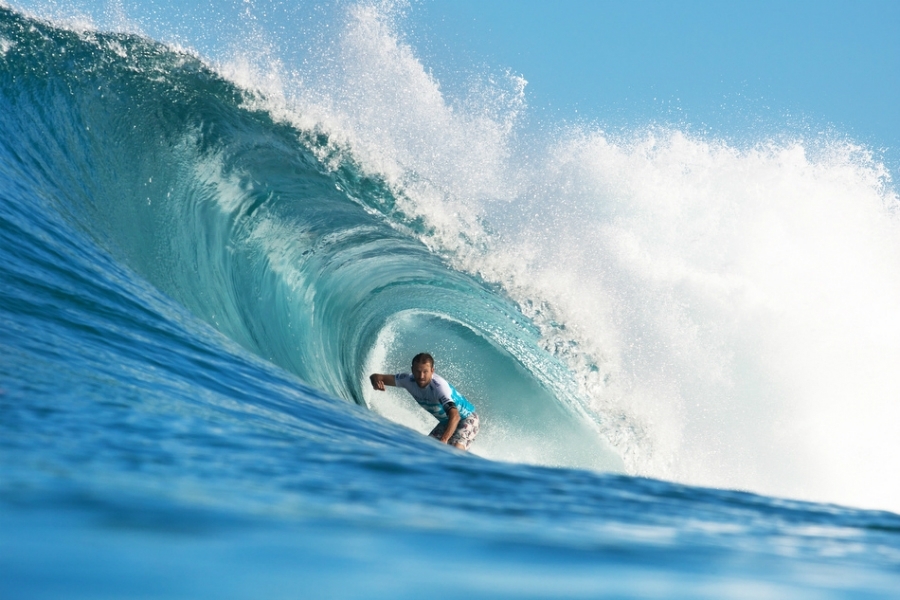 Kieren Perrow (AUS), 36, had planned on retiring following the completion of the 2013 ASP Season, shifting in to a full-time role as the new ASP Commissioner. Unfortunately for the Australian charger, his career would not end as he’d envisioned. Perrow would dislocate his shoulder in Round 1 of the Billabong Pipe Masters while driving through a Backdoor barrel, exiting the last heat of his career in agonizing pain.

With a Pipeline victory in 2011 and a runner-up finish in 2010, Perrow entered Round 1 of the Billabong Pipe Masters as an event favorite. Perrow drew dangerous Hawaiian Rookie Kaimana Jaquias, 20, in Round 1 and the rookie got off to a strong start, leaving the veteran in need of an excellent score in the back half of heat. Perrow thought he had found the wave needed to survive his Round 1 clash, taking off deep on what seemed to be a perfect backdoor barrel. Unfortunately for Perrow, he would be violently launched from his board while searching for an exit from the tube, simultaneously dislocating his shoulder.

“I took off pretty deep and I could see when I was in to this final section that there was this turbulent foam ball patch that you need to get over in order to come out,” Perrow said. “The wave exploded and lifted me up off of my board at the same time as I was lifting my arm up and it just ripped my arm out of its socket. That’s the best way to describe it.”

After examination from medical staff, Perrow’s diagnosis was both a dislocated shoulder and broken bone which will require surgery and several months of rehabilitation.

Between 2002 and 2013, Perrow competed in nine seasons on the ASP WCT, earning the coveted Rookie of the Year award with an incredible 7th place finish in his first season among the elite. Perrow would go one step further in his Sophomore year, finishing at a career-high ASP World No. 6 in 2003 and would go on to claim the prestigious Billabong Pipe Masters Title in 2011. Perrow would deliver incredibly consistent performances at all venues across the globe and while the natural-footer’s fame was often earned for his prowess in heavy waves, Perrow dismantled several of the world’s best surfers well in to the latter rounds at Lower Trestles, Bells Beach, and other high-performance ASP WCT venues.

In addition to his obvious talent in the water, Perrow has played a vital role in the development of professional surfing. KP worked as the Surfer’s Representative for several years to make daily event calls while helping to implement new rules and ideas that have shaped the sport in to what it has become today.