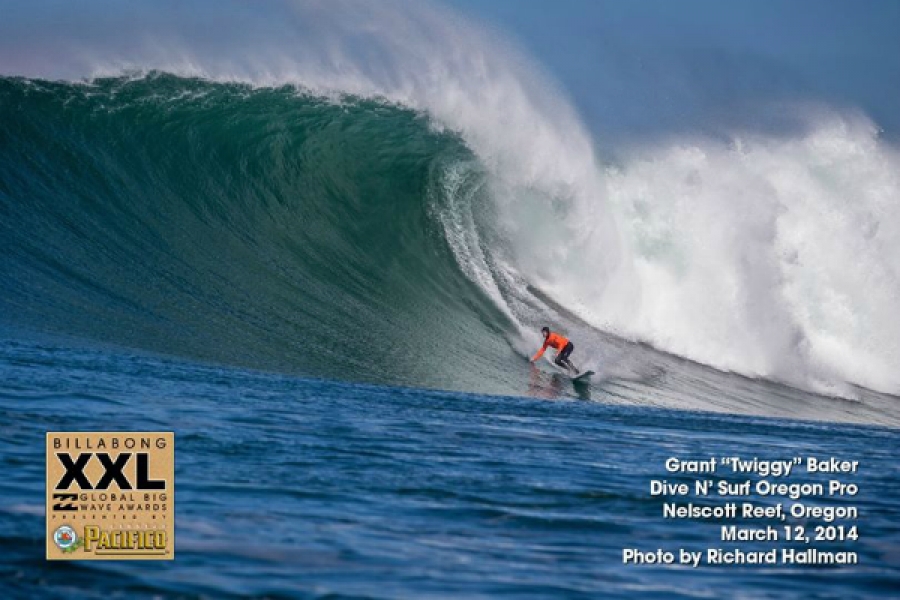 The official anouncement is yet to be made, but Grant already speaks as a world champion

After the Dive ‘N’ Surf Oregon Pro came to a close yesterday, Alex Gray taking the gold, the rankings for the Big Wave World Title were solidified. Grant “Twiggy” Baker is standing at 2000 points, with the closest contender, Ken “Skindog” Collins, at 1059.38. This means (unofficially) that Twiggy has won the race and will take the title of the 2013-2014 Big Wave World Champ.


"I don’t think anyone can beat me, even if Todos runs, so I’m sure they’re going to come out with a press release soon. It’s quite hectic with these events because the same guys that are running the contest are also on the jet skis and are the guys that have to do the press. It’s hard for them to get stuff out as quickly as we’d like", Baker said.


"I’m very stoked. I don’t sound stoked because I’m in a crowded waiting area at the Portland airport, but I promise I am. To keep South Africa as a name on the surfing map is my driving force, and to have Bianca come second at the Gold Coast was amazing as well. We’re looking forward to Jordy doing really well this year. It’s great, it’s great for our country and for me, personally. Winning is a big milestone. And Bianca donating her prize money is incredible… she’s obviously making a lot more money than I am!", stated 'Twiggy'.


Grant spoke about women's first competition ever on the Big Wave World Tour: "I think it’s fantastic that girls are getting into the BWWT. The way that they’re surfing is amazing to watch, and they’re all very good looking now. It’s a great spectacle, really. I’ve always had a lot of respect for girls that surf in the first place, especially in South Africa, and to see them do well internationally is fantastic."


Asked about the Todos los Santos event, Grant believes it's going to happen: "We hope so. There’s still two weeks left in the waiting period, and there’s some action in the North Pacific. So there’s a good chance that it could run".


With the ASP taking over the big wave champioship, Grant thiks that things will get better. "More prize money and better webcasting. We’re so excited. We needed the structure and the backing of somebody like the ASP, and this year has been a learning curve and a transition period. Come next year, it’s all guns blazing. I’ve already picked up some new sponsors, and it’s making the waves already."


Baker believes that with a more professional structure, the guys on the big wave world tour will remain the same. "We’ll never change our personalities to suit the governing bodies. It’s something that will bring a new identity to the sport, and big wave surfing is very sexy at the moment. Hopefully we can bring that to the ASP, and add to it, instead of vice versa. And with that we want to embrace the guys who have been on the mainstream tour who are interested in big wave surfing, and have proved themselves, like Kelly and John John. With the infrastructure, we’ll be able to get some new locations online… we’re looking at Fiji, Puerto Escondido, Cortez Bank… and we think they’ll start taking place in the next few years. Ideally, we want six events in the northern hemisphere and six in the southern."