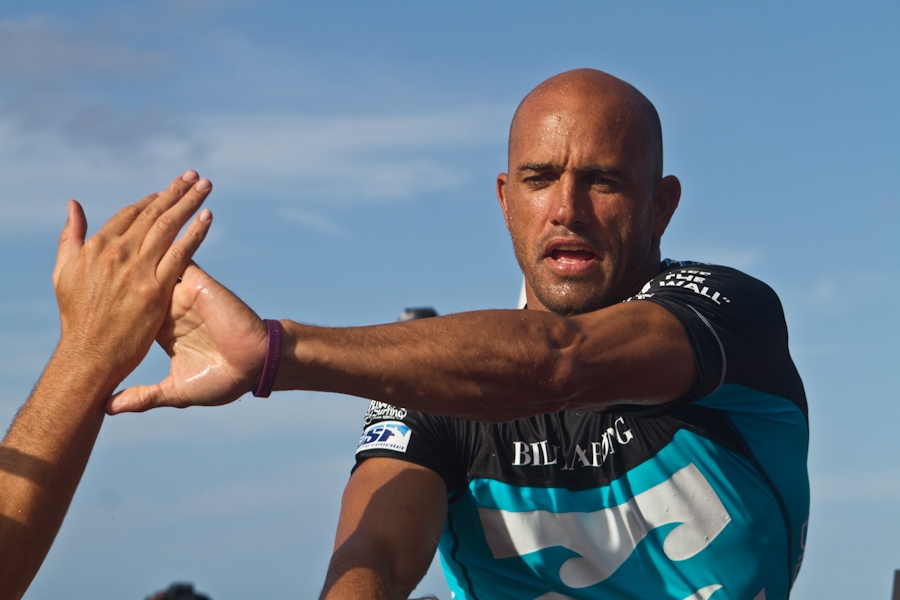 The final day of the Billabong Pipe Masters capped off the 2013 ASP World Championship Tour (WCT) season in fine style, with epic conditions providing the ideal backdrop for the crowning of Mick Fanning (AUS), 32, as the ASP World Champion. It also finalized the ASP Top 34 roster for 2014. Fanning finished third overall, defeated by Florence in their Semifinal.

“It was a strange Final,” Slater said. “John John (Florence) and I both waited for a while and neither of us really got a score until late in the match. I knew it was going to be a sprint and it was probably a little advantageous not to have priority in the Final as I was able to go for a lot of waves instead of wait for those that took a while to eventuate.”

With tens of thousands packing the beach at Pipeline, and the gravitas of Slater’s 56th elite tour victory apparent, the greatest athlete the sport has ever produced was emotional on the final day of 2013.

“The crowd today is the biggest I have ever seen at Pipe,” Slater said. “It’s unbelievable. I woke up in the dark and my friend Ross Williams was at my house saying he couldn’t even get his bike on the road to ride over here. We’re so excited to be here at Pipe, especially when the waves are good. All the people on the beach and online and watching on television make it that much more exciting.”

Speculation surrounding Slater’s eventual departure from the ‘Sport of Kings’ has been present at the season-ending event for the past several years, often supported by questions regarding motivation, legacy and physicality. The iconic American addressed these rumors unprompted today while on stage collecting his seventh Billabong Pipe Masters trophy.

“Last year, someone asked me what excited me in the end years of my career and I said I would like to surf a Final at Pipe against John John (Florence) so that’s pretty special today,” Slater said. “To win is even better. I want to surf against the best surfers at the best waves – that’s why I’m on tour. I was obviously emotional today, especially after Mick (Fanning) clinched the title in the Quarters. I don’t know what happens for me in 2014 but I think that has pissed me off just enough to come back.”

“Today was one of the most special days in my life,” Slater continued. “It’s a day I have dreamed about since I was a little kid – big, perfect, West-angled Pipeline and a showdown at the Pipe Masters. If I had stepped away from the sport five years ago, I wouldn’t have had today. I want more days like this so I’m definitely back next year.”

Fanning’s road to the 2013 ASP World Title was nothing short of spectacular on the final day of competition. Finding himself behind during both his Round 5 and Quarterfinals bouts, the iron-nerved Australian nailed huge Pipeline scores in both occasions to take the heat wins and his third world surfing crown.

“I’ve never put myself in the same circles as Tom Curren and Andy Irons,” Fanning said. “Tom (Curren) is such an enigma and was so instrumental to injecting style into our sport. Andy (Irons)…what hasn’t been said about Andy? He was such a legend and he was such a good friend. I’m honored to be a part of this group. I was happy with one title and I was overwhelmed with two. With three? I don’t have words for that.”

Today marked John John Florence’s second Vans Triple Crown Title, but his runner-up in the final event forces him to hang on to his life-long dream of one day hoisting the Pipe Masters trophy. The youngster, who lives right here at Pipe, battled Slater with a series of exciting exchanges during the final 10 minutes, coming painfully close.

“This is my second Triple Crown but it feels pretty special,” Florence said. “The first year, I wasn’t really thinking about it. I was young and just having fun. This year, I came into the Triple Crown wanting to win it, but I honestly didn’t think I had a chance until we got to the final day at Pipe. This result has me motivated for next year. It’s eating my inside how close I was, but I’m still stoked.”

Joel Parkinson (AUS), 32, defending Billabong Pipe Masters Champion, took a Quarterfinals victory over Brazilian Miguel Pupo (BRA), 22, but fell to Kelly Slater in the Semifinals. Parkinson posted two solid scores of his own in the bombing Pipeline conditions, but was unable to put a stop to a near-perfect heat from Slater.

“I would have liked to make it to the final just to surf more perfect waves,” Parkinson said. “Kelly was always in the right place and no matter where he paddled waves were coming to him. I never ruled myself out, because I knew if I could find a 10, then it’d be game on again. It was one of those ones where the two best surfers of the whole event ended up in the final together.”