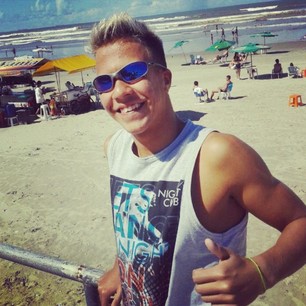 Leonardo Menyon became the hero of the day at São Paulo.

During the second stop of the Paulista Championship of Surf, surfer Leoardo Menyon had a remarkable gesture.

During a quarter final heat, Leonardo saw a man screaming and about to drown. Without thinking twice, Menyon abandoned the heat and went straight towards the man, in Pitangueiras beach, at Guarajá.

“I caught a wave early but then I saw a guy screaming for help and really struggling,” the 17-year-old told the Globo news portal. “I gave him my board and told him to be calm, to breathe. We were hit by three big waves. I thought he was going to die but I held him above water by his neck and pushed him to the shore.”

Menyon’s heroic act left him with only minutes to return to the water before his allotted time expired. He was eliminated after being unable to make up the points gap to rivals Samuel Pupo and Edgard Groggia.The teenager’s selfless act quickly hit social media circles Saturday.

“More than a great surfer, you are an exemplary human,” said Twitter user @felipebvisuals. “The life that you saved today is worth more than any championship title.”