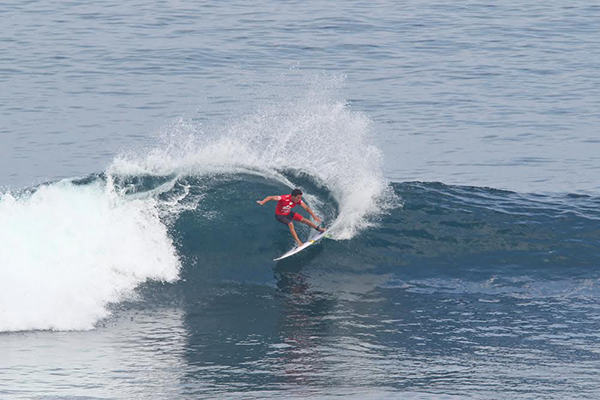 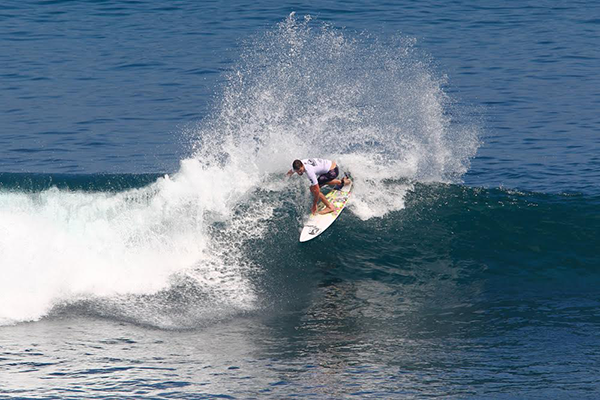 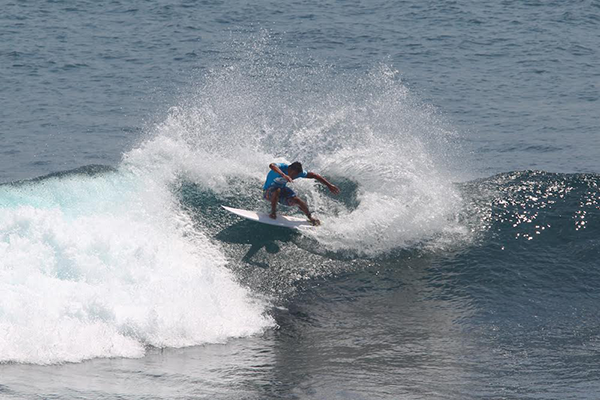 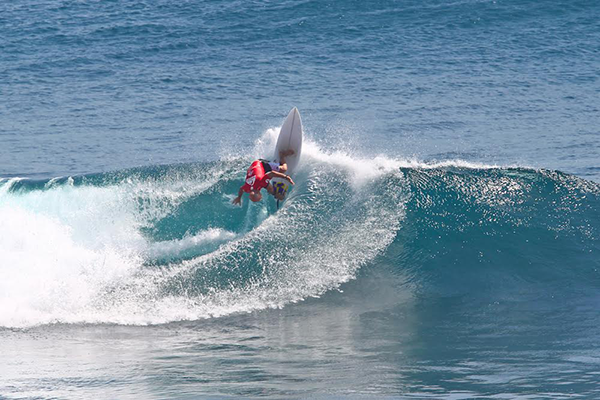 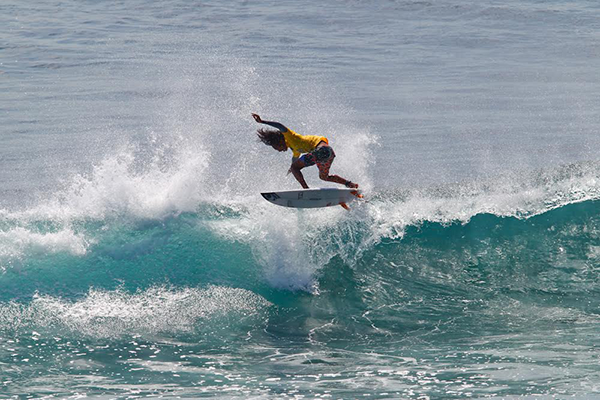 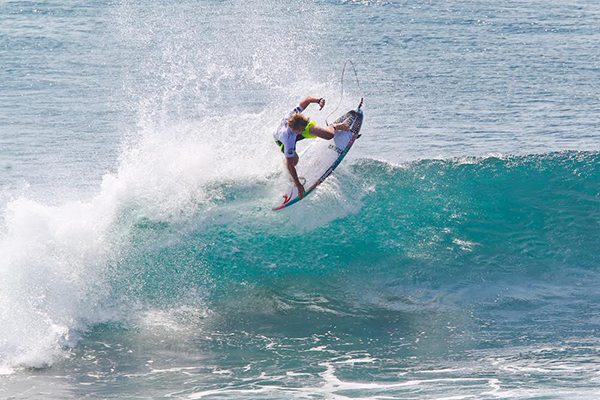 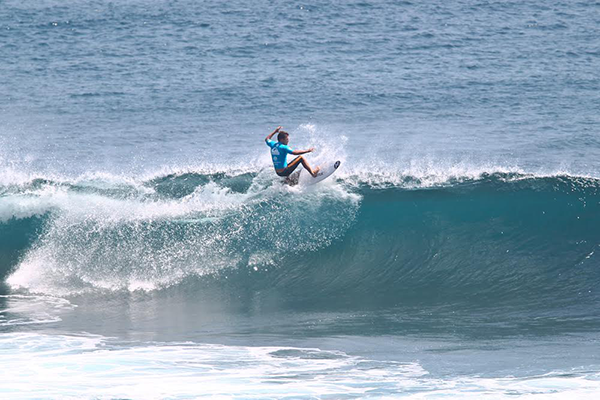 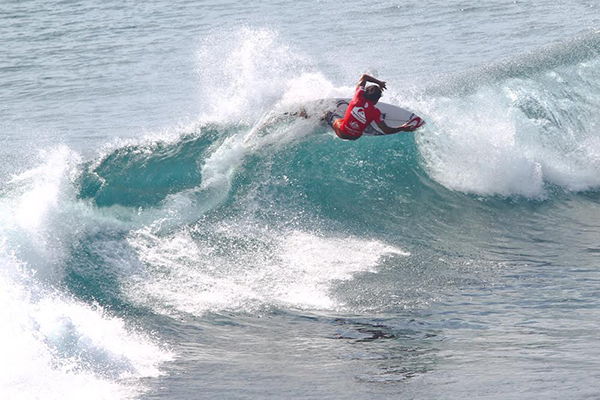 Though the swell had dropped a bit overnight, the incoming tide pushed some very clean 3- 4 foot waves through the Peak and sliding down the Racetrack to start Day 3 of the Quiksilver Uluwatu Challenge presented by Coca-Cola Amatil Indonesia and the Australian Embassy Jakarta, and sanctioned by the World Surf League (WSL) and the Asian Surfing Championships (ASC).

Nolan Reposa (USA) was happy to take the first heat win of the day as the action got started at 9:00 am with heat 14 of the Round of 64.  “It was really fun out there, a bit smaller but still really good, so I’m glad to get through and get another chance to surf out there again,” said Reposa who hails from Los Angeles.  He also won his Round of 32 heat to advance to the Round of 16.

In the hotly contested Heat 2 of the Round of 32, wave selection was the deciding factor for Indonesians Dede Suryana and Raditya Rondi who failed to progress, going down to Australian’s Tim MacDonald and Curtis Ewing.  “I started the heat with two good scores to lead the heat, but I couldn’t seem to find that one good wave that would give me the big score I needed,” said Suryana.  “I only needed a 5 to get from 3rd to 2nd, and I kept trying but just couldn’t get it.  Since this is my sponsor’s event I really wanted to get into the final, but I just didn’t happen for me today unfortunately.”

In the very next heat is was another pair of Australian’s, Monty Tait and Jared Hickel, who advanced by knocking out former WSL World Tour surfer Damien Hobgood and local ripper Mega Semadhi from Bingin.  “I’ve surfed this place since I was a kid and I love it,” said Semadhi.  “When Bingin was flat I’d come here to Ulu’s and surf, because there was always waves here.  It’s one of the best spots in the world I think.  I’m bummed not to make it through today, as I only needed less than 5 points to take over 2nd, but that’s competition right?”

In the later going with the tide dropping and the swell becoming less consistent, Heat 6 saw Nick Vasicek choosing to sit up at the Peak all alone while Uluwatu local Alik Rudiarta got busy on the inside Race Track. As Rudiarta racked up heaps of smallish scores and the early lead, the others waited patiently and were eventually rewarded with the bigger set waves.  With his first wave Vasicek took over the lead posting a 7 pointer, until ex-World Tour surfer Jake Paterson paddled up and proceeded to smash one to bits, earning him 8 points and second place.  Then in the dying seconds he locked into another beauty that got him the lead and the heat win.

“I had a really slow start and the tide was dropping fast, and I was riding a step up so everything was going against me,” said Paterson.  “So I paddled up the point at the halfway mark and got that set wave that allowed me to open on that bigger board…glad the judges liked it!

Last but not least, the one for the highlight reel was Garut Widiarta’s miraculous last-minute, come-from-last-to-first win in Heat 8.  After speeding all over the lineup and trying every combination of maneuver without putting many points on the scorecard, he was in last place needing a 9.1 to advance.  The ocean was pretty much flat but then small bump appeared so he took off, and like magic it jumped up to give him a clean barrel section and a long wall that he ripped apart all the way to almost dry reef, earning him a 9.4 and the heat win.

“There were no waves for like 10 minutes, nothing at all” said Widiarta.  “So there was like 2 minutes left and I actually just gave up already, but saw that little one and said what the hell…I have to do something...and it gave me a 9.4.  So stoked I get to surf again tomorrow!

After today’s action, of the 16 competitors left to fight for the top spot on the podium tomorrow, 8 are from Australia, 4 are Indonesian, 1 from Brazil, 1 from Japan, 1 from Uruguay and 1 from USA.

Competition will be completed tomorrow, with the four heats of Round 4 getting underway at 8 am, then moving on to the man-on-man quarterfinals, semifinals and the final in the afternoon.

There will also be a special Expression Session tomorrow afternoon with Quiksilver and Roxy legends and team surfers.