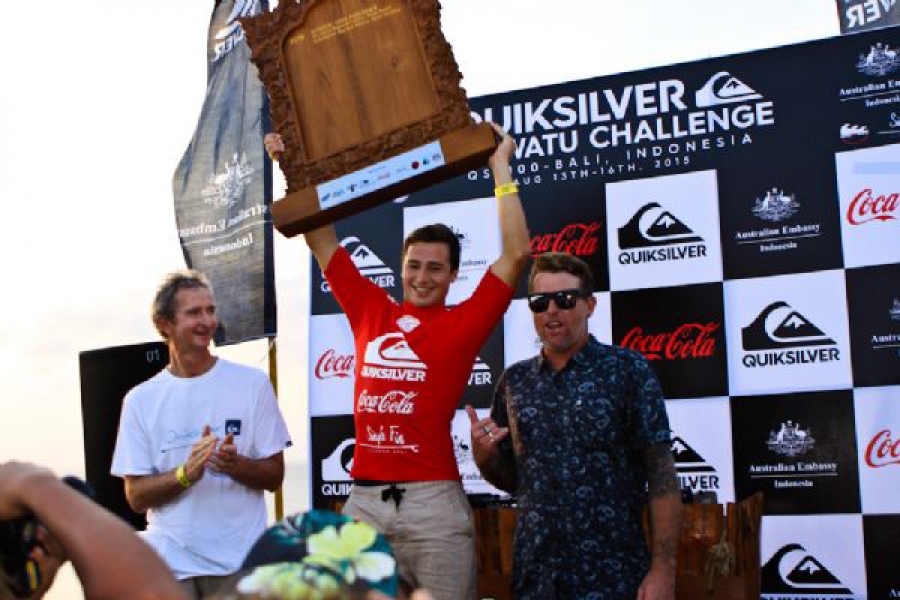 After four days of great waves and hard fought heats the 2015 Quiksilver Uluwatu Challenge presented by Coca-Cola Amatil Indonesia and the Australian Embassy Jakarta has come to an end with Australia’s Jared Hickel (Cronulla, NSW/AUS) defeating Jean De Silva (Brazil) in the Final.

This is the best result of Hickel’s career and will see the 17-year-old join elite group of QS1,000 winners. Hickel’s powerful forehand attack saw him post solid scores seemly with ease. His 8.00 was the highest single wave score of the final and was the difference between the two surfers.

“This was my first final, let alone a QS final, so I’m so stoked to be here and to have had such fun,” Hickel said. “This is my fourth time to Bali, and have surfed here at Uluwatu a lot of times, as it’s one of my favourite waves in the world. When I paddled out, it was so shallow and I didn’t really know where to sit, but I sort of found a little peak and then Jean (De Silva) and I swapped waves, and I was stoked to get a couple. I didn’t know I had the Final won until the buzzer went off really, because I knew that if Jean if got the wave, he’s such an amazing surfer, he could have won it for sure.”

Jean De Silva went into the Final as a red hot favourite after posting two excellent 9-point-rides in his semifinal win over Marco Giorgi (URY), but momentum swungaway from Silva as he struggled to find the right waves to open up and unleash his big turns.

“I’m really happy to be competing here in Uluwatu, it’s been the best event of the year for me,” Silva said. “Hopefully Quiksilver can put on an even bigger event here next year, but I’m so happy they put it on for sure. I was happy with my performance during the contest, as I felt like I put up a lot of good scores. I was feeling good, and it was great to see the other guys surfing good as well. That’s the great thing about when the waves are good and everybody is ripping, we can all put on a good show. I was happy to make it into the final, and happy for Jared that he won it. I was looking for the win of course, but it was great to hear the cheers of the crowd.”

The Quiksilver Uluwatu Challenge ran during a four day window from August 13-16 as part of the 8th annual Quiksilver and Coca-Cola Amatil Indonesia, Bali's Big Eco Weekend Event, which takes place this year during Indonesia’s Independence Day long weekend. Bali's Big Eco Weekend highlights the need to keep Bali's beaches clean and safe for everyone to enjoy as well as promoting an active and healthy lifestyle through the various surfing events and beach activities that take place through the course of the event.