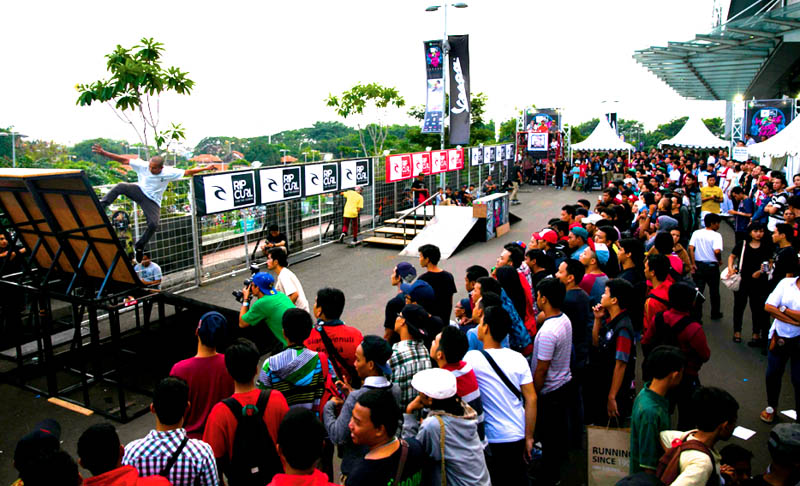 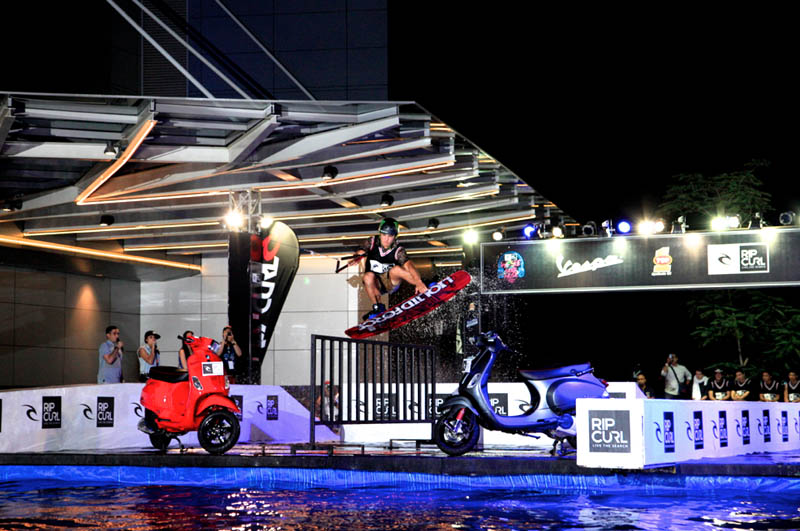 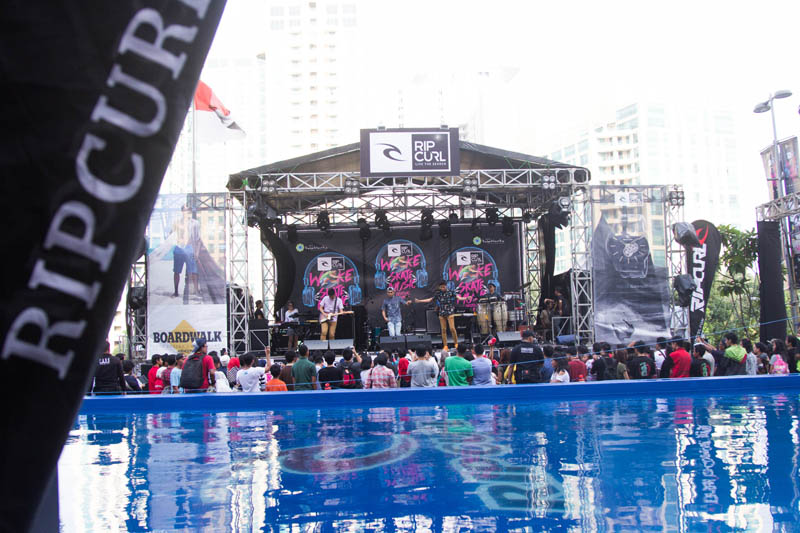 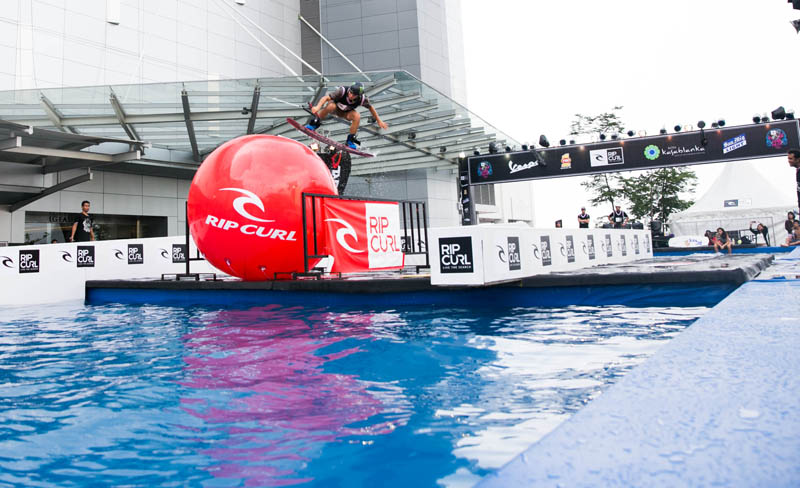 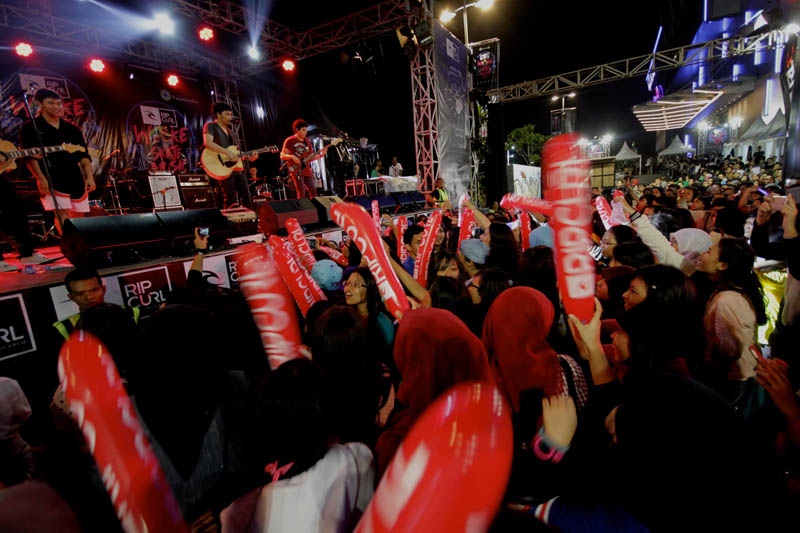 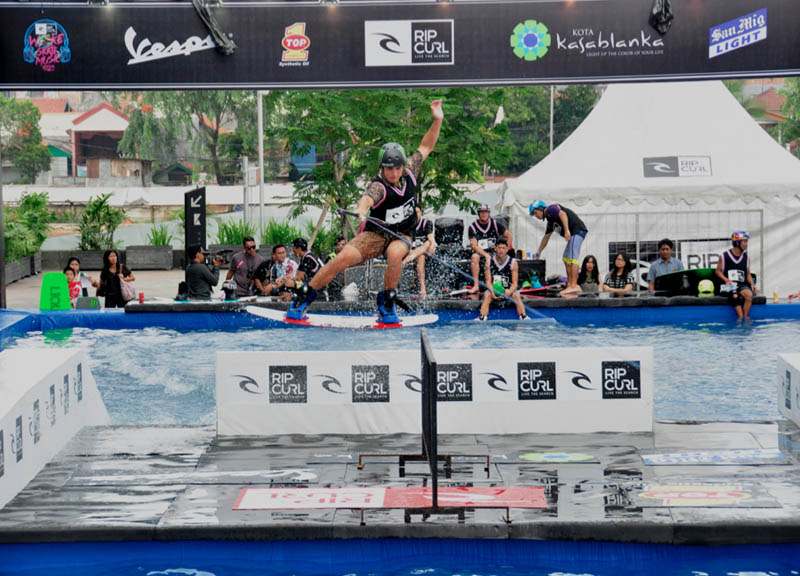 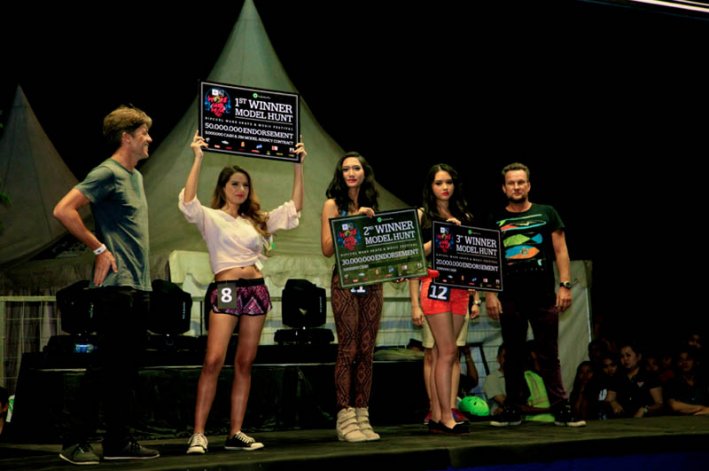 Shoppers at Kota Kasablanka Mall in South Jakarta were treated to an incredible show of Extreme Sports, Music and Fashion over 2 days in what was one of the best ever Live performances seen in the heart of Jakarta putting smiles on the faces of thousands of fans.

Wakeboard World Champion Daniel Grant (Thailand) along with a group of international riders including Indonesia’s best talents, blasted massive tricks across rails and obstacles in the 40 meter purpose-built pool pulled by a winch. Highlights of Wakeboarding included 2 VESPA Motorbikes and one giant beach ball being jumped by Daniel Grant.

Grant commented: "I’ve Winched a lot of pools similar to this size but this set-up Rip Curl has created is defiantly the most challenging because we have to jump over the 5-meter gap with limited run-up. Its unreal to be able to bring my bag of tricks to Jakarta and introduce the sport of Wakeboarding to huge crowds like this, its not often people get to be so close to the action."

After an epic weekend of the best action and a tough battle with all the riders wowing a huge crowd at Kota Kasablanka Mall, judges decided the eventual winner was Daniel Grant for all 3 divisions proving why he is current World Cable Park Champion!  Alongside Wakeboarding there was also a Skateboarding competition run by the Federation of Skateboarding Indonesia, which pulled equally huge crowds across the weekend.  Skaters from all over Indonesia session the park on Saturday morning before Pre-qualification's started in the late afternoon.

After two days of competition and all kinds of amazing tricks, the Jury decided the winner of the ledge spot competition was Rino Herman from Padang. For the pyramid spot competition it was Satria Vije from Palembang won took the honours, as for the wall spot competition Deni Lizam from Aceh turned up the heat to take the final top spot.  James Hendy Rip Curl SE Asia Marketing manager said : "We’ve been running Wakeboarding and Music Events like this in Bangkok for the last 3 years now with great success and been wanting to run one similar in Jakarta for quite some time. Thanks to Mall Kotakasablanka and our Sponsors, were stoked to finally get the opportunity to bring this unique event combining Wake, Skate Music and Fashion to Jakarta, giving people in two of SE Asia’s largest cities the chance to meet the Athletes and be a part of the show."

Rip Curl also turned up the heat during the event with an amazing Fashion Show featuring 14 finalists for the Rip Curl Model Hunt – Managed by JIM Model Agency. Girls from Jakarta, Bandung Surabaya took to the stage to be in the running to win a 1-year contract to be the next Ambassador for Rip Curl. All the model's strutted there stuff down the pool-side catwalk in Rip Curl's latest collection’s which is designed with an emphasis on street-wear but also keeps within the brand's values of beach and surf lifestyle. Using a “Made for surfers- by surfers” approach, designing and developing the best quality products, combining creative innovation in response to clients and team riders needs. Furthermore, the event and RIP CURL SE ASIA also provided many fun activities, games, Street art and giveaways during the two days.

Both evenings were topped off in true style when top Indonesian bands ripped into and amazing set list – Starting on Saturday with a first performance by Punk Rockers – The Black Teeth who gave an amazing first Ever live Performance. Then came a set of contrasting sounds from Pop band TheOvertunes - a trio of bothers led by Pop Idol winner Mikah Angelo. The boys were followed to the stage by a team of screaming Girl fans and played a set of 8 songs for over 50 minutes. On Sunday night the first band to hit the stage was RAN, pulling a huge crowd and warming the stage for the evenings second act - Indonesia’s Reggae Ambassador - Ras Muhamad. Closing the event were ROSEMARY – who have a huge Skater Fan base following. The massive crowd crammed into the front of stage turning the area into a massive mosh -pit to finish the event off in true style.

Due to perfect weather, fantastic crowd and great support by Artist, Athletes and Rip Curl Fans the first event ever Rip Curl Wake Skate and Music Festival in the City was a huge success.