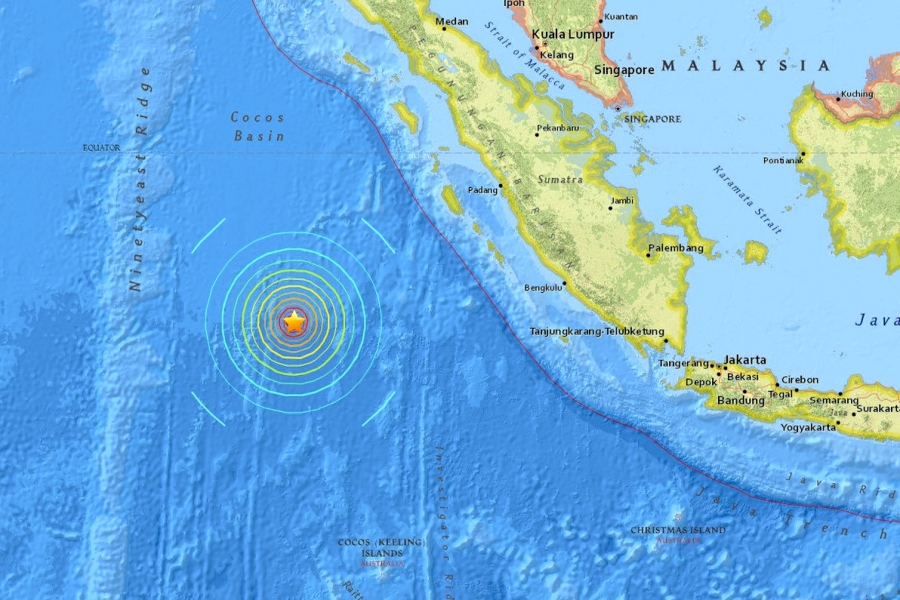 Indonesian authorities lifted a tsunami warning issued after a magnitude 7.8 earthquake struck off the island of Sumatra,....

"Sumatera is a region where an undersea tremor killed hundreds of thousands in 2004.
The tremor hit 500 miles (804 kilometers) southwest of Padang in Sumatra at a depth of about 15 miles, the U.S. Geological Survey said. Indonesia’s national disaster mitigation agency initially reported the quake at a magnitude of 8.3.

Tremors were noted in tall buildings in the capital Jakarta on Java island, though residents in West Sumatran towns said the quake was lightly felt. People on the coast of Sumatra should move inland, Andi Eka Sakya, an official with Indonesia’s meteorology office, said earlier on tvOne.

Authorities declared a state of emergency for Sumatra to optimize assistance, Heronimus Guru, deputy operations director at the national search and rescue agency known as Basarnas, said via text message. Footage aired on the TVRI television channel showed Padang city in darkness as electricity was cut off. People were seen fleeing toward the east of city with roads congested.

President Joko Widodo was on the second day of a visit to Sumatra and is safe, according to Bey Machmudin, head of the palace press bureau. He is scheduled to return to Jakarta on Thursday.

"There is no info on casualties or damages yet," Sutopo Purwo Nugroho, a spokesman at the national disaster mitigation agency, said via text message. "The tsunami warning is based on modeling, while tsunami buoys in Indonesian waters haven’t reported any existence of a tsunami. Many buoys are broken and not functioning, so we don’t know whether the potential for a tsunami in the waters is true or not."
Waves unleashed in 2004 by a 9.1-magnitude undersea earthquake off the Sumatran coast caused the deadliest natural disaster this century, taking more than 220,000 lives and leaving more than 1.5 million homeless. Waves as high as 15 meters (50 feet) crashed into towns and shorelines across more than a dozen countries, destroying people’s livelihoods and possessions.

*Indonesia’s 18,000 islands sit along the Pacific’s “ring of fire” zone of active volcanoes and tectonic faults.

Thailand’s National Disaster Warning Center canceled its tsunami warning to coastal provinces as it hadn’t detected any impact. Sri Lanka, badly hit by the 2004 tsunami, also said Wednesday’s quake did not pose a threat to it."