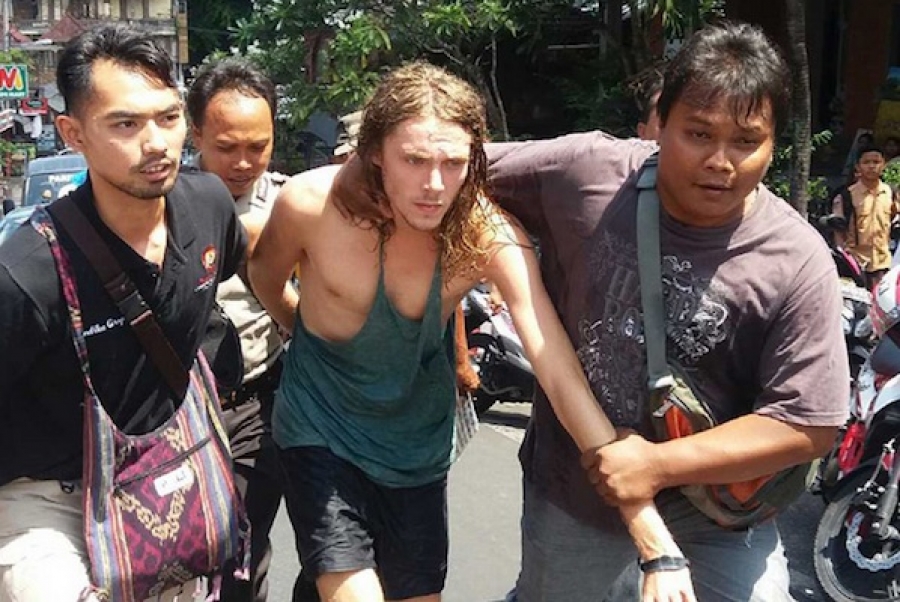 Millions of tourists arrive every year to Bali, from both, domestic and abroad. Because of that, a large number of souvenir shops sell various items of interest to be used as souvenirs or personal property.  The Indonesian people, in general, assume that people called with the term "Foreigners" have a lot of money. But that's not truth.... An American citizen of 22 years of age, was caught stealing pants in local stores. The American is now languishing at the Office Police Central Ubud, Bali .

According to the report an employee of the store, the American entered the store and tried his opportunity knowing the employees were very busy. Then he put the pants into a bag he brought. The  store manager "smelled" the bad action of the tourist,  so he asked the foreigners to open his bag. Busted...

Surrounded by a crowd of spectators, Noah Pardue tried to make an escape running down Monkey Forest Road and dashing in and out of several restaurants.

By this stage, Police from the local precinct had joined the chase aided by photos of the man recorded on hand phones. Pardue was eventually discovered hiding in a water tower, wet from head to toe.

As police escorted the American through the busy streets of Ubud, angry bystanders began to scream demands for the administration of simple street justice. Fearing for the man’s safety, police quickly evacuated him to the relative safety of a cell at the Ubud Police Precinct.

Police have sinced moved the American to the Gianyar Police headquarters for further interviews as they prepare a criminal case to be handed to prosecutors.

Untill know the police didn't find  what was the motivation of the American Tourist to stole in the store. Is it because he had no money, or was he indeed contracted the disease cleptomania.