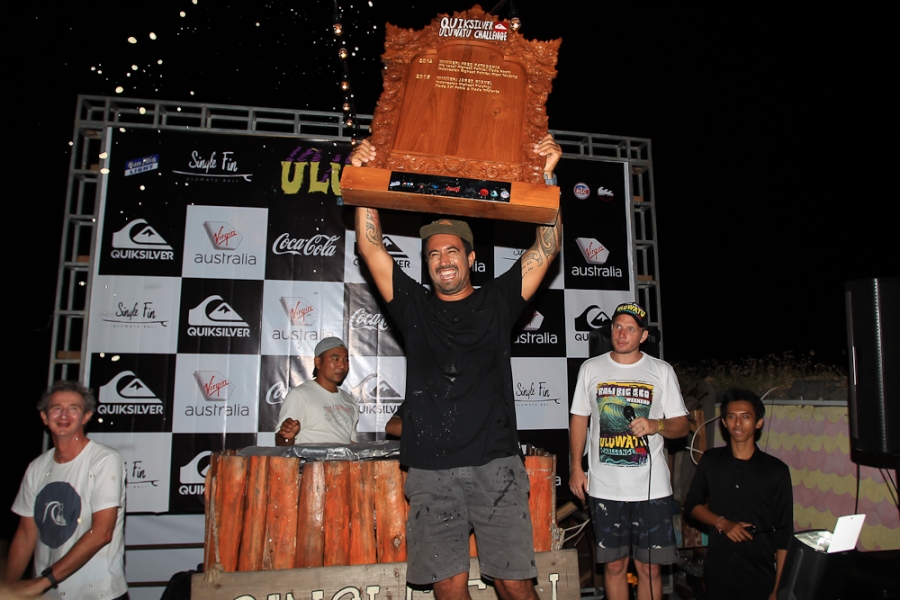 Over Dede Suryana in an Epic Day of Surfing with Australian and Balinese Legends at the 3rd Annual Big Bali Eco Weekend Uluwatu Challenge  on July 31st.

It all came down to the final minute of the last heat of the day at the 3rd annual Big Bali Eco Weekend Uluwatu Challenge Fundraiser yesterday afternoon.

Though there was no prize money at stake, being a fundraising event for the Quiksilver and Coca-Cola managed Bali Beach Clean Up program, the winner’s name would be added to the perpetual trophy for bragging rights.  The tension was palpable in the Edge bar as the judges analyzed, whispered, and finally punched in their scores…finally the MC screamed out, “Tai Graham wins the Uluwatu Challenge!”  Unfortunately Dede Suryana’s score fell just short of the required score by 0.30 of a point. 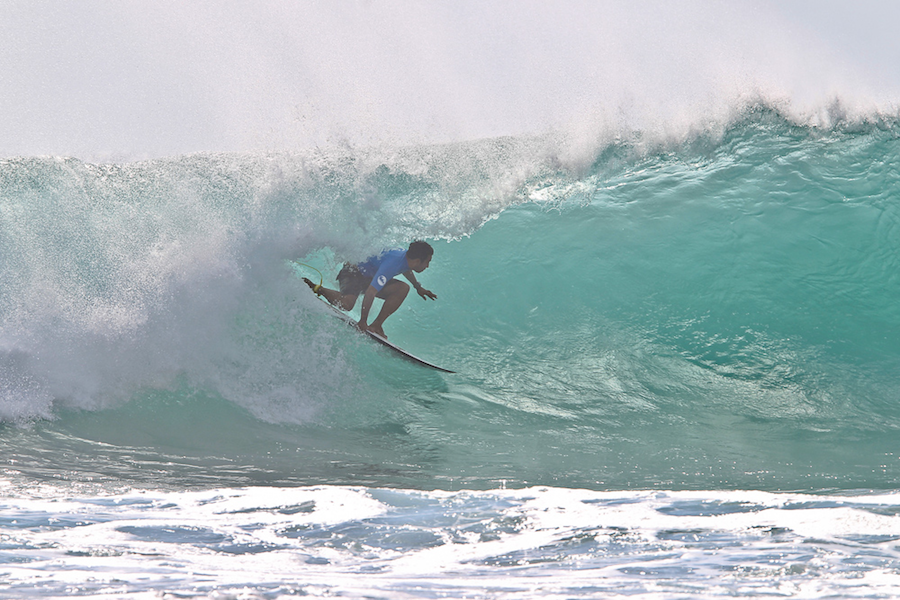 *Thai Graham barreling  in inside corner

“It’s an absolute honor to beat one of Asia’s best surfers in Dede Suryana, he’s one of the most stylish and most technically perfect surfers, said Graham in the beach marshal’s area while greeting Suryana.  “Getting one up on him wasn’t easy, so I’m very honored to beat Dede….. He’s the man! I really thought he got the score there at the end…it was down to the last wave of the last heat in the last 10 seconds.”

“I’m stoked to get my name on the trophy, and to surf with all these legends and punters here at Uluwatu…what could be better than spending a Sunday here…and a Sunday night at Single Fin?  Thanks to the Uluwatu Boardriders for sharing their waves with us today, and to Coca-Cola, Quiksilver, the ASC, and to everybody that joined in and supported this event,” he added. 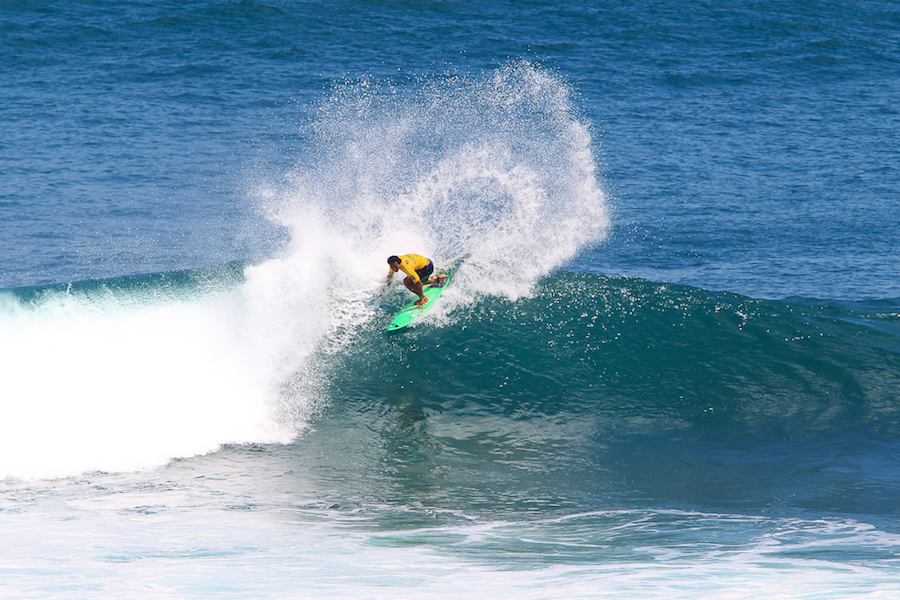 Suryana was all smiles when asked how he felt about his runner up spot.  “I thought I had it on that last wave,” he explained.  “I took off and it started growing, so I pulled in and it opened up to be so square that I had my arms outstretched over my head in the barrel, then it spat me out, another barrel section popped up so I pulled in and pumped to get more speed, and just saw a small door and snuck out the end…I was sure I had it so I gave it a claim, hahaha.  I just needed a 9.09 and received an 8.83…but it was lots of fun surfing with the Aussie legends like Tom Carroll, Mark Richards, Peter McCabe, and guys like Switra that I haven’t surfed with for a while.  Thanks everybody for coming out and congratulations to Tai… I had a great time and it was all for a good cause!”

This year’s Quiksilver Uluwatu Challenge was in the Eddie Aikau 6-person heat format, where each surfer competed in two heats with their 2 best scores  being counted.

For a Rp 2 million ($150 USD) entry fee, 44 lucky surfers got to paddle out and compete with Quiksilver legends including Mark Richards, Matt Hoy, Tom Carroll, Simon Anderson and Peter McCabe, and joining them were Bali legends that included, Ketut Menda, Made Lana, Made Switra, and Rizal Tanjung for a total of 54 participants.

Raised funds will go towards the Quiksilver and Coca-Cola beach cleaning program, a program which has been running for 9 years that cleans the 5 key beaches in Bali (Kuta, Seminyak, Legian, Jimbaran and Kedonganan).  With a view to further help out with rubbish control in Uluwatu, Quiksilver and Coca-Cola donated 30 new rubbish bins to the warungs of Uluwatu to make it easier to process their rubbish for collection.

Following the competition, the Single Fin bar was opened up for a sunset party and the awards presentation as the sun set over the Indian Ocean. 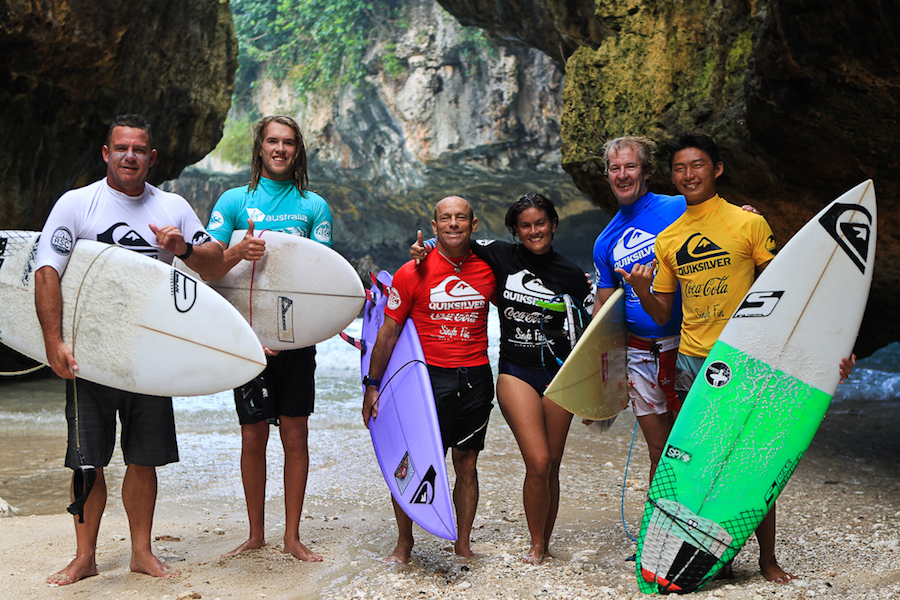 ?The surf legend Tom Carrol on the Center in red lycra, surrounded by other amazing surfers, including Indonesian Gemala Hanafiah.

PT Quiksilver Indonesia CEO, Paul Hutson, was delighted with the turnout and the event, saying, “There is no greater and more iconic surfing destination in the Asian Pacific region than Uluwatu, and I dare say that there’s not an international surfer that’s been to Bali that hasn’t surfed here.  We’re proud to be able to bring Australian legends like Simon Anderson here…he is the inventor of the thruster and actually tested his early thrusters here at Ulu back in the day, so watching him out there still ripping together with Mark Richards, Tom Carroll, Matt Hoy, Peter McCabe and all the Bali crew is really amazing.  The impact that these guys and Uluwatu has had on the surfing world cannot be overstated…its enormous, and so we’re proud to be able to put this event together to keep the memories of the past alive and continue to make memories for all the surfers and surf fans in the Asian Pacific region…..Now that the Uluwatu Challenge 2016 is over, we are excited to start planning our events for next years 10th anniversary of our Beach Clean Up program.”

Bruce Waterfield from Coca-Cola Amatil Indonesia was also very happy with the event and the entire weekend.  “This is the 3rd time we’ve done an event here at Uluwatu, and we’re fully committed to keep it going in partnership with Quiksilver and in conjunction with all our other programs together,” he said.  “As Bali continues to develop the waste won’t stop so going into our 10th year in 2017, we’re still very committed to addressing the problem and creating visibility not only in Bali but around the region with our Big Bali Eco Weekend and our daily beach cleaning activities.”

Regarding the surfing events, Bruce said, “Yesterday’s Padma surf contest and today’s Uluwatu event were fantastic…we had great waves and a great vibe from all competitors.  We really enjoy supporting the growth of the local professional surfing talent, and that’s something that both of our organizations have been doing for decades…there are some very talented surfers here in Indonesia and they’re now getting world wide recognition.  This legends event is epic as it gives everyone a chance to surf side by side with some of the world’s most influential surfers, and that’s something that doesn’t happen often, especially at a location like Uluwatu.

Near the end of the evening while at the Single Fin bar, Quiksilver legend and 2-time World Champion Tom Carroll was asked about his first Uluwatu experience, to which he replied, “In my first Uluwatu experience there were only two little warungs on the hill, and I remember coming out here with my buddies Joe Engel and Peter Burn.  We’d come out here on motorbikes, surf all day, then ride back to Kuta at night.  It was very quiet…and very very different to what we have here tonight!”

When asked about his current experience, he said, “I really enjoy surfing Uluwatu, then and now.  I had a great time at this event today, even though I didn’t catch the waves I wanted…sometimes it’s like that.  But I had a fun lunchtime surf at Secrets, so its all good. I’m very happy to be a part of this each year as I respect and admire the commitment of Quiksilver and Coca-Cola in educating and empowering the local community to do more for themselves, to take care of their environment, as it sends a powerful message and shows great integrity. I’ll look forward to coming back next year!” 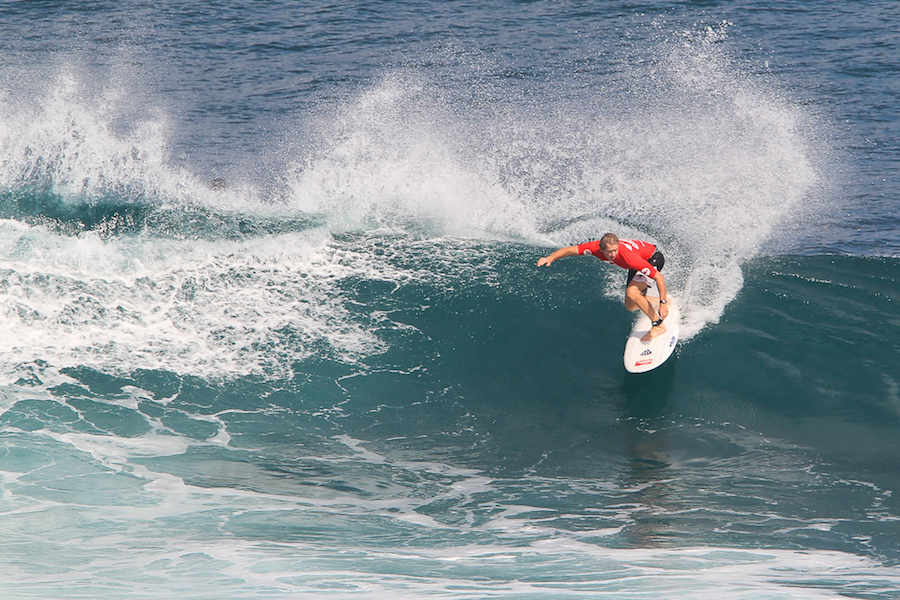 An annual CSR event since 2008, the BBEW is a part of Bali Beach Clean Up CSR program started by Quiksilver and Coca-Cola Amatil Indonesia.  They now have three beach tractors, two Barber surf rakes, two rubbish transport trucks, an educational van, and a 4-wheeler to rescue turtles, in addition to employing some 80 local people to clean up the beaches each day, in addition to establishing and supporting the Kuta Beach Sea Turtle Conservation and providing uniforms and supplies to the Bali Lifeguards.