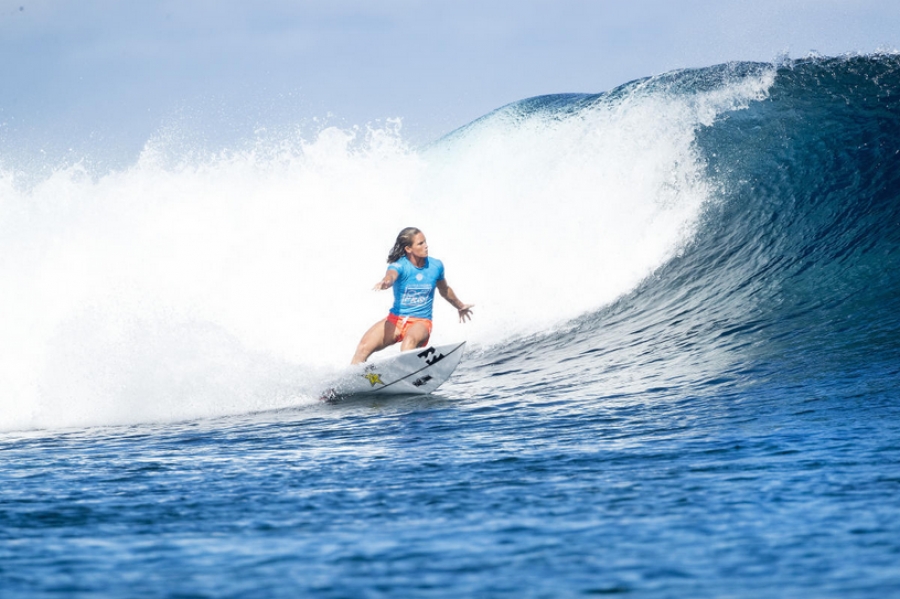 Wednesday was a rough one by Tavarua standards. A frightening forecast forced contest officials to run in the last vestiges of small southerly pulse. While 4-foot Cloudbreak is still fun as hell to surf, it's not what we typically expect from Fiji. Nevertheless, the game faces were on this morning as a crucial Round Four kicked things off.
Stephanie Gilmore was the first big casualty in the smaller conditions. She had a huge wall to climb facing Tatiana Weston-Webb at Cloudbreak. The Kauai local was, after all, one of the first to arrive in Fiji, and has been tearing it up for over a week, so her intimidation factor has been in full effect. Weston-Webb won the heat handily, giving Tyler Wright sole possession of the Jeep Leader Jersey as a result.
One heat earlier, Wright got some long-overdue payback on Bethany Hamilton. Hamilton, you'll recall, removed Wright from this event last year, then made her take a tough trip through Round Two this time around, after edging her again on opening day. There's no whiff of a real rivalry -- the two Rip Curl teammates couldn't worship each other more -- and they bring out the best in each other. 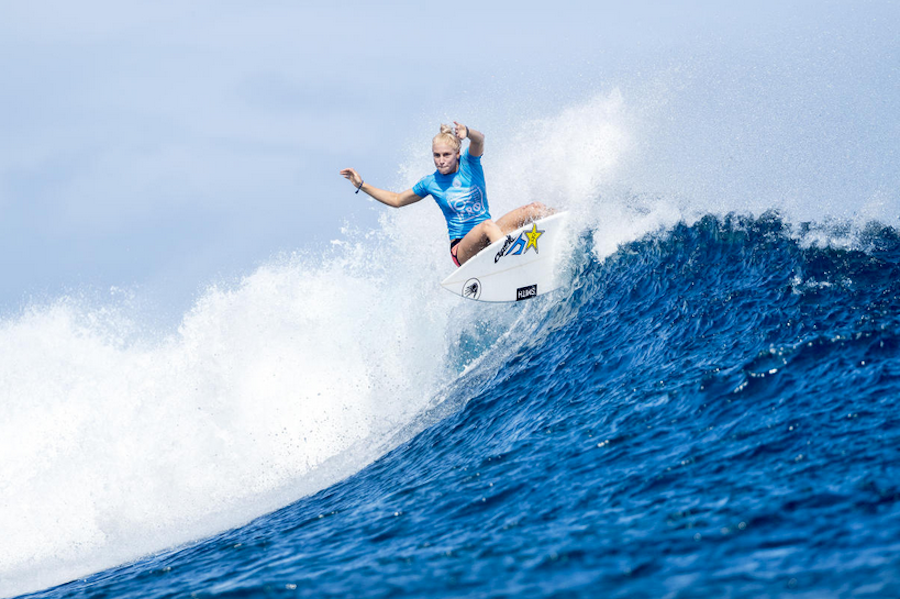 The biggest casualty of the Quarterfinals was Carissa Moore, again. Just when it looked like Moore would be blasting through her season barrier, she had the misfortune of running into the Tatiana train. Their heat was a rough, low-scoring affair, that came down to a chess match on the reef. Tatiana's time in the water helped her see four moves ahead, and it paid off. Carissa is headed home with another 5th place finish.
There were plenty of other scrappy heats, too. Courtney scratched past defending event champion Johanne Defay. Sage Erickson sat in vain for waves that never came while Tyler Wright scrambled some edible Cloudbreak eggs for a win, and Sally Fitzgibbons stormed past Nikki Van Dijk.

In the Semifinals, it looked like Tyler was on her way to padding her ratings lead -- at first. Courtney sat down the reef while Tyler repeated her Quarterfinal recipe. But in the waning moments of the heat, Courtney decided to engage, and she dealt Wright a pretty big blow by coming back to win. Not only did Courtney gain ground on the Jeep Leader, she also put Wright's lead in jeopardy, because Sally Fitzgibbons was in the very next heat.
Fitzgibbons also came out firing, surfing crisp and clean in the tricky stuff. But Tatiana found a good chunk of open face, and took total advantage of it on her forehand. Her mix of big arcs and vicious snaps helped give her a big comeback win. Had Sally won, she and Tyler would be at least sharing the Jeep Leader's yellow jersey.

Tatiana Weston-Webb will be making her first Final appearance of the year at the Outerknown Fiji Women's Pro. Here's how she did it.
The Final between Conlogue and Weston-Webb was put on hold at the last minute due to the dwindling conditions, which wasn't the easiest call for commissioner Jessi Miley-Dyer to make. She's rolling the dice...but at this stage, there's a more upside potential than down. The next call is Thursday morning at 7:30 a.m. in Fiji.