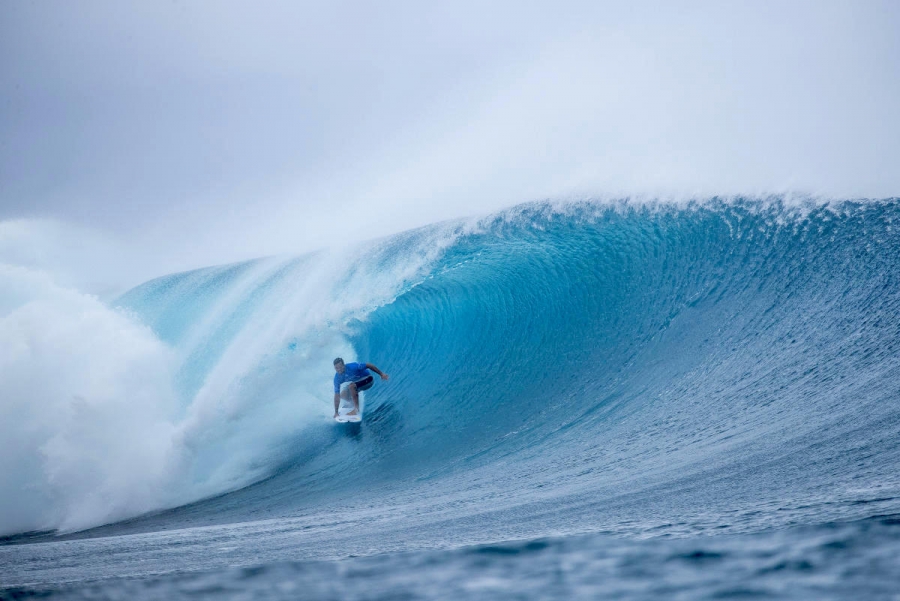 Slater, learned that Cloudbreak can still play hard-to-get, even after 27 years of happy marriage. He spent half the heat underwater after getting flogged by set waves out the back.

"There are actually four different swells working out there right now," said Kelly Slater before his opening round heat at the Outerknown Fiji Pro. "I haven't been out there yet -- I was testing boards at Restaurants -- but I think I know what's happening out there."

Slater, who was up against Mick Fanning and Bede Durbidge in the last heat of Round One, stopped mid-sentence at the sight of Michel Bourez traveling through a lengthy backhand tube. After a long day of watching a bunch of Cloudbreak thumpings, things were finally starting to look more lined up. "But then again, there's been times when I thought I knew what was going on out there and it was actually nothing like it. That's Cloudbreak."
In fact, Bourez, Ace Buchan, and Miguel Pupo were actually enjoying the best heat of the day just as Slater was making his assessment. It was first time all day that all three surfers had cracked double digits. Until then, heat winners were taking the bulk of the spoils, which weren't much to speak of.

Wins weren't coming easy for anyone, save possibly for the frontrunners on the Jeep Leaderboard. John John Florence arrived in Fiji at World No. 1, with 24,750 points. Sitting just 350 points behind him, though, are equal-No. 2s Jordy Smith, Adriano de Souza and Owen Wright -- and all four of them did a solid job of solving the Cloudbreak riddle Sunday.

Wright won his match against Leonardo Fioravanti and Ezekiel Lau on the strength of a solid 8.5 score. It's his first time competing at Cloudbreak since his win in 2015, and he's looking as lethal as ever.
De Souza had to grind out a win against Kanoa Igarashi and Bino Lopes as conditions deteriorated, but for some reason it never seemed in doubt that he would take this one. De Souza knew the tubes weren't working, so he leaned into some high-speed arcs with dogged determination and purpose, and was rewarded with a win.

Jordy Smith took the turn-route to victory as well, throwing his big board and body around with vigor in the powerful stuff. Meanwhile, if Yago Dora and Jack Freestone looked lost out there, it's because they were.
Jeep Leader John John Florence was able to blend a mix of tubes and turns together to earn a crucial win in his heat over local wildcard Tevita Gukilau, who earned the highest score of the heat, and Josh Kerr, who played the role of odd man out in that one.

And while the frontrunners didn't give an inch, neither did No. 5-ranked Matt Wilkinson, or defending champion Gabriel Medina. Both showed why there were finalists here last year, looking dialed with their equipment and in rhythm with the moody ocean that Slater mentioned.
Slater, by the way, learned that Cloudbreak can still play hard-to-get, even after 27 years of happy marriage. He spent half the heat underwater after getting flogged by set waves out the back. Meanwhile, Fanning and Durbidge picked off some workable walls on the inside corner. Slater made a valiant attempt at a big barrel in the last half, but Cloudbreak was in no mood today. He was brutally brushed off his board, and finished last.
Slater will be trying to turn things around in Round Two Monday, when he takes on rookie Ethan Ewing in Heat 5. The death round is expected to start at 7:30 a.m. Fiji time.