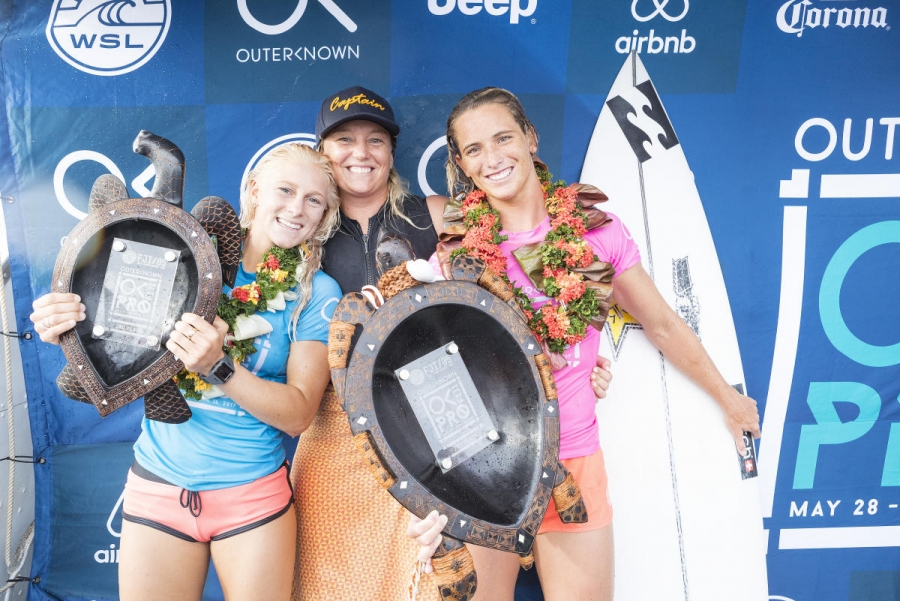 This weekend, in movie theaters around the world, women have been rallying around the big-screen revival of Wonder Woman. Recounting the battles of a fictional superhero who was created long before the words "girl power" became a phrase, the film has nothing to do with surfing.

But today, in a reef pass near a tiny speck of an island in the South Pacific, surfing had everything to do with the film, with none of the trappings of a glossy blockbuster. In contrast, as Courtney Conlogue won the Outerknown Fiji Women's Pro, after a difficult concluding heat against Tatiana Weston-Webb, the women's success here was not only far from Hollywood, but a far cry from that town's shiny version of what heroism looks like. Instead of an epic clash after a picture-perfect contest in paradise, Conlogue and Weston-Webb scrapped through a low-scoring Final, after a week in which winning heats was more a matter of making the most of tricky conditions than making it through jaw-dropping tubes.

Each woman, instead, found success the old-fashioned way: hard work, determination, and taking more than a few waves on the head. Both of them have something to prove: Conlogue, that she ditch her bridesmaid's bouquet and win a World Title. Weston-Webb, that she can match the skill possessed by the best of the best. In their quests to conquer their respective demons, both got to Tavarua days before anyone else from the Top 17. That early arrival allowed each of them to catch Cloudbreak in its more perfect and powerful form, and they did laps at the renowned reef break before the contest even got started.

During the contest, their brands of grit, courage and doggedness (not to mention mega-talent) were the death knells for some of the Tour's titans, including all of the previous event winners. Along Conlogue's road to triumph, she took down World No. 1 and reigning World Champion Tyler Wright, as well as the 2016 Fiji Pro winner, Johanne Defay. Weston-Webb, for her part, took care of the other heavyweights. Two-time event winner Sally Fitzgibbons, as well as 6x World Champ Stephanie Gilmore and 3x World Champ Carissa Moore were among her victims.
As fans who watched Sunday morning can attest, Conlogue and Weston-Webb's steely approaches to competition carried them to the bitter end, literally -- two days beyond the official closing date for the women's contest. Four days ago, as the women's second Semifinal ticked down, WSL Deputy Commissioner Jessi Miley-Dyer decided to take a leap, and announced that there would be no women's Final on Thursday.

As it turned out, there wouldn't be one on Friday, or Saturday, either. Instead, she, Commissioner Kieren Perrow and the rest of the contest organizers, decided to wait until some real waves returned -- Sunday morning -- and run the Final ahead of the first heat of the men's event. When the action finally got going this morning, things didn't get much easier; the high score of the Final belonged to Conlogue, at a measly 4.07. But she and Weston-Webb had survived, in surfing's relative terms of tanning, kava-drinking and keeping one's mental game sharp on a small island as the days go by.
Heroism, in this case, didn't look lofty. But that is exactly why their battle mattered. The Final at the 2017 Outerknown Fiji Women's Pro was the result of a decisive risk, work behind the scenes and the very unsexy act of simply slogging it out. But none of that diminishes what everyone gained here. Conlogue's win bumped her up a spot on the Jeep Leaderboard, to World No. 4, and brought her one step closer to an elusive World Title. Weston-Webb's runner-up finish pushed her two full spots up the rankings, to No. 10, and was a much-needed confidence-booster in a season that has seen this once-fearless athlete slip a bit.

And for surfing itself, this morning's Final in Fiji was a statement not only that, yes, the upper echelon of elite women surfers -- a tiny one percent of the one percent -- deserve the best, especially when it's a relatively easy scheduling switch. But beyond this remote, heart-shaped island, Sunday morning also served as a salty reminder that the sometimes-boring job of real-life guts and grit are worth celebrating as much as any heroes on the screen.
Catch Conlogue, Weston-Webb and the rest of the Top 17 compete next at the Vans U.S. Open of Surfing.
Anterior Frontrunners Start Strong at Outerknown Fiji Pro Próxima Heat Draw of the REnextop Asian Surfing Tour (RAST) Stop #1 at Canggu - 8 June