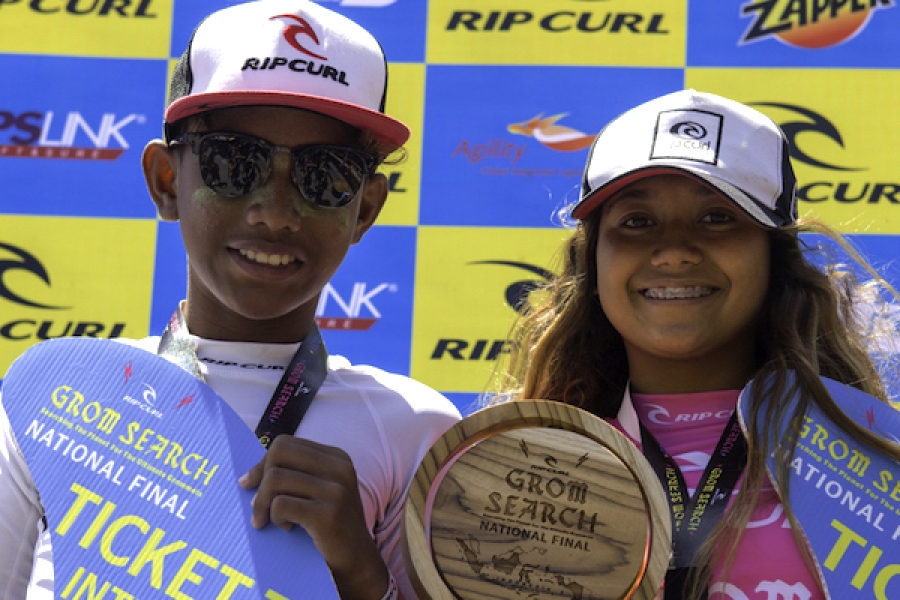 After an epic weekend of big waves and gutsy surfing performances by a crop of Southeast Asia’s best young surfers...

In the Boys Final, Eru saved his best for last and scored an impressive 8.33 – the highest single wave score on the day – and backed it up with a 5.00 on two impressive rides which saw him tear apart the burly 6-foot walls charging through Uluwatu’s Racetrack section. Kuta’s Tenshi Ishii was nipping at Eru’s heels the entire Final. After demolishing his first wave for a solid 6.00, Ishii nearly caught a potentially heat-winning wave in the dying moments of the final, but came up less than a point short with a 6.60 score. Semifinalists Risky Baim (Jimbaran, Bali) and Ryuki Waida (Nusa Dua, Bali) finished in equal third place.
It was the first GromSearch national title for Eru, who got his shot at the prestigious national junior tournament via a wildcard invitation from Rip Curl.
"This is definitely the biggest victory of my life," Eru said after received the trophy on the winner's podium. "It was very tough out there today. The waves were very powerful and challenging to ride, but all the groms were going for it today."
In the Girls Final, Izquierdo put together a dominant performance, scoring a 7.17 for a series of powerful turns on a ride all the way past the cave and down to the big rock. She backed it up with another large wave earning a 5.67. Izquierdo impressed everyone in the heavy conditions and finished with 12.84 over runner-up Gracia Listiana’s 7.80 heat total in the final.

"Big Uluwatu is definitely a wave you have to adjust your surfing to, but it's really fun when you get the right one," said Izquierdo, who was surfing in her backyard and has surfed Outside Corner Uluwatu on larger days. "I was a little nervous before the Final, but I remembered that I surf out here all the time at this size and that helped me settle into a rhythm.”

With their victories, Eru and Izquierdo earned the title of “Southeast Asia’s top groms” and join the elite ranks of past GromSearch National Champions, including current WQS threats Oney Anwar and last year’s champion, Rio Waida.

"I still can't believe I'm going to surf in the GromSearch International Final," said Eru. "Thank you so much to Rip Curl for giving me a wildcard opportunity this weekend to prove what I can do out there. Now I get to go on a trip with the best groms in the world. It still doesn't seem real."
Rip Curl partnered with DHD Surfboards for the 2017 series with a ‘Breakthrough Performer of the Year’ award for the best upcoming, unsponsored rider. This special prize of a custom DHD high performance surfboard was awarded to Risky Baim from Jimbaran, Bali, who took down some big names on his way to placing Equal 3rd overall in this years National Final. Well done Risky!

Best Breakthrough Performer of the Year: