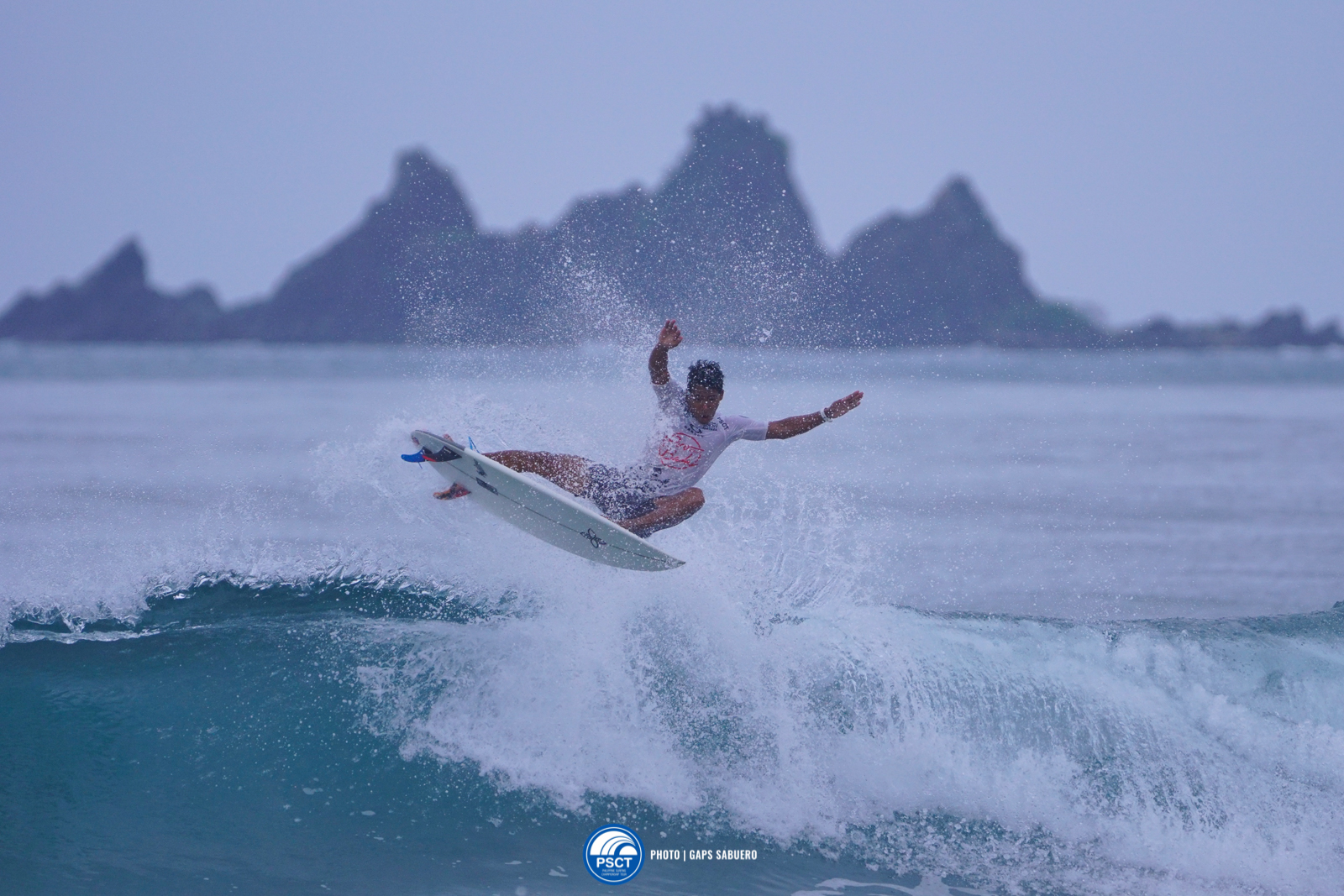 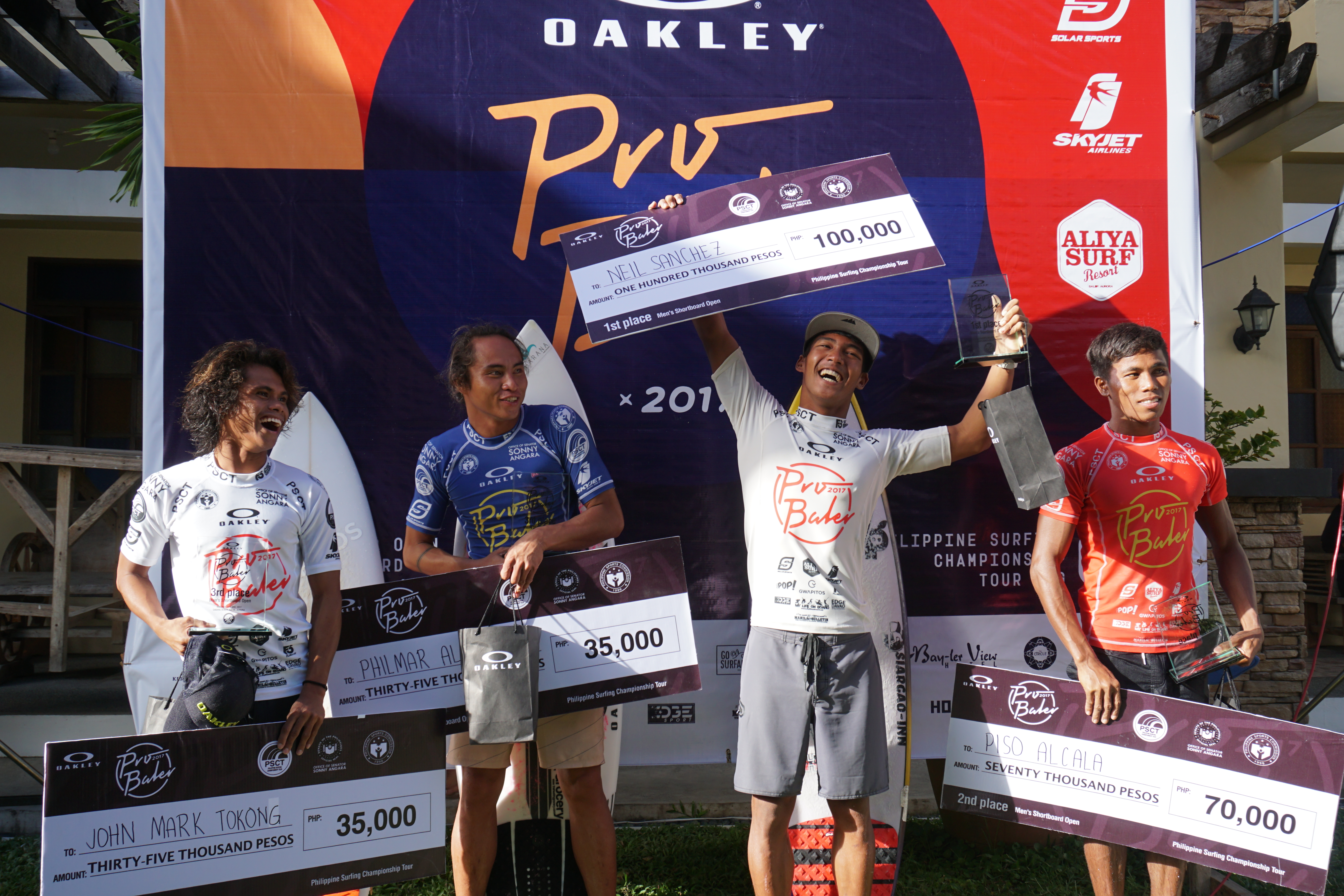 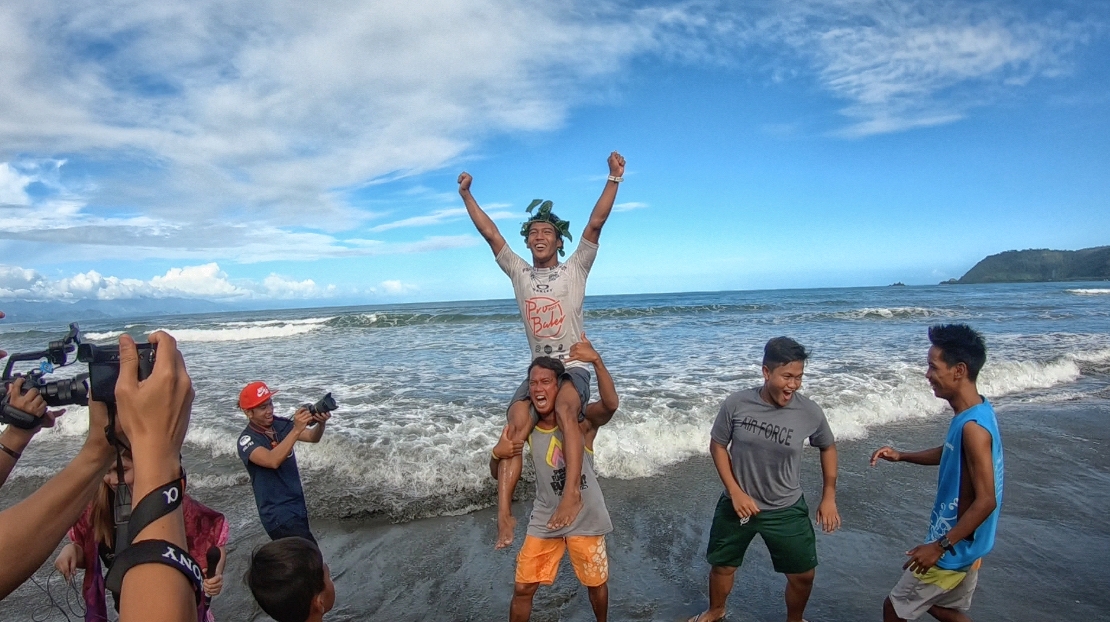 Baler’s very own top surfer, 19-year-old Neil Sanchez, claimed the PHP 100,000 prize purse of the Oakley Pro Baler after an astonishing match-up against one of Siargao’s top surfers, Piso Alcala, in a 30-minute beach break duel yesterday in front of Aliya Surf Resort.

After winning the PSCT-Lanuza leg, Sanchez kept himself in shape by practicing his maneuvers all throughout the week, just like a warrior preparing to defend his homebreak. Sanchez scored a 9.25 during the early minutes of the finals and maintained his dominance in most parts of the heat. Alcala struggled to get his needed combination score to take the lead as Sanchez was on fire.
“I’m really thankful that my homebreak gave me the waves I needed to win this leg. I really can’t explain how I’m feeling right now. Thank you to my sponsors for supporting me and to God for giving me the strength. I’m so happy!” said Sanchez. With a little experience competing in the international surfing stage, Sanchez who is ranked second in the PSCT leaderboard said he was honored to face a seasoned surf athlete like Piso Alcala who, on the other hand, had countless victories in the Philippines and overseas. Alcala won the national and international surfing cups in Siargao way back in 2014. He was also the only Filipino who reached the Quarterfinals in this year’s World Surf League Qualifying Series (WSL QS) 3000 held in Siargao.
Let's take a look back to that epic Semifinal match-up between Sanchez and John Mark Tokong, which was dubbed as a “Monumental Aerial Battle.” The crowd roared as the two aerial specialists exchanged their arsenals of powerful snaps and maneuvers, decorating their scorecards with high scores. During the 3-minute mark, Tokong spotted a clean right-hander and paddled for it. He landed a clean frontside 360 air and took the lead. However, with less than a minute left in the clock, Sanchez pulled off an incredible clutch combination of power snaps and 360 front side air, snatching the victory over Tokong. The spectators said it was the best match-up that they’ve seen in Baler so far.

“I thought I was going to lose when I saw John Mark landed his aerial. I maintained my focus during that last minute. All of a sudden, a wave showed up right in front of me. I gave my very best to get a high score. I said to my self, this is it, I’m going to the finals. I was so happy,” said Sanchez.

Tokong, who kept his head up with his iconic afro, was in all smiles when he went out of the water and embraced Sanchez, exclaiming that it was one of the best heats that he ever experienced. He then walked straight to the crowd to commend them for their support.

“I really thought I already did it since I was able to execute my last aerial and take the lead. I didn’t notice that Neil was able to get a good wave. It was a great heat. I will give my best and try to win on the last leg in La Union,” said Tokong.

Nilbie Blancada from Siargao dominated the Women’s Division defeating La Union’s top female surfer Daisy Valdez and fellow Siargaonons Ana Mae Alipayo and Jolina Uriarte. “We’re glad that the waves are better now compared to yesterday. I was just trying to enjoy surfing with my friends, it was like a normal surf session for us out there,” said Blancada.

During the awarding ceremony, Vice-Governor Rommel T. Angara congratulated Sanchez and all the surfers who joined the Oakley Pro Baler. He also mentioned that he will continue his support for the growth of competitive surfing in the province of Aurora and make an effort to have another PSCT leg in Baler in 2018. “I’m happy that the PSCT has put a lot of effort to professionalize the sport of surfing in the Philippines. I’m also proud of Neil Sanchez for representing Baler in the league. I will make sure that we will support the PSCT Baler leg next year,” said Vice-Governor Angara.