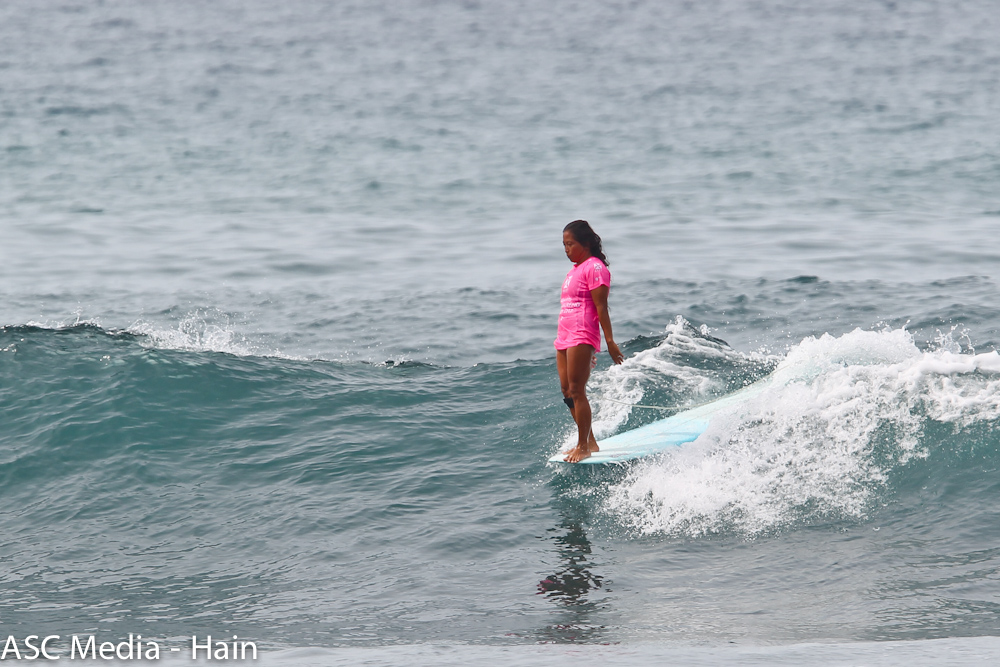 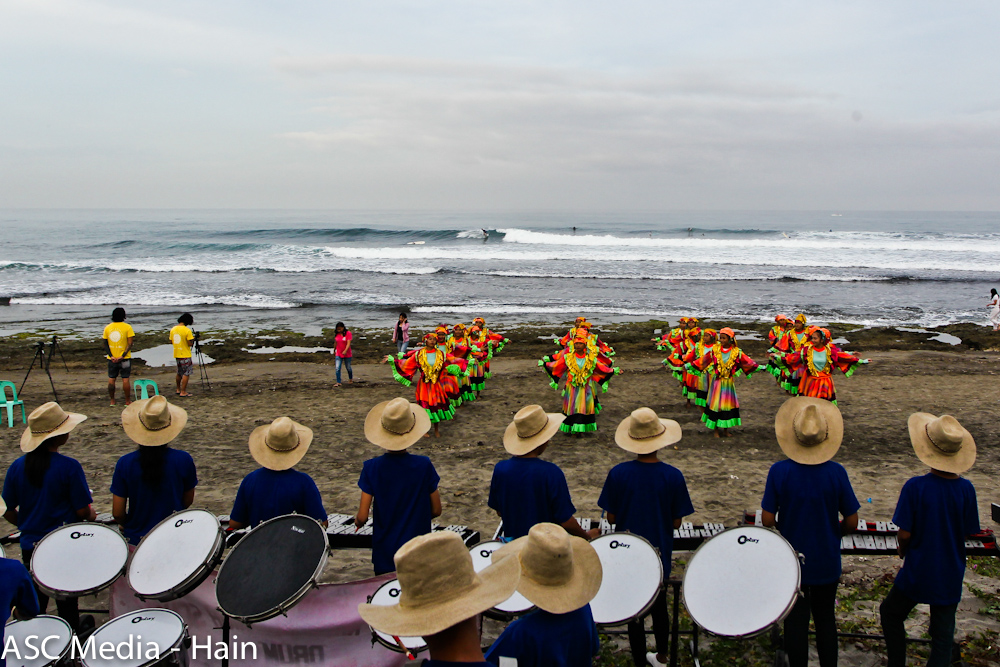 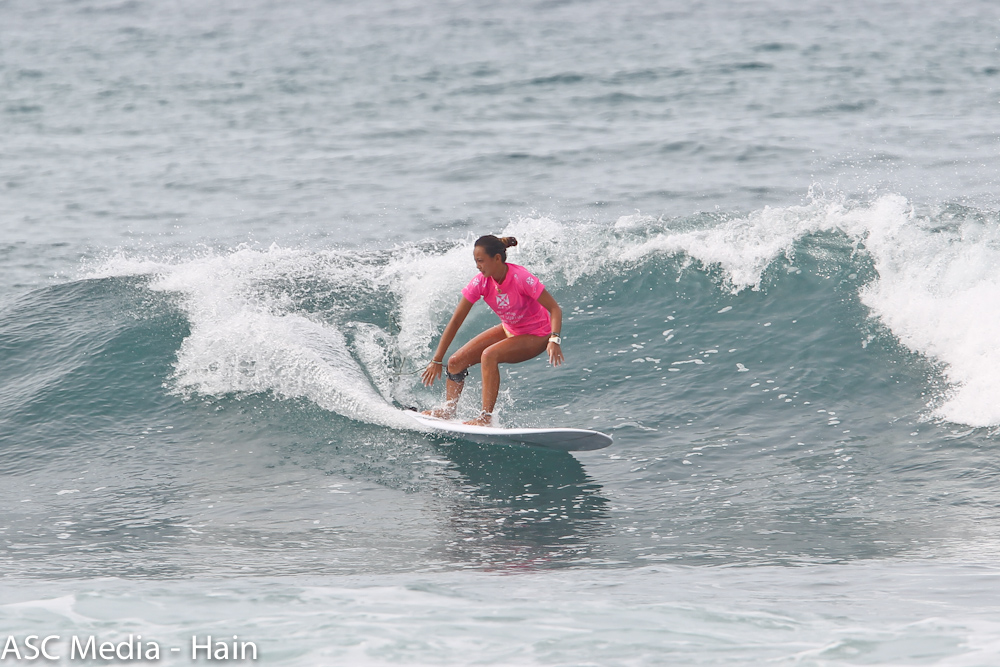 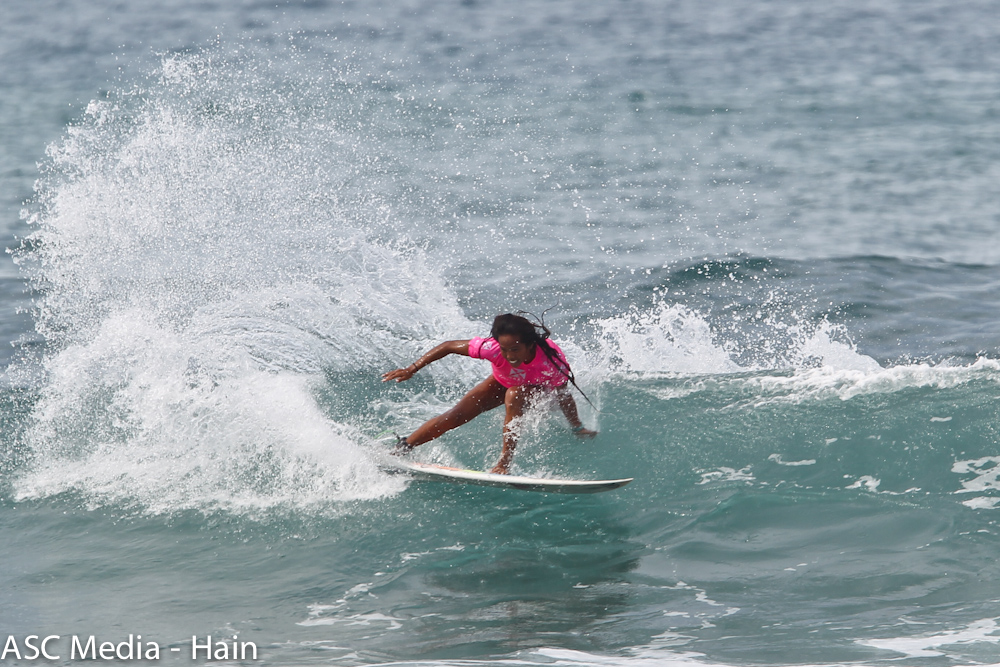 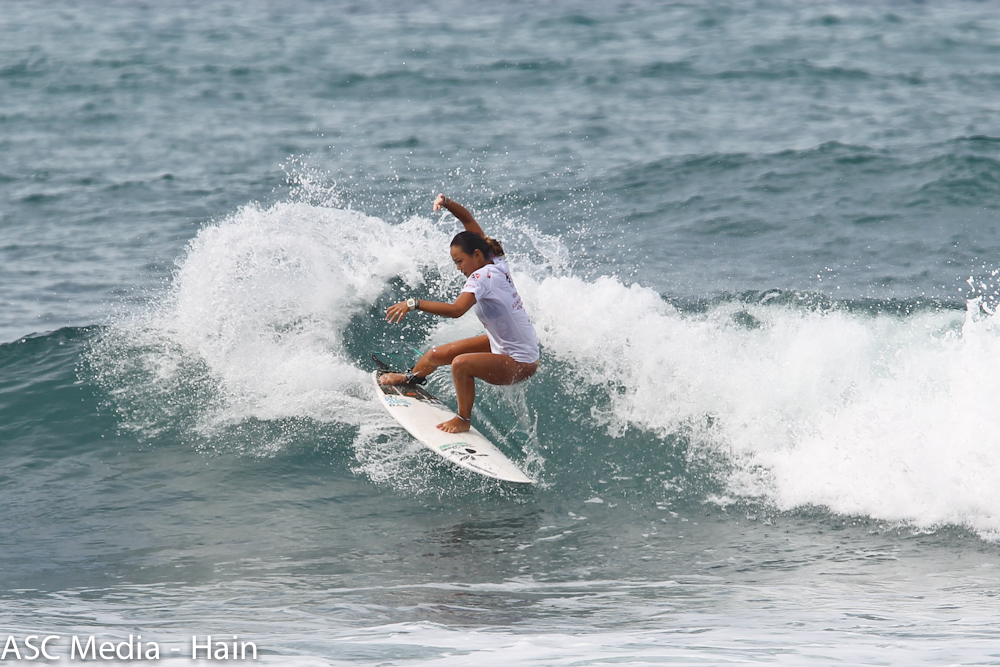 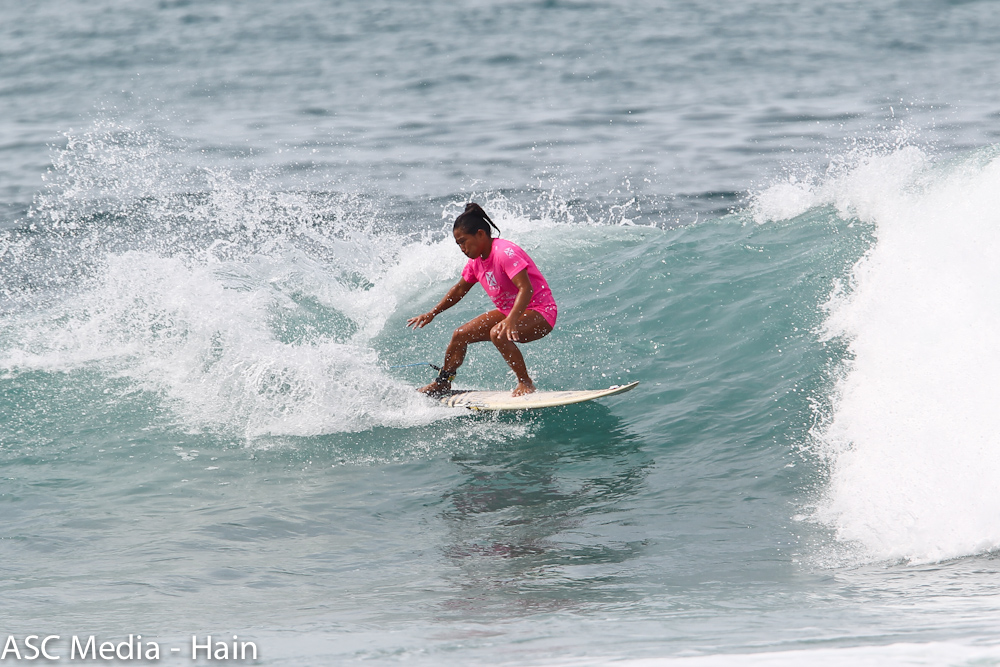 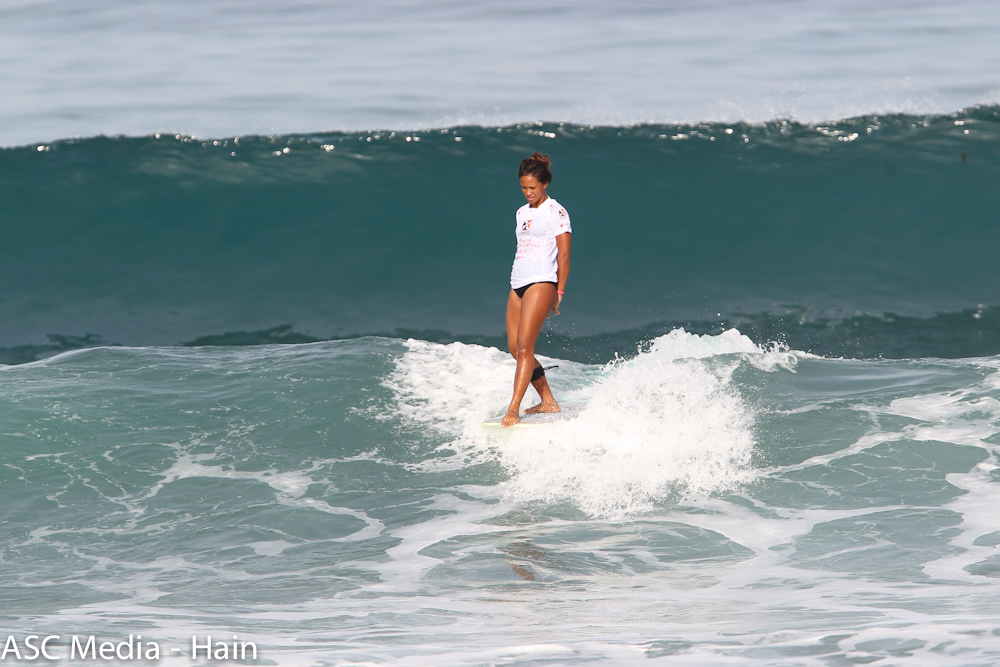 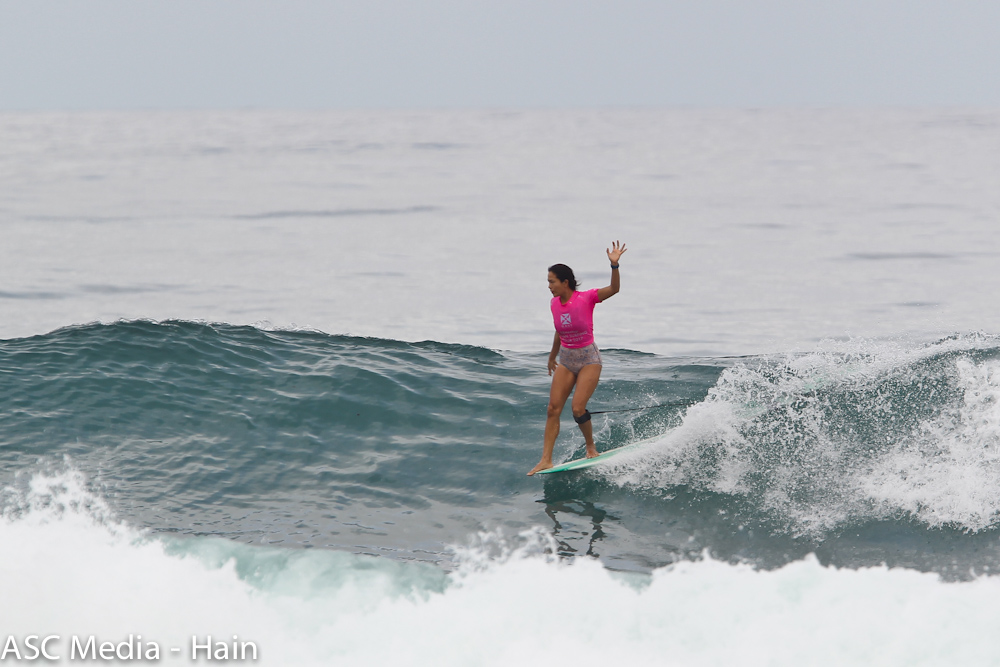 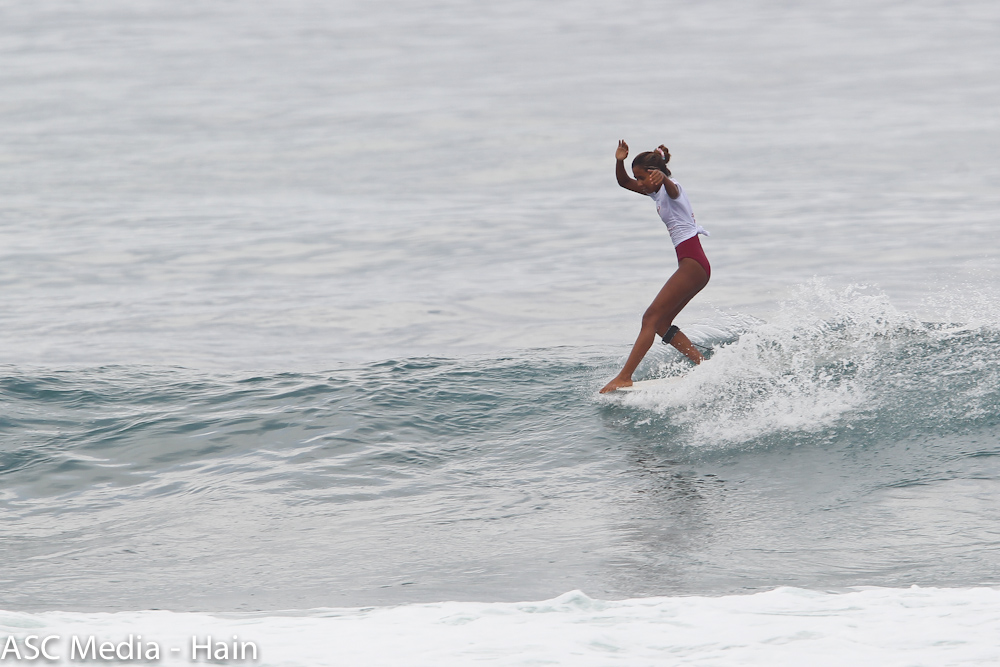 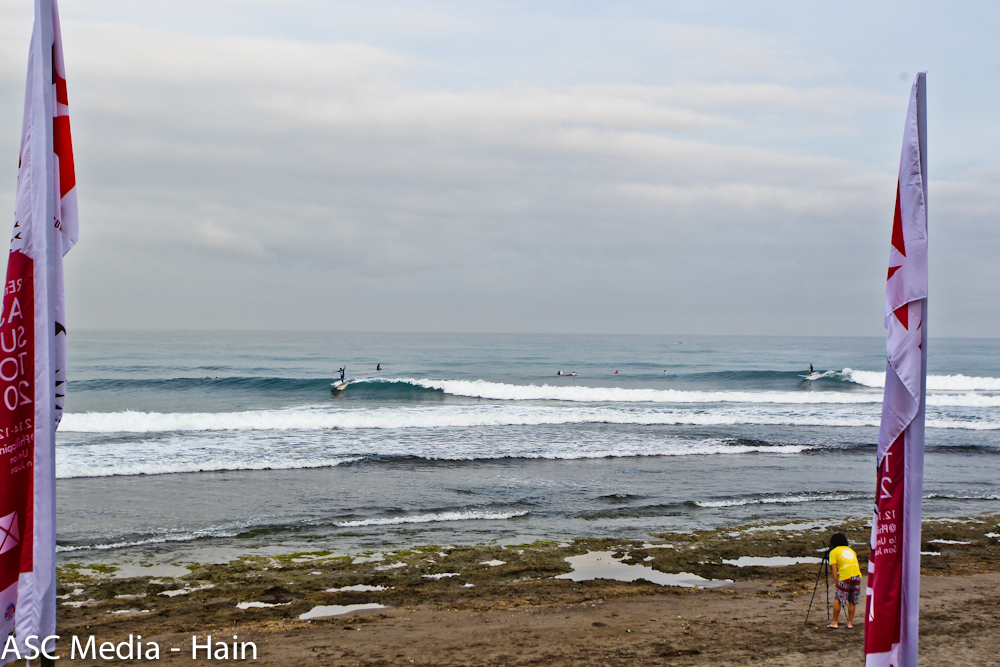 The 3rd and final stop of the 2017 REnextop RAST Tour got off to a great start today in excellent 2-3 foot waves at Mona Lisa Point, with the Women’s Longboard and Shortboard Divisions deciding finalists by the end of the day.

Glassy early morning wave conditions greeted the Women’s Longboard competitors who had come from Korea, Indonesia, Japan, and throughout the Philippines to compete for their share of the $2,500 prize purse on offer and also the chance to end their 2017 season as the inaugural RAST Women’s Longboard Champion.

After reveling in perfect longboarding waves and going head to head in women-on-women competition from the quarterfinals on through the semifinals, it will be La Union local and RAST #2 Women’s Longboard winner Daisy Valdez in tomorrow’s final against Japan’s Kairi Sekaguchi.

Valdez finished runner up in RAST #1 at Canggu in Bali, and won RAST #2 in Japan, so will be crowned the RAST 2017 Women’s Longboard Champion tomorrow even if she places second to Sekaguchi.  Valdez and Sekaguchi surfed in both the Longboard and the Shortboard Divisions today, with Sekaguchi making both finals while Valdez bowed out of the Shortboard Division in the Semifinals.

After losing her Shortboard Division Semifinal, Valdez was still smiling, though admitted to being a bit fatigued.  “Yes, after surfing 6 heats today I’m a bit tired now,” said the mother of two.  “But today the waves were so good, a bit smaller than yesterday but really good.  I think all the girls had fun out there today, and I’m so happy and blessed to have this last stop of the year here at my home break of La Union.  I’m looking forward to tomorrow and hope the waves are really good again for the final,” she added.

In the Women’s Shortboard Division it will be Cloud 9’s (Siargao Island) Nilbie Blancada taking on Japan’s Kairi Sekaguchi in tomorrows final.  Sekaguchi lost in the semifinals in RAST #2 in Shizouka, Japan, and didn’t compete in RAST #1, but with RAST #1 winner Summa Longbottom forced to withdraw due to an injury,  Sekaguchi is now the RAST 2017 Women’s Shortboard Champion.

“ This is my first time here to La Union so this has been a challenge, to surf this wave and compete against all these other girls, so I’m really happy to be in both finals tomorrow,” said Sekaguchi.  “My plan for tomorrow is just to be like I’m in a free surf and have fun, and enjoy the experience.”


Niblie Blancada who hails from Siargao Island, the home of Cloud 9, is hot off a win at Mona Lisa Point where she took the Women’s Division victory and the 2017 championship at last week’s Philippine Surfing Championship’s final stop.

“I’m really excited to be in the final tomorrow with Kairi.  I like surfing against good surfers I was watching her and she surfs really good.  So let’s see what happens tomorrow…I’m really looking forward to it!” said Blancada.

La Union local and Philippine Surfing Championship President Luke Landrigan spent the day on the judging panel, and when asked to evaluate the day’s action and the progress of women’s surfing in the Philippines replied, “There were really fun conditions today, for longboarding and shortboarding, so there was some good surfing going on out there by everyone.  For women’s surfing, we’re seeing more women shortboarders now.  It used to be they only stuck with longboarding, but that is changing now, as we’re seeing on our PSCT tour.”

Tomorrow’s swell forecast looks to be bringing an increase in swell size, so the call time for the Women’s Longboard Final will be for a 7 am start time, followed by the Women’s Shortboard Final.

The Men’s Longboard Division will then be called into action, and run into the afternoon depending upon conditions, and possibly a few heats of the Men’s Shortboard Division.  Saturday will see the conclusion of the event, as a major storm is being predicted to hit on Sunday according to a recent weather forecast.

Currently in the Men’s Shortboard Division it is Rio Waida (IDN/JPN) tied for the lead with Cooga Harada from Japan, so whomever goes further in this event will be crowned the champion, and in the Men’s Longboards it’s Dean Permana (IDN) in the lead over Harley Ingleby (AUS).  But as Ingleby is not in attendance, it is Permana’s event and championship to win
Anterior TOKONG WINS 2017 REEF PRO LA UNION, FIRST PSCT GRAND CHAMPIONS ANNOUNCED Próxima Women’s Longboard and Shortboard Champions Crowned at La Union in the Philippines