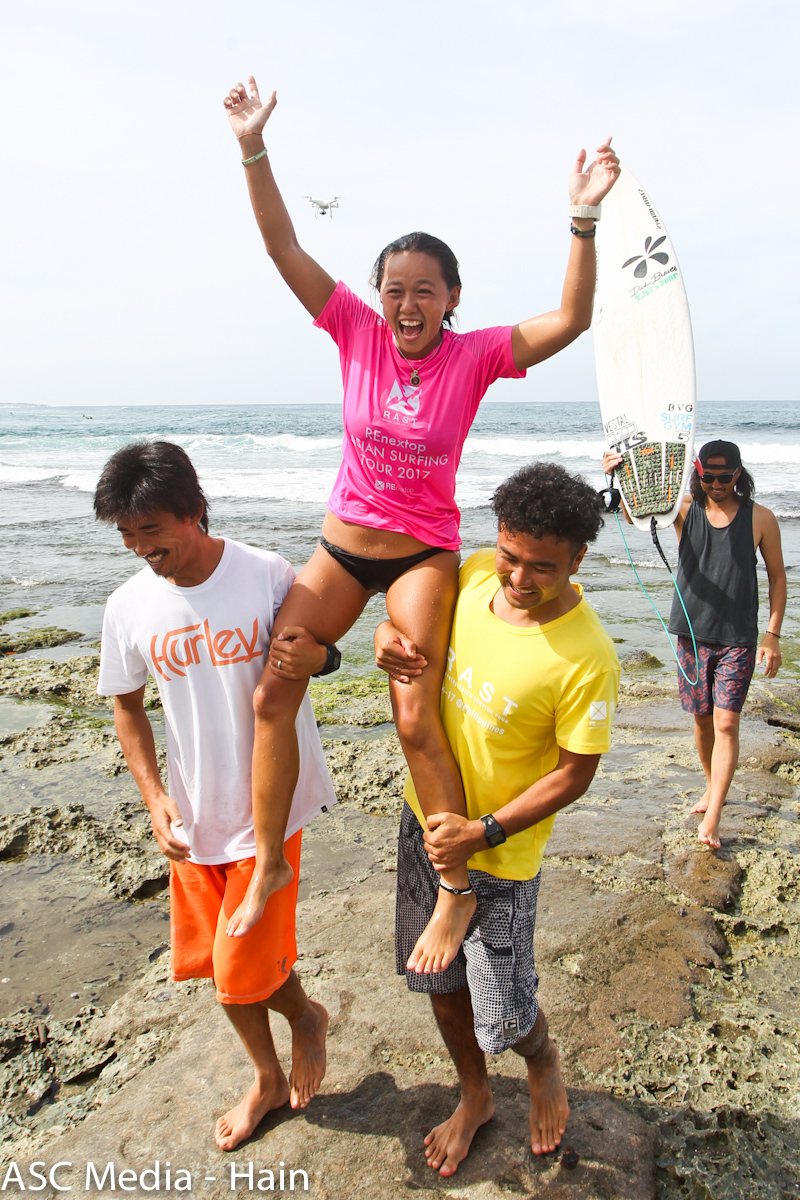 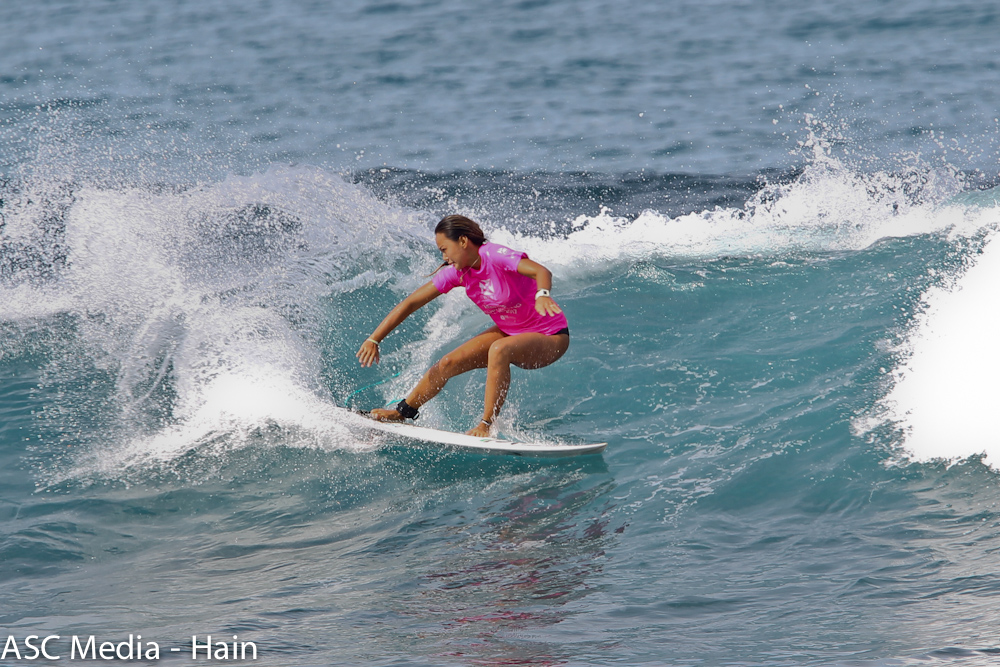 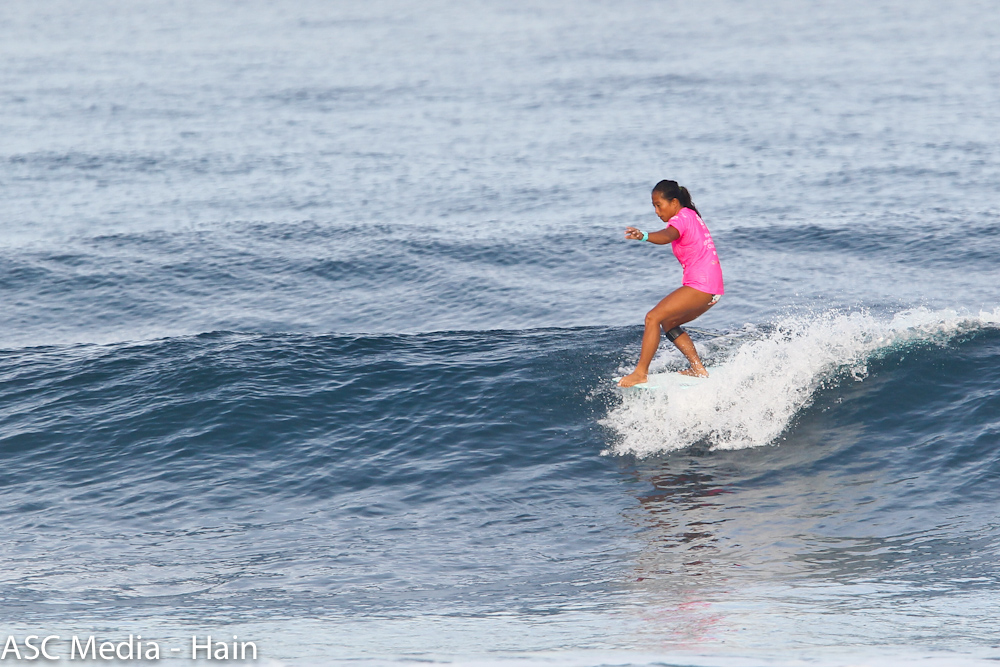 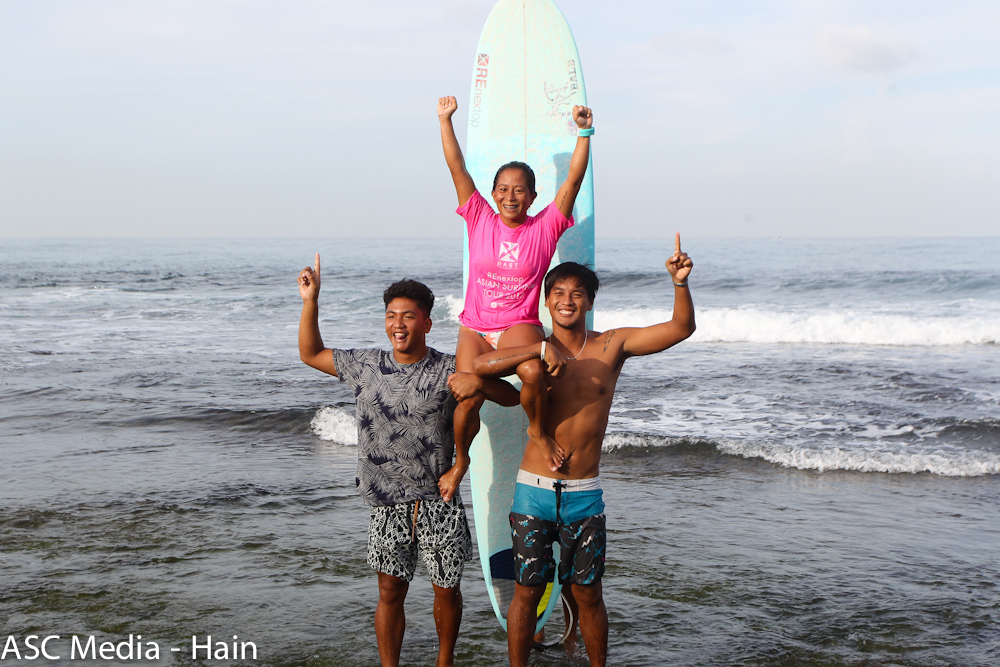 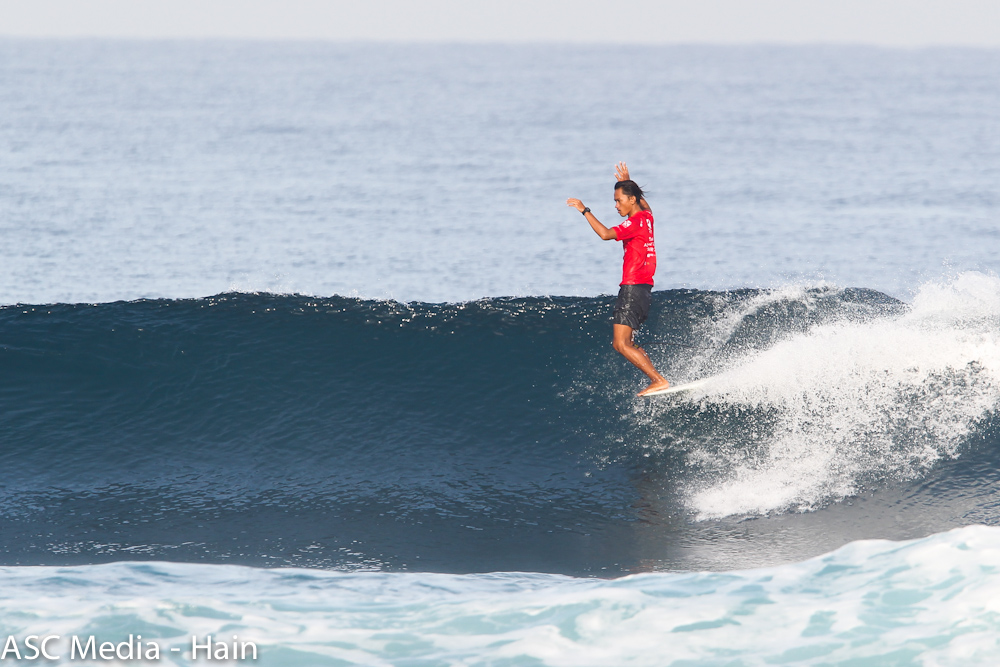 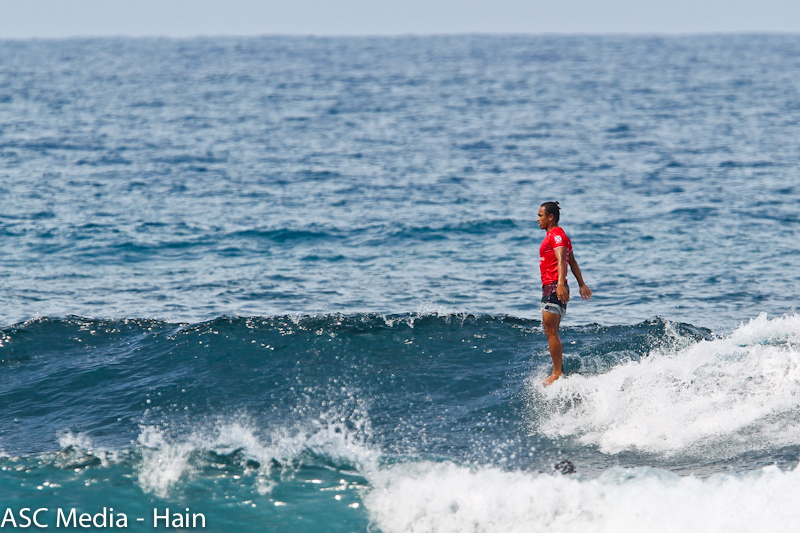 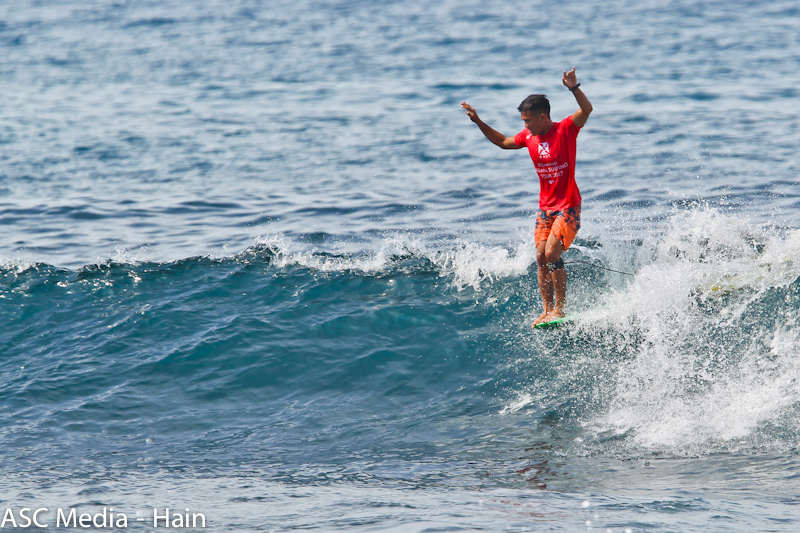 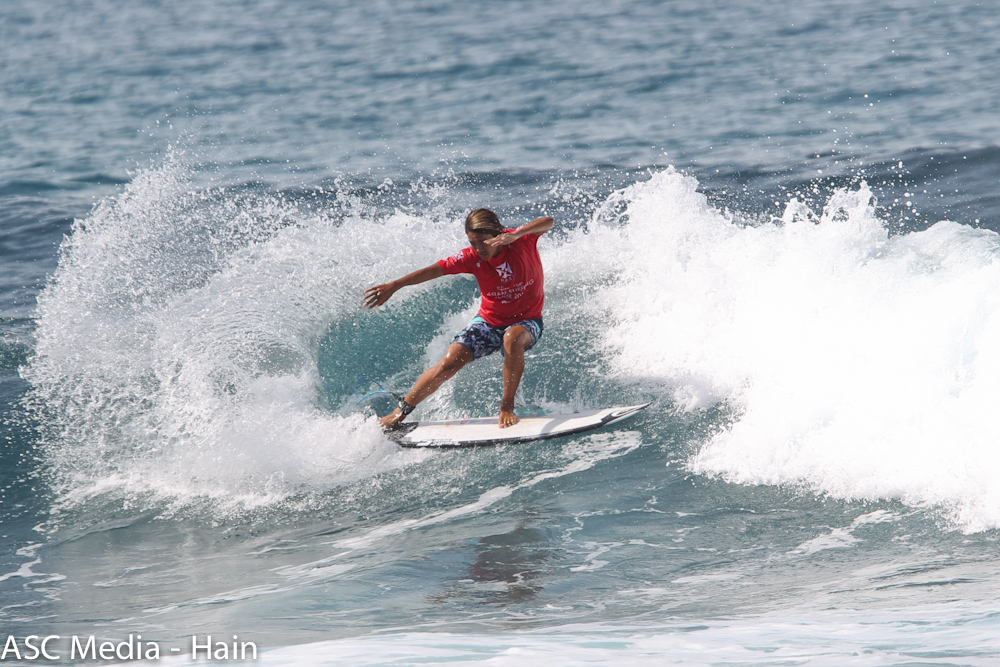 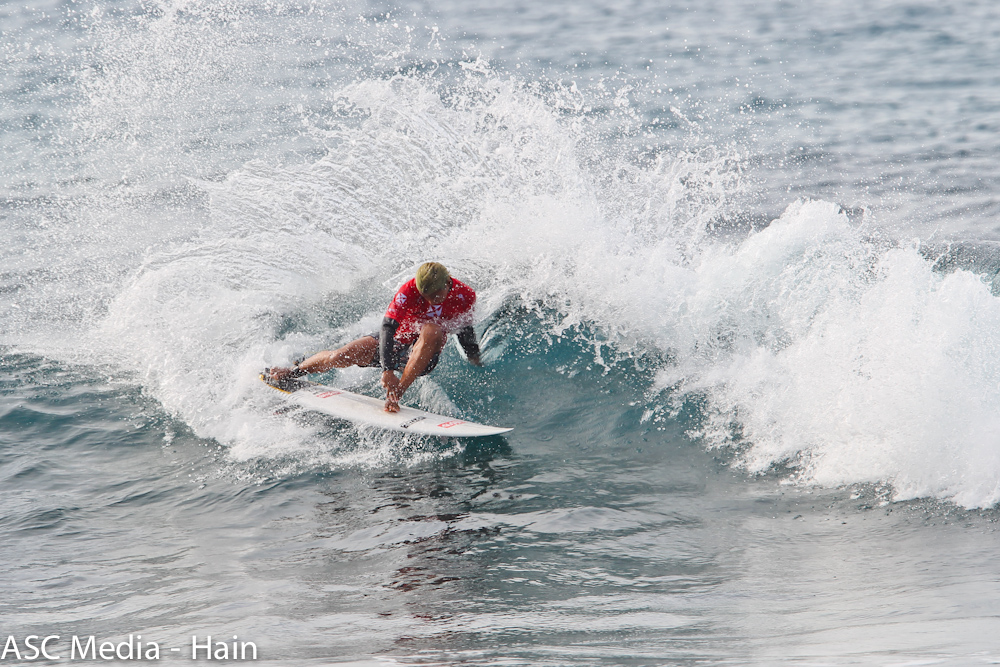 ...today on the second day of competition at Mona Lisa Point in La Union, Philippines.

Sekaguchi started her day in a woman-on-woman 25 minute final against Daisy Valdez in the culmination of the Women’s Longboard Division, coming up short and ending in second place.  But a few hours later in her Women’s Shortboard final against the Philippines Nilbie Blancada she found redemption not only getting the victory but also claiming the RAST Women’s Shortboard Championship.

Up against a very dangerous opponent in Blancada, who was last year’s Asian Surfing Tour Women’s Champion, Sekaguchi wasted no time and up the biggest wave score of the final on her first wave, a 6.67 (out of a possible 10 points).  Then the ocean went very quiet, leaving Blancada waiting anxiously for a good scoring opportunity.   She made a couple of attempts but couldn’t get into any kind of rhythm, and was obviously very frustrated, ending the final with her highest scoring wave a 4.83.  Final total scores were Sekaguchi with 9.84 and Blancada with a 6.33 wave score total (out of a possible 20 points).

“I’m really happy to win today, as I competed against Nildie in the quarterfinals and I knew how good she can surf,” said Sekaguchi.  “So because I can’t do aerial maneuvers like she can, my plan was to use my strength which is my rail surfing to try to get the most points.  The wave conditions had changed since I surfed in the Longboard final, with not as many waves coming in, so I knew I had to surf each waves well and all the way to the end to get as many points possible.”

La Union local Daisy Valdez competed in all three RAST events this year, in both the Shortboard and Longboard Divisions, and put on an excellent display of women’s longboard surfing in her final today against Kairi Sekaguchi, using combinations of noseriding, cross-stepping and turns to claim the event victory and the RAST 2017 Women’s Longboard Championship.

“This is such a great feeling to win here at home, as it was my first time competing abroad in Bali and Japan, and I’m so happy and blessed to get the opportunity to show how I can surf and to succeed,” said Valdez.  “All the competitors are such good opponents, so I just knew I had to be confident as it was my home break and I know where the good sections of the wave are, so I used that to my advantage.  Getting both the event win and the championship are so great, thanks to everyone that supported me to make this happen.”

In the Men’s Longboard’s it was La Union’s Benito Nerida claiming the divisions highest heat total in Heat 2 of Round 2, posting first a 7.17 and then an excellent 8.33 to earn a combined heat score of 15.50.  As Nerida competed in the RAST #1 event in Bali, but didn’t compete in RAST #2 in Japan, he is looking to win the event in order to take home both the event win and the RAST 2017 Men’s Longboard Championship.

But he will have to best Indonesia’s Dean Permana, who won the RAST #2 in Japan, in Round Two tomorrow, as they are matched up in Quarterfinal 2.  If Nerida wins the event, it will result in a surf-off for the championship title, if he finishes second or less Permana will become the RAST 2017 Men’s Longboard Champion.

This is Permana’s first time in the Philippines, but as he hails from Batur Karas, a right hand point break, he feels quite comfortable at Mona Lisa point.  “This right hand wave is really good, although today I wish it was a bit bigger, but it was nice and clean this morning.  You just had to pick the right waves as not all of them would run all the way through.  The local longboarders here are really good, and I’m happy to be here, I just hope I can make it to the final,” said Permana.

The Men’s Shortboard division also saw action today, the high seeds all getting through their Round 1 heats including Indonesia’s Rio Waida, who won the RAST #1 in Bali and is currently WSL Asia’s Number 1 ranked surfer.  He had the highest combined heat total in his Round 1 heat of 13.23 out of a possible 20 points. RAST #2 winner from Japan is also in La Union for the event, so it will be a battle between those two for the Men's Shortboard title tomorrow.

Tomorrow will see the conclusion of the RAST 3 event here in La Union, with the final awarding parts on the beach at the La Point bar just next to the Little Surfmaid Hotel, so be prepared for a great party and celebration!