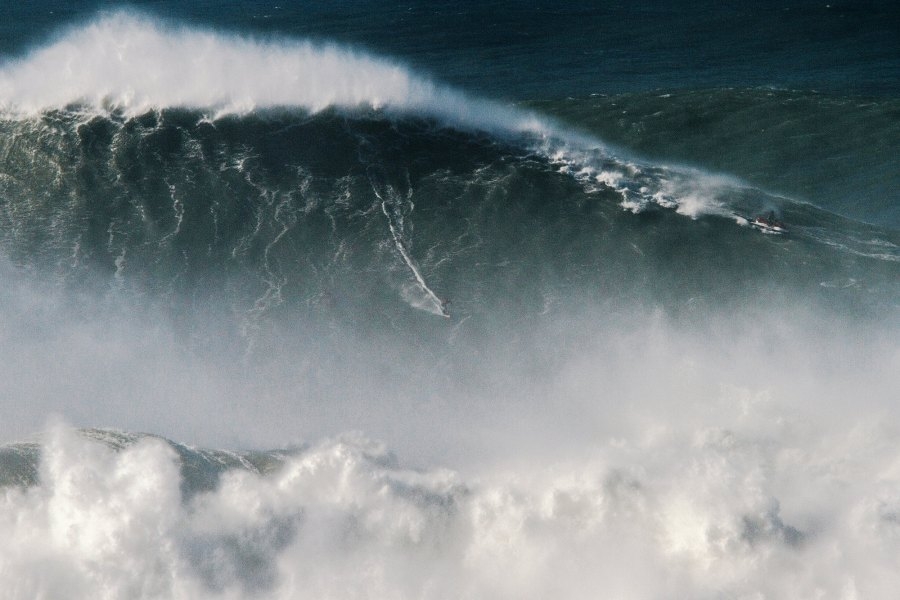 The show at the Red Bull Headquarters awarded the best rides of the past year, including a new World Record from Brazil’s Rodrigo Koxa.

Rodrigo Koxa is now the official World Record holder for the biggest wave ever surfed in history after being awarded the Quiksilver XXL Biggest Wave award tonight. The judging panel for the Big Wave Awards concluded that the record-breaking wave surfed by Koxa at Nazaré, Portugal on November 8, 2017 was 80 feet (24.38 meters) overtaking Garrett McNamara’s record, whose wave was marked at 78 feet (23.77 meters) in 2011. The Quiksilver XXL Biggest Wave Award goes to the surfer who, by any means available, catches the biggest wave of the year. Not only did Koxa win this year’s honor, but he now holds the Guinness World Record for the biggest wave surfed.

“I try to surf big waves all my life and I had a huge experience in 2014 where I almost died at Nazaré,” Koxa said. “Four months later, I had bad dreams, I didn’t travel, I got scared, and my wife helped me psychologically. Now, I’m just so happy and this is the best day of my life. Thank you to WSL, it’s a dream come true.”

The Ride of the Year showcases the most remarkable big-wave imagery of surfers racing down giant waves, and Ian Walsh’s incredible barrel ride at the 2018 Pe’ahi Challenge earned him this year’s award. Walsh also earned the Tube of the Year Award for the same wave.

“For this wave, I feel like in a lot of ways more than catching this wave, this wave caught me,” Walsh said. “It’s a great snapshot of the comradery of our sport and I feel like we all rode this wave together as a unit. Congratulations to all the other outstanding nominees who are helping progress this sport, and the water safety that’s progressed with us to allow us to do that. I thank all the surfers before us, all the surfers right now, and all the kids that will surely take this sport to unprecedented heights. Let’s all do our part to keep the oceans clean and the beaches better than we found them.”

Paige Alms earned the Hydro Flask Women’s Best Performance of the Year Award for the third time in her career. In addition to celebrating the back-to-back win, Alms was also honored for defending her Big Wave Tour Crown after winning the Pe’ahi Challenge again this season. The first women’s WSL Big Wave competition was held in 2017, and Alms has dominated the big wave surfing scene since. Next season, Alms will battle to defend her Big Wave Title for an unprecedented third-straight win as the tour sees competitions at Pe’ahi in Hawaii and Mavericks in California.

“I just want to say thank you to all the nominees, this is a really fun platform to show our sport,” said Alms. “Congratulations to all the female nominees tonight, I feel like you all push me to be a better surfer and a better person. I really like being able to call all of you my friends. You’re all so inspiring. I’d also like to thank all the photographers and videographers who are putting this spotlight on us out of the pure joy they have for the sport.”

Up-and-comer Lucas “Chumbo” Chianca earned the Men’s Best Overall Performance Award after showcasing incredible surfing this season, including his win at the Nazaré Challenge earlier this year. The 22-year-old will undoubtedly be one to watch in the upcoming season as he joins the Big Wave Tour full-time.

2016 Paddle Award winner Aaron Gold dominated the Paddle category again this year for his wave at Pe’ahi on January 14, 2018. Gold still holds the record for the biggest paddle-in wave ever surfed at 63 feet (19.2 meters) from 2016. This year’s award-winning wave was measured at 55 feet (16.76 meters).

Andrew Cotton, the standout big wave surfer representing the United Kingdom, took home one of the night’s most anticipated awards, the Wipeout of the Year Award. Unfortunately, Cotton’s gut-wrenching fall at Nazaré led to a broken l2 vertebrae and sidelined the big wave charger for six months. Cotton has been recovering since the accident and is working to return to the water to earn the Ride of the Year and Biggest Wave awards next season.

“I’d like to thank the Nazaré crew, the Mayor, and the community there,” said Cotton. “They’ve become like a family to me. Can’t thank my own family enough for putting up with all the last minute travels and schedule they deal with, it’s incredible. Since that day of the injury, I’ve progressed more each day and now I’m just looking to get back out there on the waves I love to surf. This is the dream of any big wave surfer is to be in the XXL Awards and to get on tour, but for me, it’s always been about Biggest Wave or Ride of the Year. It’s amazing to be up there in front of your heroes after being out for over six months and my goal is to be back out there in the summer or by October to really start charging again.”