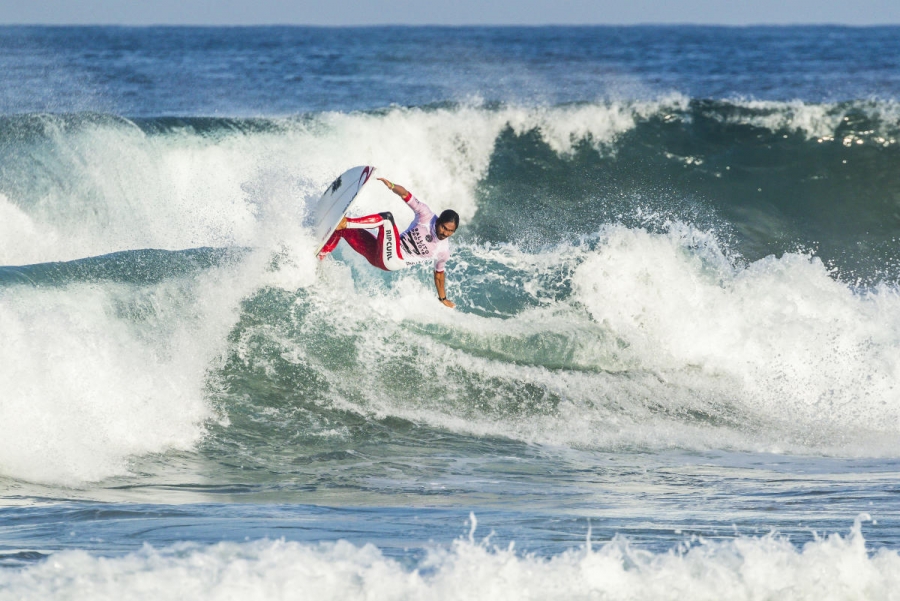 In consistent, three-to-four foot (1 meter) swell, surfers showed their grit and battled through Rounds 1 and 2 to whittle down the field. The lumpy conditions proved tricky with a few upsets scattered throughout the day. Indeed, many would bill it as the day of the two-turn-combination and it was those surfers who put together the most dynamic two turns per wave, or managed to fit in a third, who ultimately advanced.

The day belongs to Oney Anwar however. The Indonesian who is No. 61 on the QS put together the highest heat total of the Round (16.76 out of a possible 20) by some margin, thanks to an 8.83 (out of a possible 10) and a 7.93. After picking up momentum from the win by his compatriot Rio Waida in the JQS Billabong Junior Series Ballito the day before, Anwar waited patiently for the waves he had identified in the lead up to the heat and ripped his way through a stacked heat to add Miguel Pupo (BRA), No. 7 on the QS, and former Ballito winner Tanner Gudauskas (USA) to the upsets list.

A Tough Day for Local Fans

Unfortunately for the local fans, that wasn't the case for many of the South Africans in the draw, with wildcards Jake Elkington and Jordy Maree falling in Round 1, while the seeded Beyrick De Vries and Michael February - who, in his rookie season on the Championship Tour (CT) sits at No. 33 on the Jeep Leaderboard - both failed to advance out of Round 2.

Adin Masencamp, the No. 30 on the QS after his runner-up finish to Jackson Baker in the QS 1,500 Volkswagen SA Open of Surfing pres by Hurley on Saturday, carried his momentum however to advance out of his Round 1 heat behind Mateus Herdy (BRA).

"I'm super stoked to make that heat," said Masencamp. "First heats are always nail-biting and a bit nerve wracking, so I'm happy to advance and to have nailed a 7.23."

Masencamp's combined heat total of 13.40 (out of a possible 20) was made up of two good-range scores, a 7.23 (out of a possible 10) and a 6.17, heat scores which would have seen him advance out of most heats during the day, including the eight completed in Round Two.

"I'm here to compete, I want the points and that's what I'm pushing for," he added. "I'm pretty sure I established that in my Round 1 heat. I don't really care who is in my heat, I'm just going to surf as I surf and just treat them the same way I would anyone in a QS 1,000, or whatever."

Griffin Colapinto (USA), current No. 12 on the CT, and Mikey Wright (AUS), who finished third in Ballito last year and is in something of a purple patch at the moment, both booked their place in Round 3. As did Wade Carmichael (AUS), Ethan Ewing (AUS), Keanu Asing (HAW), Tanner Hendrickson (HAW), Maxime Huscenot (FRA), Flavio Nakagima (BRA) and Jacob Willcox (AUS).

Willcox pulled the proverbial rabbit out of the hat by finding arguably the biggest wave of the round and took it apart on his backhand with under two minutes to go to bounce De Vries down into third and out of contention. "I'd never had a wave like that come to me so late in a heat," said the goofyfooter.

Ryan Callinan was the other local-favorite slayer. "You kind of get those people anywhere - people with as much support as Mikey - and it's really cool to see fans get behind their favorite," Callinan said after he, along with Australian counterpart Jack Freestone put local hope February on an early flight to J-Bay. "I have an event back home where it's the same and it's really cool to have that kind of energy on the beach - whether it's for you or against your, it's good."

"A first heat loss always feels pretty bad - especially having come this far - so I'm just happy to get through that one and get over the nerves. This is the first big one of the year and I'm looking forward to getting through a few more."

Not so fortunate was Alejo Muniz (BRA), who is ranked No. 1 on the men's QS. Muniz fell to the rampant Hendrickson who had come out of Round 1 and controlled the Round 2 heat with aplomb, with Wright in second.