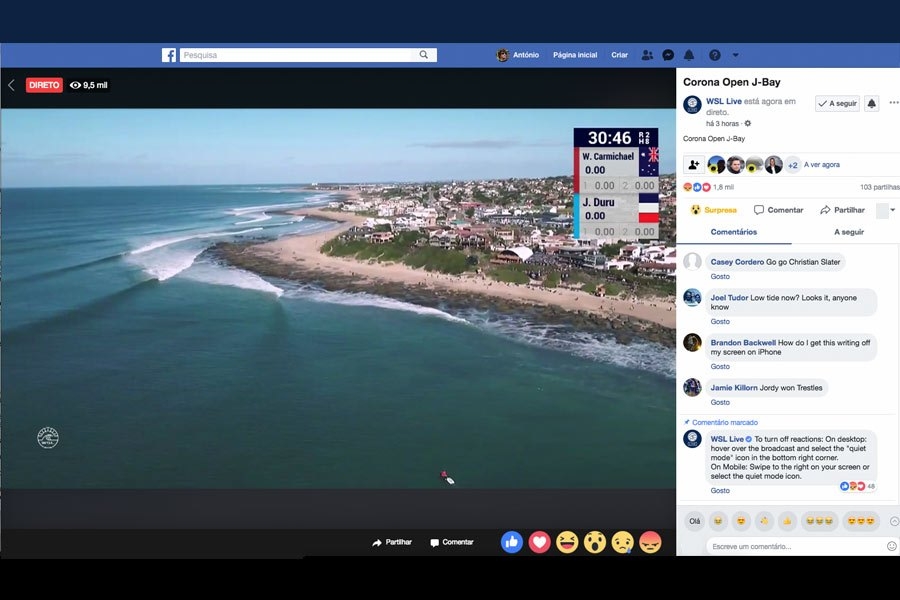 The topic of migration from the World Surf League broadcasts to Facebook is on the table....

And, apparently, it will not slow down. From this event - the Corona Open J-Bay - the main competitions of WSL become available strictly on the social network Facebook.
Well, yesterday, on the first day of the event, the surf fans went into shock, the list of complaints spread worldwide, and surfers were very angry with WSL. It is true that the World Surf League, despite being the entity that governs professional surfing, is still a company that, like all others, is privately owned, it is understood, aims the profit and financial sanity.

Perhaps the agreement, the partnership, with Facebook was frankly profitable for WSL's accounts, ( Looks like the agreement involves 30 million US for two years of exclusive FB transmissions) but it's still a disappointment, a measure that went unheeded for many reasons. The first is precisely the fact that people are forced to register on the social network in order to be able to access the broadcasts and follow the action. Well, if people nowadays do not have a Facebook account it is because they do not want to have it. Simple. In this field the WSL is proving to be very undemocratic.

Then, forgetting at times the experience of interactivity, exchange of comments and emojis for everything that is site (say too sad and childish), is also the fact that Facebook, as a social network, is not well is in free fall, but begins to lose influence and may have already reached its peak. And this on a global scale due to the loss of users, less "engagement", too much ads, controversy with data protection, false news, etc. (No, we do not have numbers about this, but from what we read it's more or less what is happening). Anyway, this is enough and fully justifies not embarking on a partnership that is raising so much dust and a chorus of displeasure.
Also the main world wide surf publications spread their opinions, one or them was the Tracks mag editor:

"I get it social media is the new normal. But social media is an invasion on our daily lives. An addiction of dopamine hits for likes from Facebook and Instagram is a global epidemic. Yes, it’s a great place for the latest viral video, sound bites of the news and a forum to rage but to watch surfing? I don’t think so. Maybe I’m over-cooking the whole thing. It’s a free service. So what if my data is mined? Privacy in the digital age is more and more harder to find. But the WSL’s decision to take $30million from Facebook in return for exclusive streaming rights for the next two years makes me feel like our fun little past-time has fallen into the hands of the Devil." Alex Workman / Tracks Mag

When the announcement of the partnership was revealed in January this year, WSL justified the decision with the approximately 14 million people, from every corner of the globe, who watched the World Surf League through Facebook in 2017. However, right now, in this event just over 12,000 people watched LIVE Open J-Bay. This seems to us to be fairly residual numbers ...
So what will be the next step?
Anterior The end of Echo Beach Surf Break at Bali? Próxima PRO SURFER OWEN WRIGHT HAS JOINED THE DHD TEAM