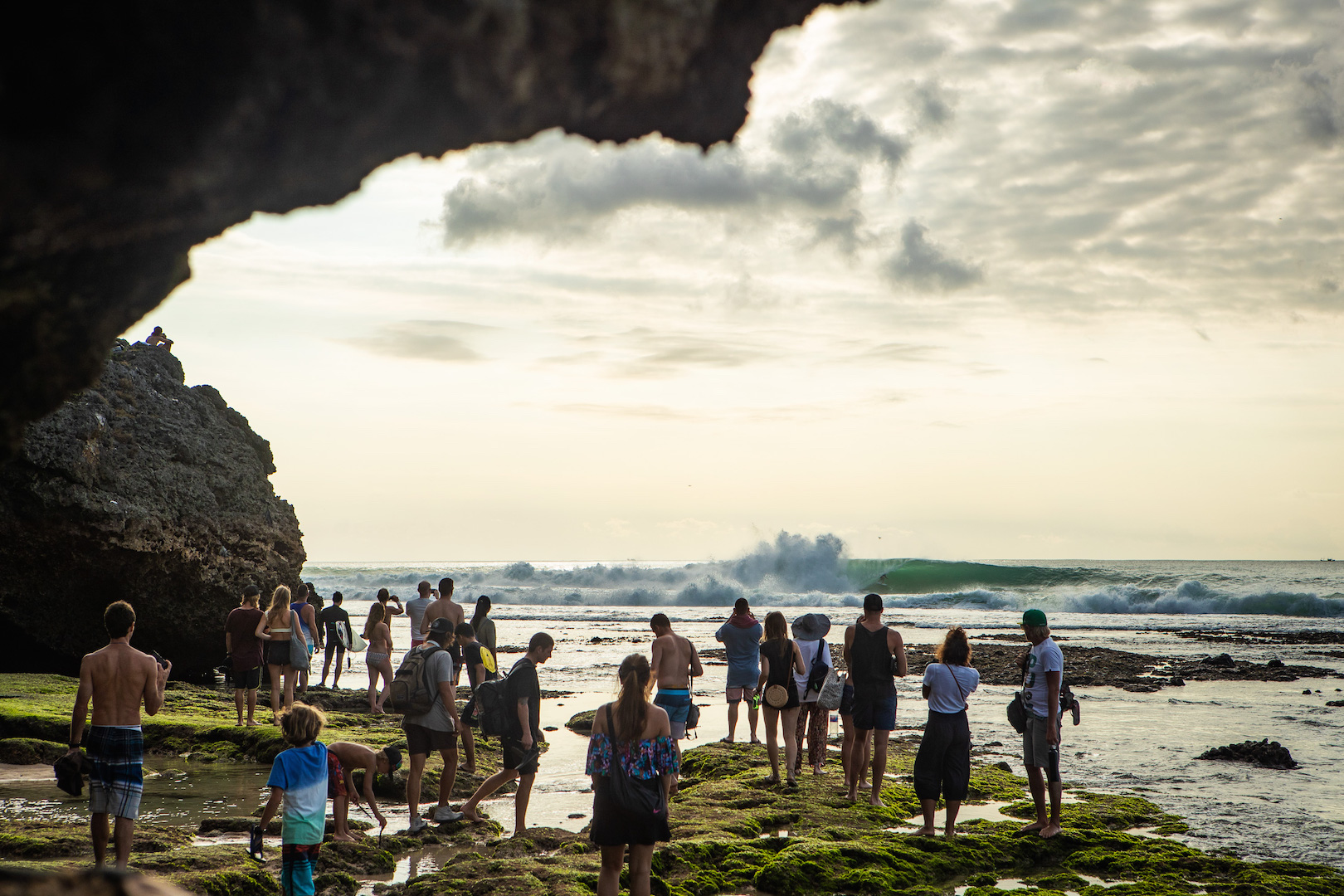 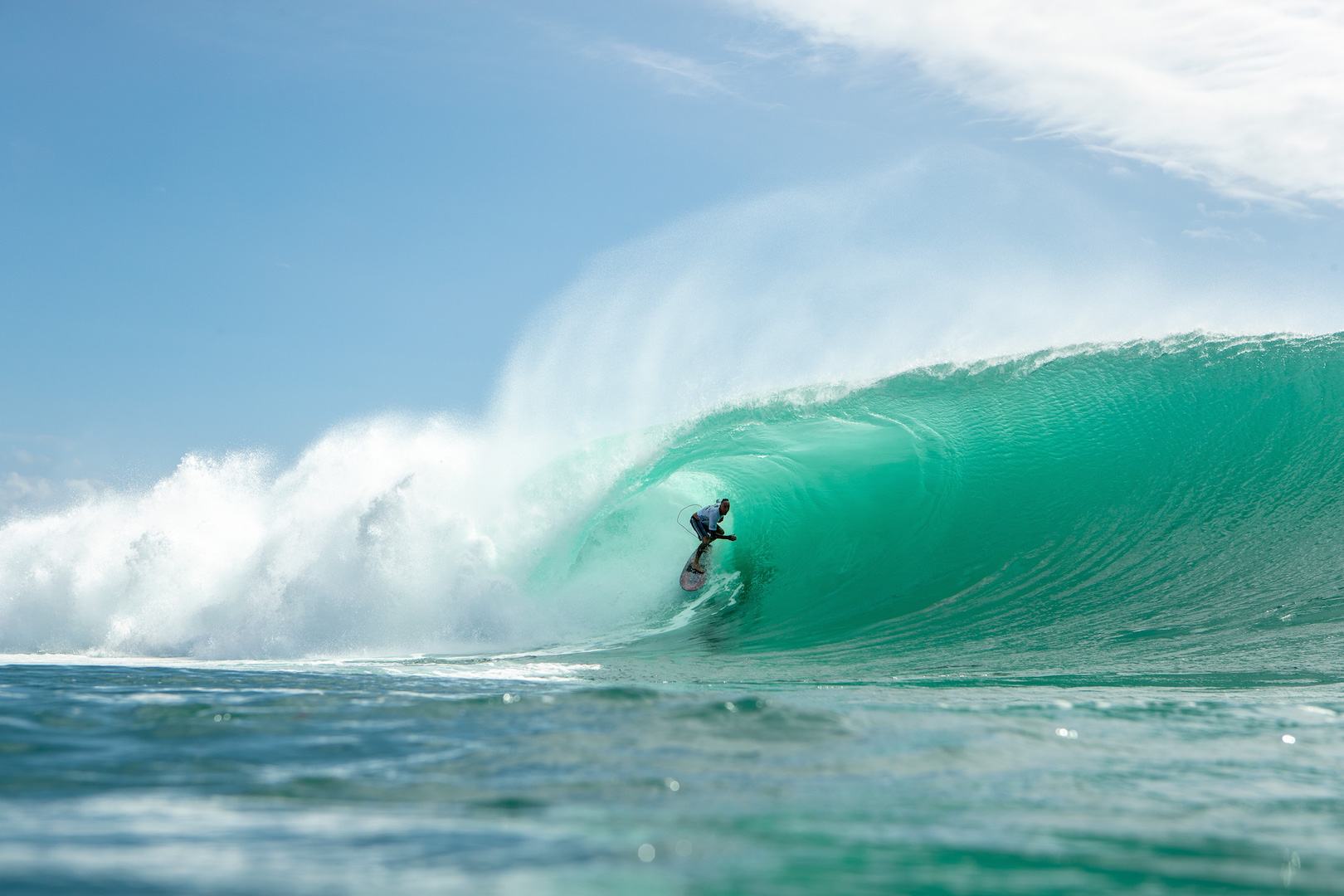 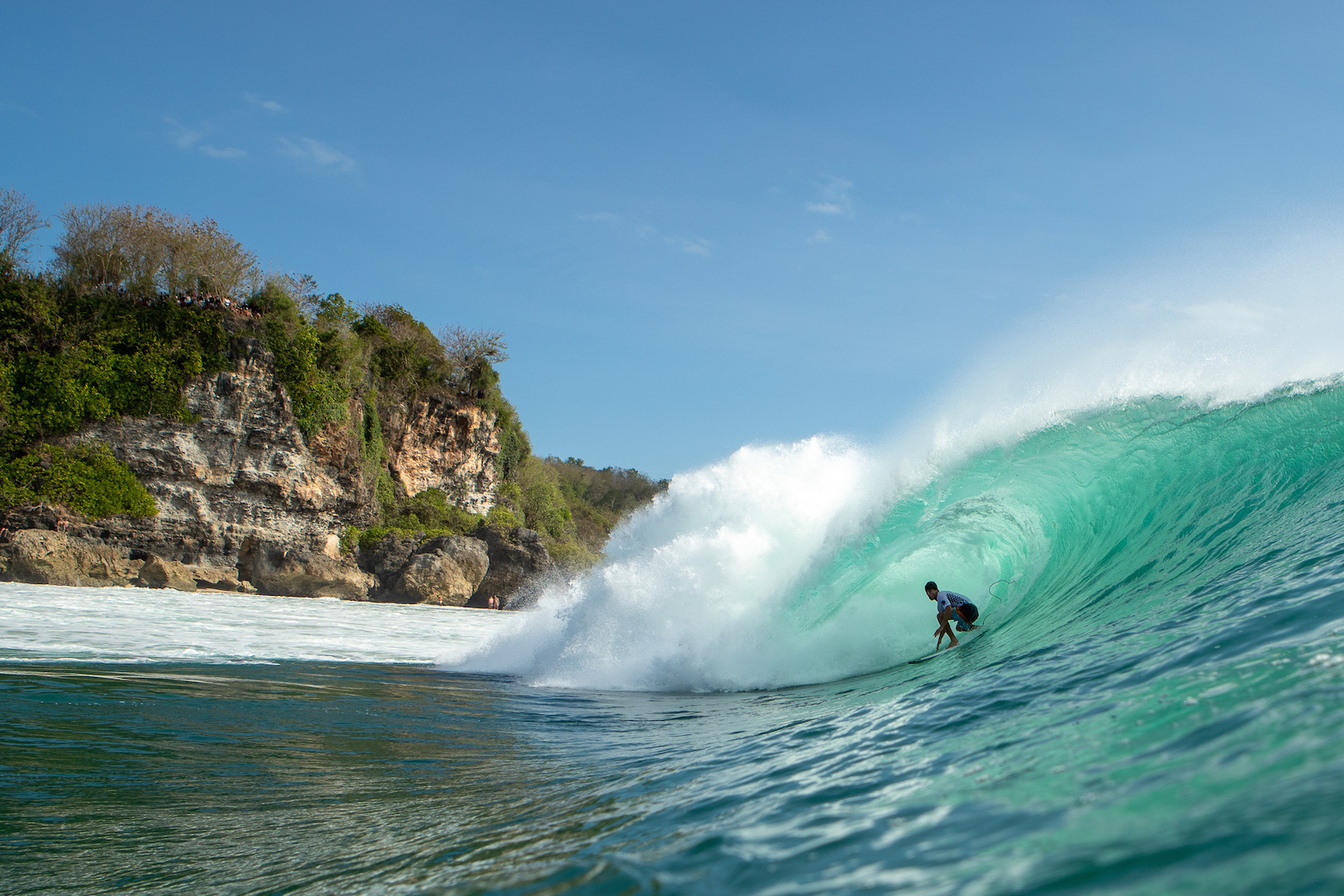 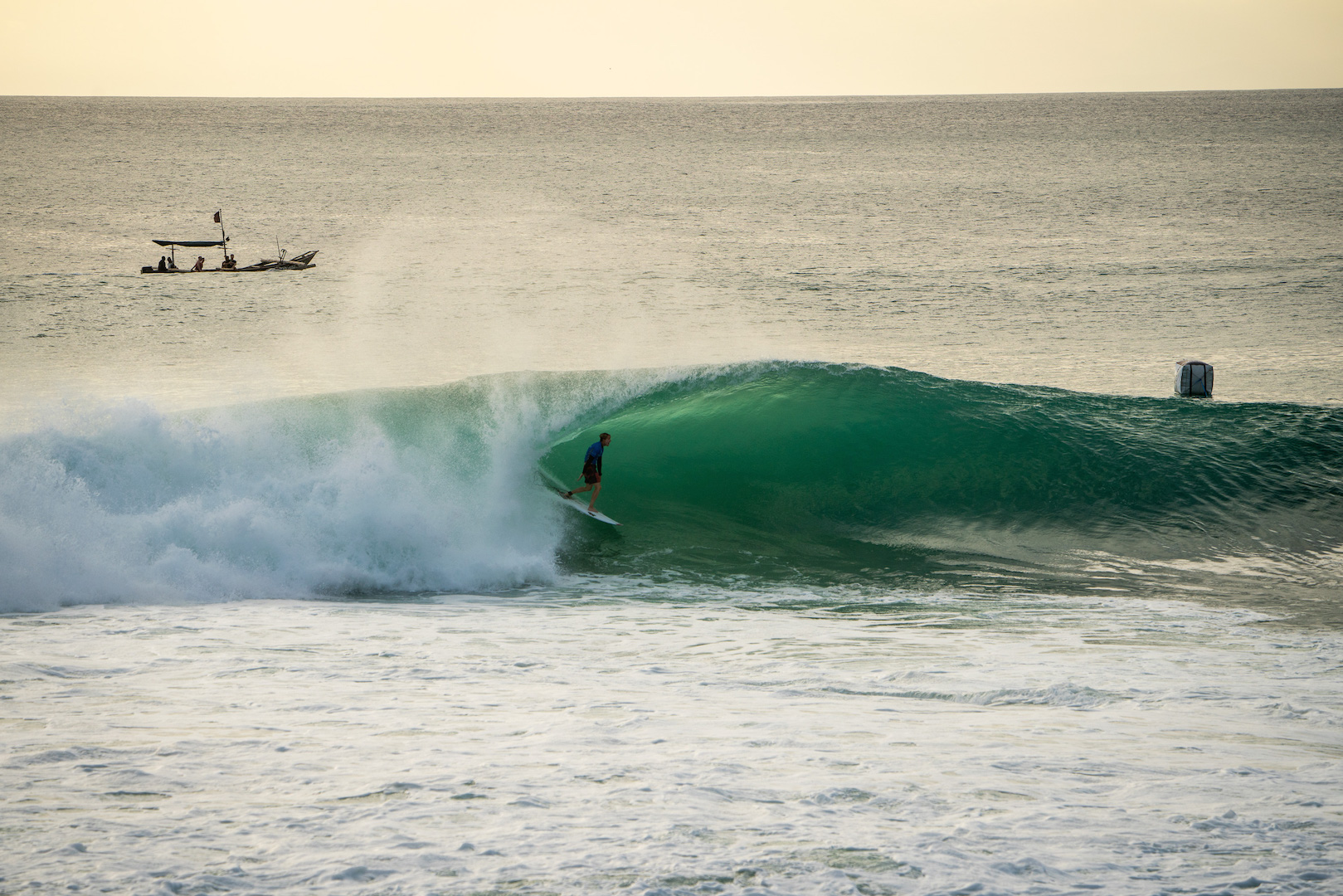 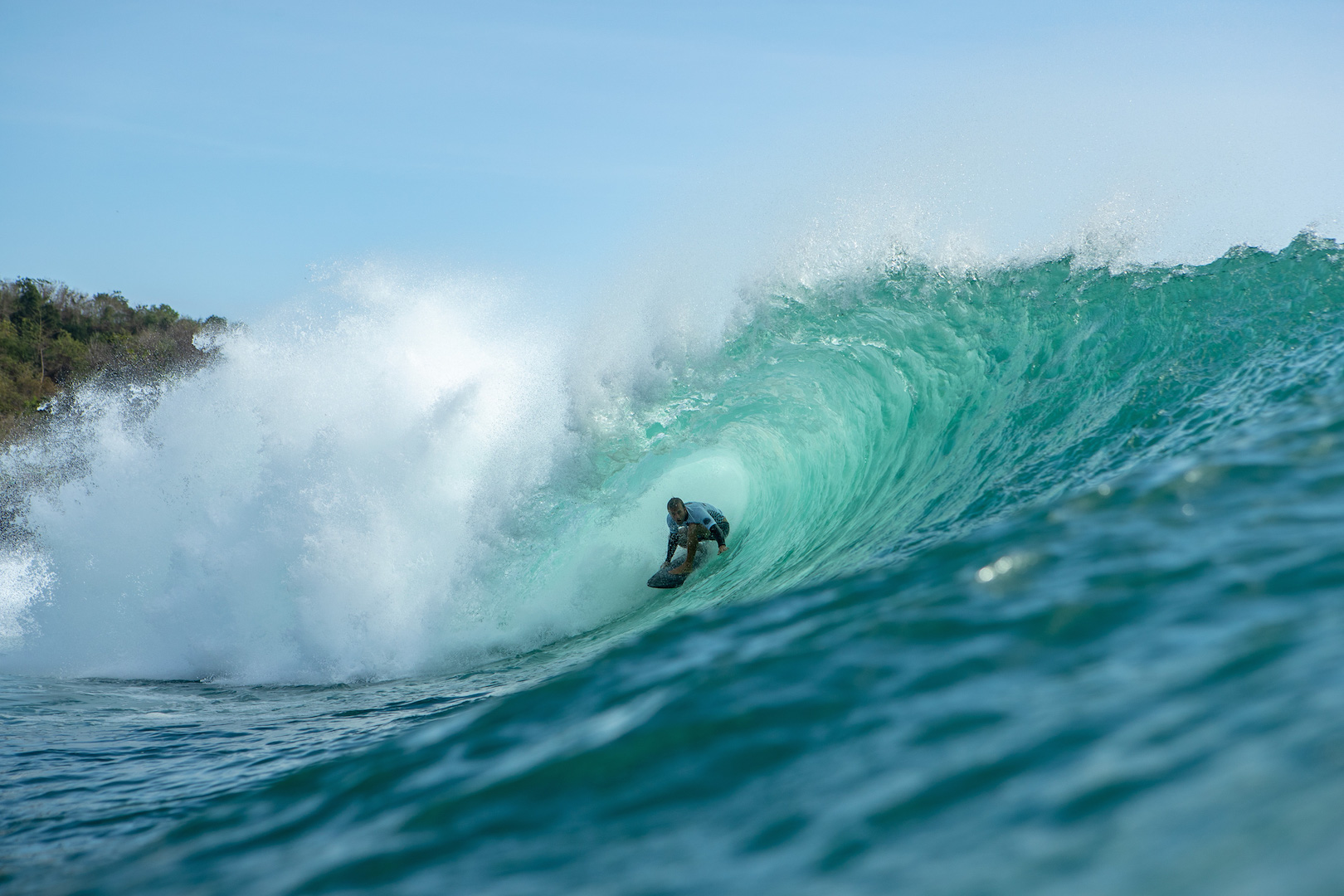 After a long slumber, Padang Padang roared back to life for the opening rounds of the Rip Curl Cup 2018 on Sunday.

A pulsing southwest swell brought 6-to-8 foot offshore barrels to Bali’s most iconic wave and an extreme afternoon low tide made for plenty of drama and carnage as competitors tried to survive the warping double-ups and avoid the dry jagged reef on the inside.

After completing Rounds 1 and 2 in epic conditions, the eight remaining surfers could potentially resume competition and crown the 2018 Rip Curl Cup Champion on Monday morning. If the barrels disappear Monday, a monster swell, the largest to hit Indonesia in years, is looming for Thursday, July 19th.

What started as a field of 16 elite tube riders, an even split between eight of the world’s finest and eight of Indonesia’s top Padang specialists, has now been cut in half. The draw is still an even split between local surfers and visitors, but the standout performers on Day 1 were clearly a pair of young guns from Western Australia, Jacob Willcox and Jack Robinson.

In his opening round campaign, Robinson posted the highest scoring ride of the day, courtesy of a draining double barrel on his backhand that drew  roars from the throngs gathered on the cliff and a 9.7 from the judges. He backed it up with another impressive deep tube for an 8.75, comboing his three competitors. Robinson would later follow it up with another 8.75 in his Round 2 heat, cruising to the Semifinals.

“You had to play it a little careful out there,” Robinson said. “We had good tide in my first heat with real good conditions, but by my second heat it was too low for me. It was the luck of the draw out there because you don’t know what you’re gonna get with each wave when the tide is so low. But I got the job done, and that’s all that matters.”

Willcox, meanwhile, surfed in back-to-back heats, an hour straight and managed to win them both, taming the mutant barrels masterfully on his forehand and finishing with the highest combined Round 1 and 2 heat totals of the day.

“I think that was the second time I’ve surfed two heats back-to-back with no break at the Rip Curl Cup,” Willcox said. “It actually worked out good. When I first paddled out it was perfect tide, but I noticed that it was drawing out fast. The local kid who was caddying for me, Ketut, told  me to go on the first wave of the set and it was such valuable information. The first waves were way better, not those weird doubling up things.”

Sunday’s Round 1 of competition was non-elimination. The eight surfers with the highest combined heat total from Rounds 1 and 2 advanced to the Semifinals.

Surfers and event directors will reconvene at Padang Padang on Monday morning (July 16th) at 6AM for a possible 7AM start to run the Semifinals. Solid 6-foot sets continued to detonate over the reef at Padang on dark Sunday evening, promising more contestable barrels for Monday morning. However a much larger swell, perhaps even too large for Padang is shaping up to slam Indonesia on Thursday, July 19th, and holding out for the second swell is also a possibility.

Robinson, the star of Day 1, is hoping event directors decide to wait until Thursday’s mega swell to finish the 2018 version of the Rip Curl Cup.

“If it’s too big, it’s better than being too small,” Robinson said. “There’s bound to be some in between ones that are really good.”