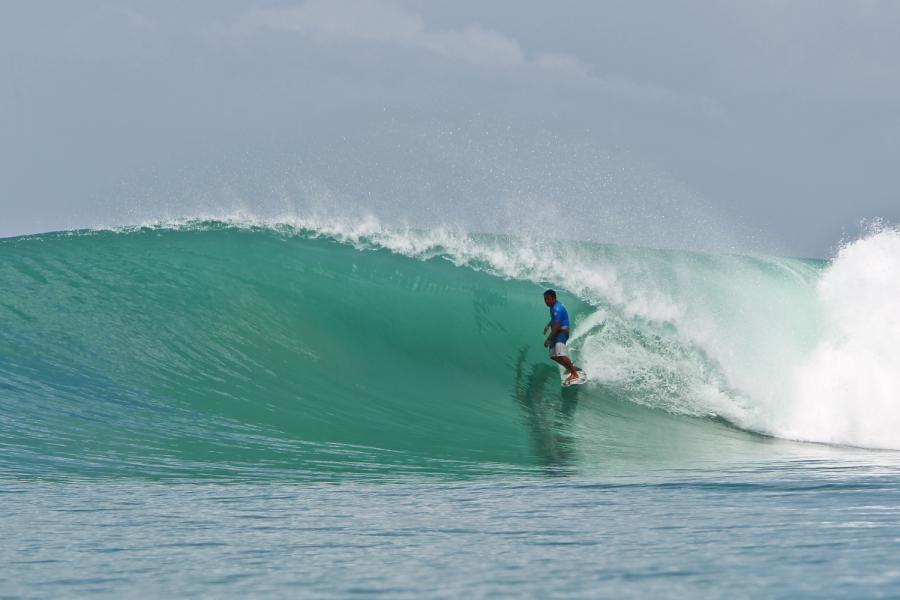 Another fantastic day of surf at Lagundri Bay on the remote island of Nias, Indonesia...

Women’s Round 1 opened the day with the standout performance from Australian surfer Vittoria Farmer. Farmer posted an excellent 8-point-ride early in her heat to convincingly win ahead of Sophie Fletcher (AUS) who also progressed in 2nd place.

New Zealand surfer Tiana-Breeze De Mooij won the opening heat of the day progressing with Indonesia’s Lorena Maruhawa in a heat that included a few of the days biggest and most powerful waves.

Hailing from Noosa on Queensland’s Sunshine Coast, Farmer’s experience on perfect right peeling point breaks shone through as she carved through a series of big turns on the pristine wave faces.

“I try and compete just selectively on the WSL QS “ said Farmer. “I like the better waves and this event is an absolute dream for me. It’s just so perfect and enjoyable to surf here and I really hope the waves stay this good for all our rounds.”

Men’s Round 2 heats saw some big scores and impressive performances all morning.

While Nick Vasicek (AUS) put on a masterclass performance with a perfect 10-point-ride, it was local Nias surfer Justin Bu’Ulolo who stole the show as the day's top performer.

Justin is known as the 'Mayor of Nias' in the surf, having grown up surfing this perfect wave nearly all his life and his performance today was all class, style and power as he won through to the Quarterfinals.

Justin posted an outstanding 9-point-ride in his Round 2 heat win care of a super stylish deep barrel which he stood tall in and he followed up with a similar 8.5 opening ride in his Round 3 heat win, where he defeated fellow Indonesian Pepin Hedrik.

Justin is through to the Quarterfinals and if the waves are barrelling on Final's day, he’s the man to beat.

“I am really pleased WSL has returned to Nias” said Justin after his heat win. “I was a 10-year-old boy watching from the rocky point when they surfed the Deep Jungle Open here in 2000 and it inspired me to surf.

“Surfing has been magnificent for the community here in Nias - Most of the kids, boys and girls, love to surf - it’s a very good lifestyle for us all and Surf Tourism is very good now for this area - It has been a dream of mine for WSL to return here and I’m very happy competing here against great international surfers.”

Quarterfinal 3 tomorrow will be an amazing spectacle as the local champion, with the large crowd behind him, takes on Indonesia’s most successful professional surfer, Dede Suryana from Java.

Organisers expect great waves again tomorrow and with just 12 heats across Men’s and Women’s there’s a reasonable chance both finals will be run and won in the perfect waves at Nias. The call will be made 7am local time for a start around 7:15am.