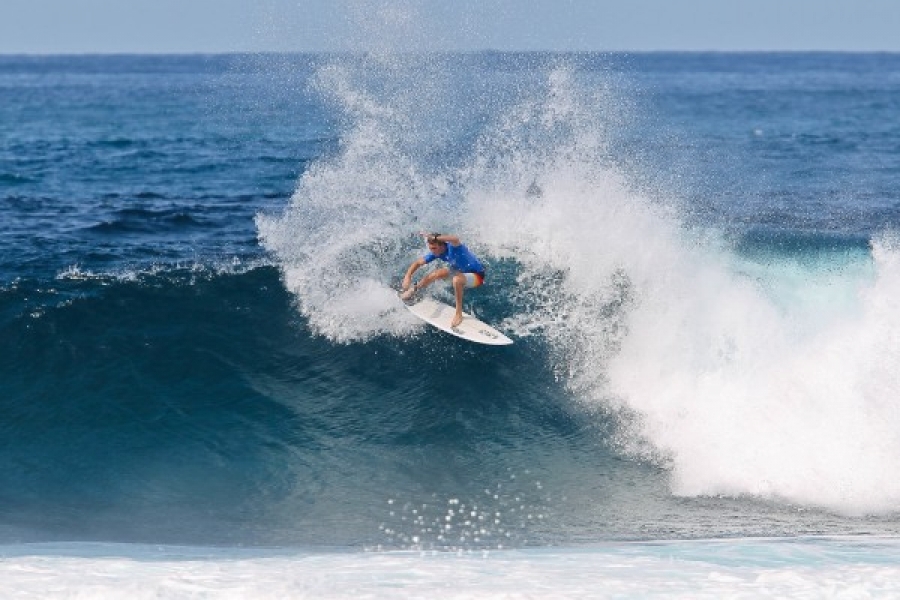 The Indonesian leg of the Qualifying Series continued today with at the West Sumbawa Pro, ...

The day started with early Rounds that mostly consisted of local surfers from Sumbawa and Lombok getting the chance to paddle out and put on a show alongside some of Indonesia's finest surfers and a handful of internationals. The local kids didn't score too big, but will always remember the day they paddled about with their Indonesian idols the likes of Garut Widiarta, Mega Artana, Raditya Rondi, Rio Waida and many more.

Liam O'Brien (Gold Coast, AUS), winner of last week's Simeulue Pro continued his winning form at the West Sumbawa Pro, posting two solid scores to claim a win in one of the most stacked heats of the day. Indonesia's Darma Putra also advanced in second position, while Mega Artana and Garut Widiarta were eliminated in third and fourth place.

"It's a super fun wave here at Yo-Yos," O'Brian said. "Some people have been saying it feels a little like Hawaii because we have these big waves and strong winds. I had a lot of fun in that heat, everyone was getting good waves and big score and that's what you want in a heat."

Ketut Aditya (Bali, IDN)who won his first ever QS at the Nias Pro last week almost suffered an early elimination today when he was in third place in the dying minutes of his opening heat. But the exciting up-and-comer managed to find a score right when he needed it to jump into first place, ahead of Lucas Wrice who also advanced in second, while Raditya Rondi and Alex McGuffin were eliminated.

"I am really enjoying competing right now," Aditya said. "I am very thankful to WSL, the Indonesian Government and the ASC crew for supporting surfing in my country. I want to travel and be a professional surfer and these events are a great start to my career."

The event ran through two heats in of Round 1, eight Heats of Round 2 and run halfway through the top seeded Round 3.
Anterior WCT Surf Ranch Pro Scorches Through Opening Day Próxima Vittoria Farmer and Liam O'Brien Win Inaugural West Sumbawa Pro