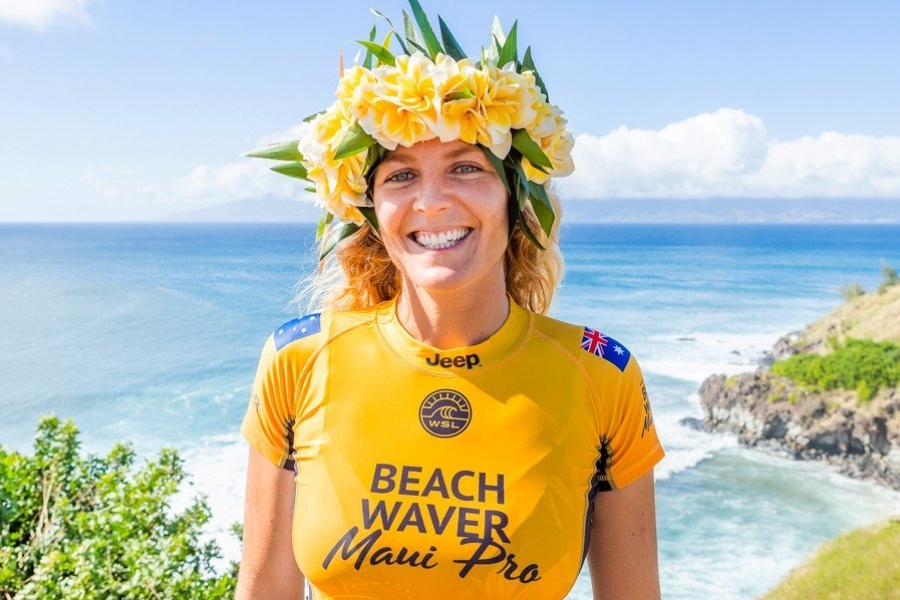 ....with hundreds of locals looking on and fans worldwide coming together to celebrate the Queen of Surf.

The race for the title came down to the final event of the 2018 WSL World Championship Tour. Gilmore needed to qualify for the semi-finals, or have fellow title race contender, Lakey Peterson, eliminated in the early rounds. The latter became a reality when Peterson faced Hawaiian wildcard, Alana Blanchard.

Whilst Peterson put up a good fight throughout the season, Gilmore was determined to maintain her leading position since claiming her first win in Bells Beach Australia in March. Today, Gilmore solidified those intentions. With this win, she joins the ranks of the greatest female athletes in the modern world, all sports combined.

She addresses the win with her eternal elegance and charm:

“I'm feeling the magic! Throughout this year I found a really nice balance in my headspace. I was able to just switch on and off when I needed to. I found those little triggers while in competition to find clarity under pressure. I just wanted it, I wanted it really bad, I wanted to win, I wanted to be the best, I wanted to get the best scores. I loved being around all the girls ripping. But I just had this really strong feeling that if I really applied myself, I could go out there and take it.” -

An accomplishment and a career respected by all her peers, both men and women:

“In my eyes, there was never a doubt that Stephanie would win her 7th World Title. I truly believe she could win a dozen World Titles and I hope that she does, if that is what she wants. Steph is a real class act and inspires so many people. Today marks a huge feat but not a surprising one. It just feels like things are right in the surf world when she is winning.”

Regarded by many as the most stylish surfer in the world, she reveals unparalleled versatility and grace in the water. Out of the water, Stephanie likes to plug in her electric guitar, graces the pages of fashion magazines and moves with ease between surf and lifestyle unlike anybody else.

Gilmore is also a longstanding supporter of female athletes, opening the way for more visibility and recognition for women’s surfing day after day. In September 2018, she became the face of pay equality for pro surfing contests after a year internationally highlighted by ongoing conversations about the gender gap. Stephanie also gives back to the next generation of female pro surfers and is an inspiration and a mentor to all the young girls at ROXY, a brand that has sponsored her for 6 years and aims to empower women in all domains.

“Stephanie is an incredible role model, not only to female surfers but to young women everywhere. Her message of confidence, respect and her incredible competitive spirit make her an example for all. The entire ROXY family is extremely proud of Stephanie and congratulates her in this success.” - Emilie Souvras, Global General Manager, ROXY

Stephanie has dominated women’s professional surfing since she entered the scene in 2007 – winning a world title as a rookie and following with five titles in as many attempts – an accomplishment no other surfer, male or female, has achieved in the history of surfing.

Beyond her seven world titles, Stephanie has 32 elite World Tour victories. For her triumphs, Stephanie has also been awarded both the Laureus World Sports Award in 2010, considered the most prestigious award in action sports worldwide, and has received two ESPN ESPYs for Female Action Sports Person in 2011 and 2013.