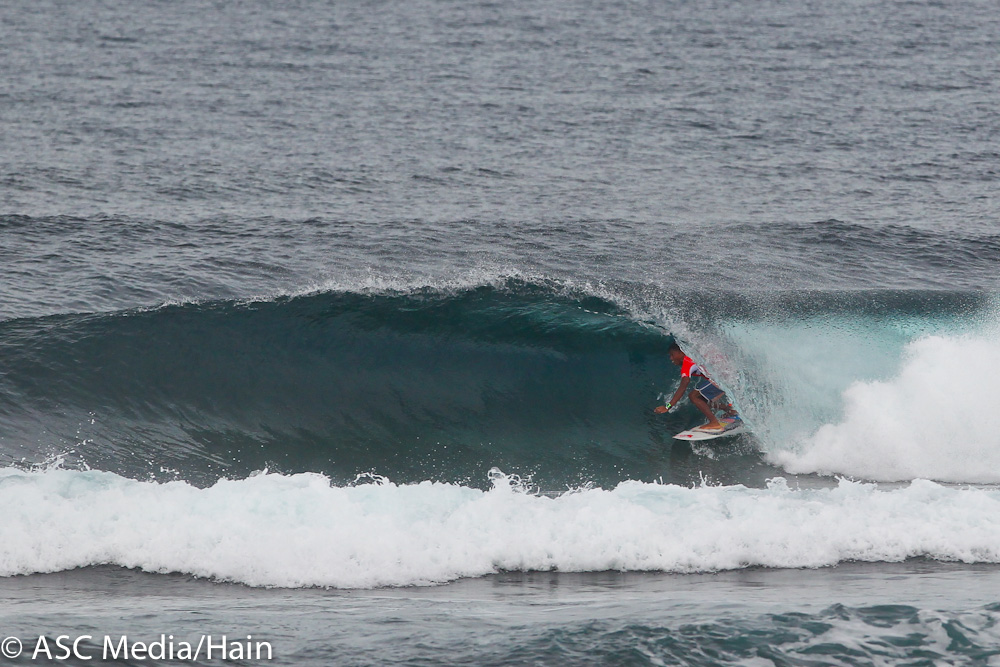 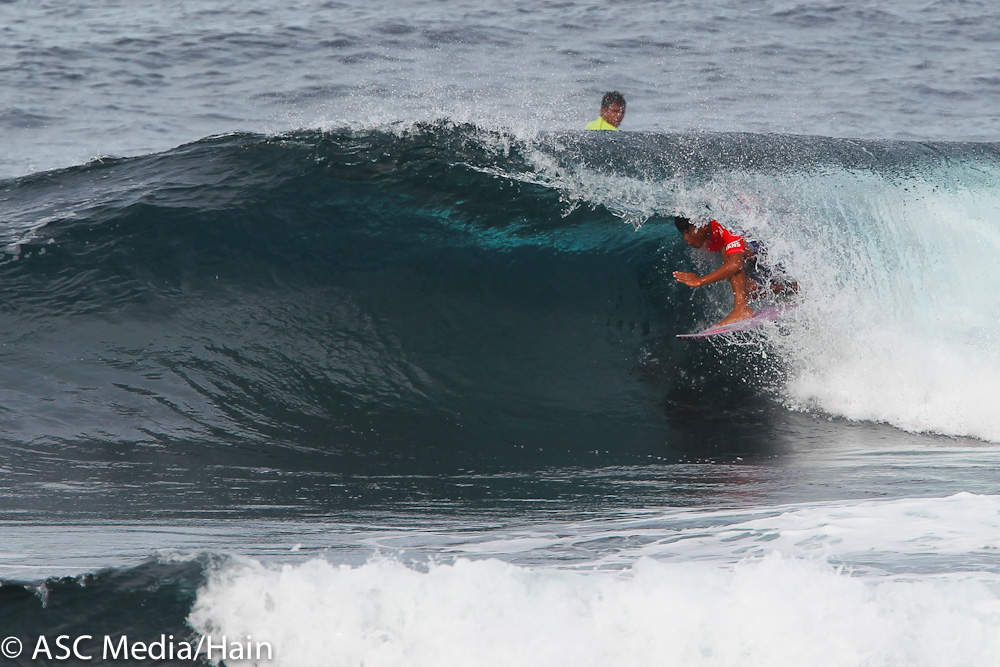 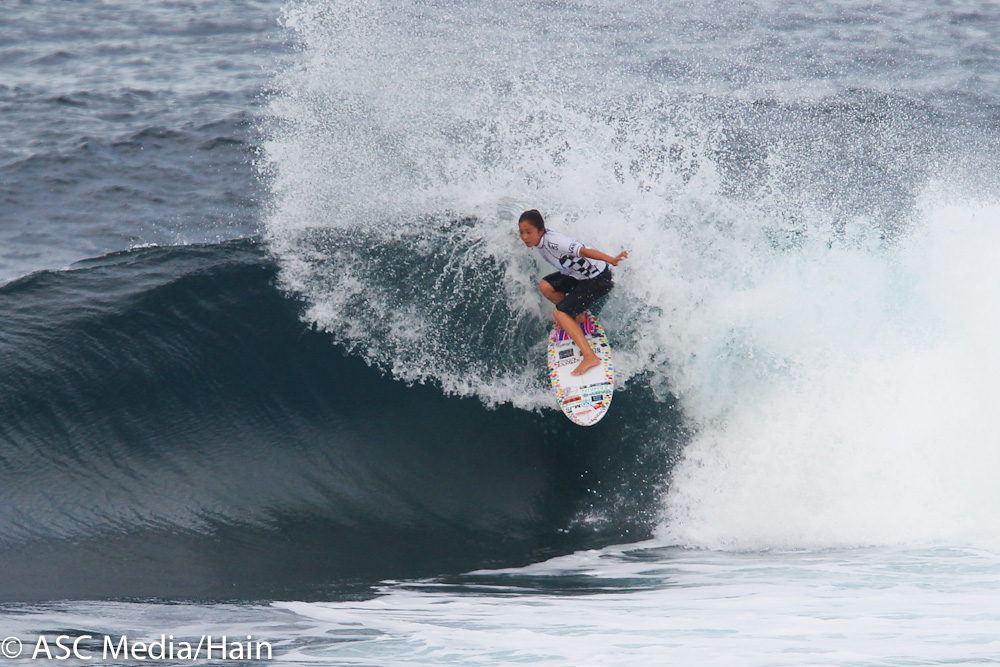 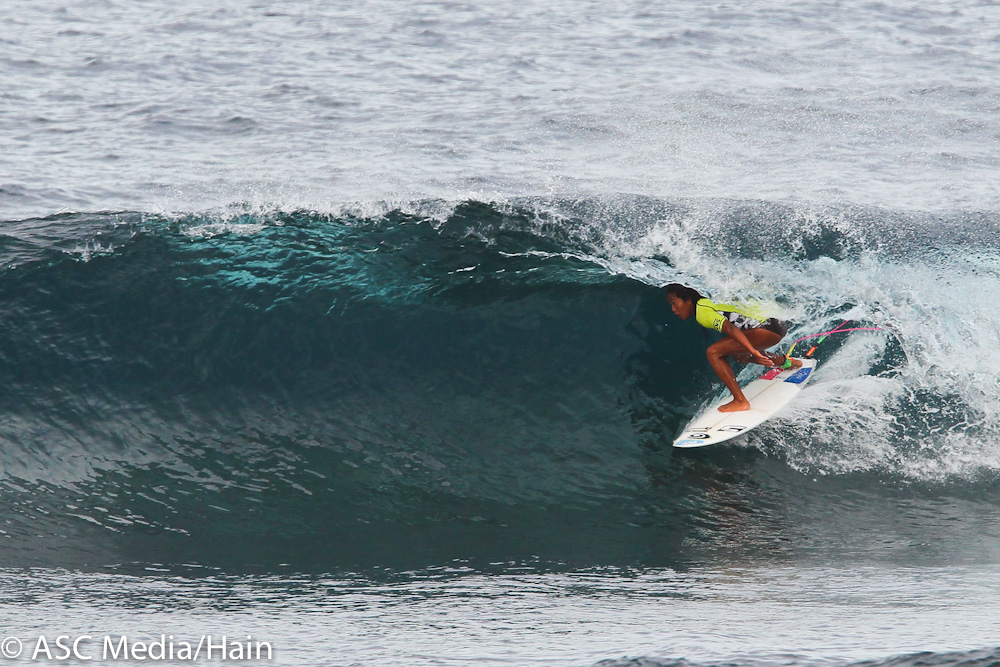 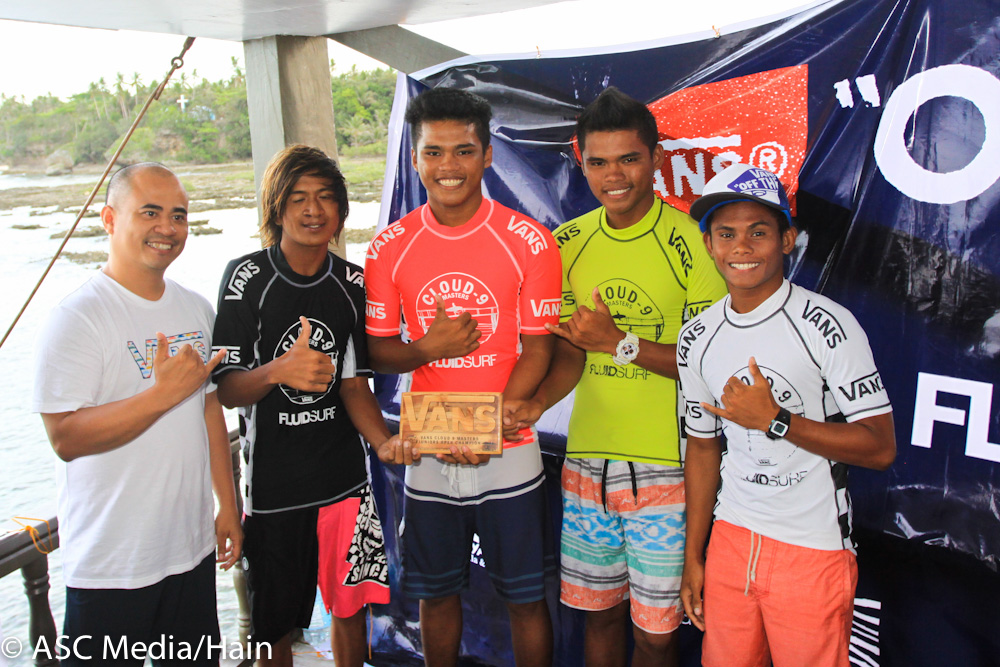 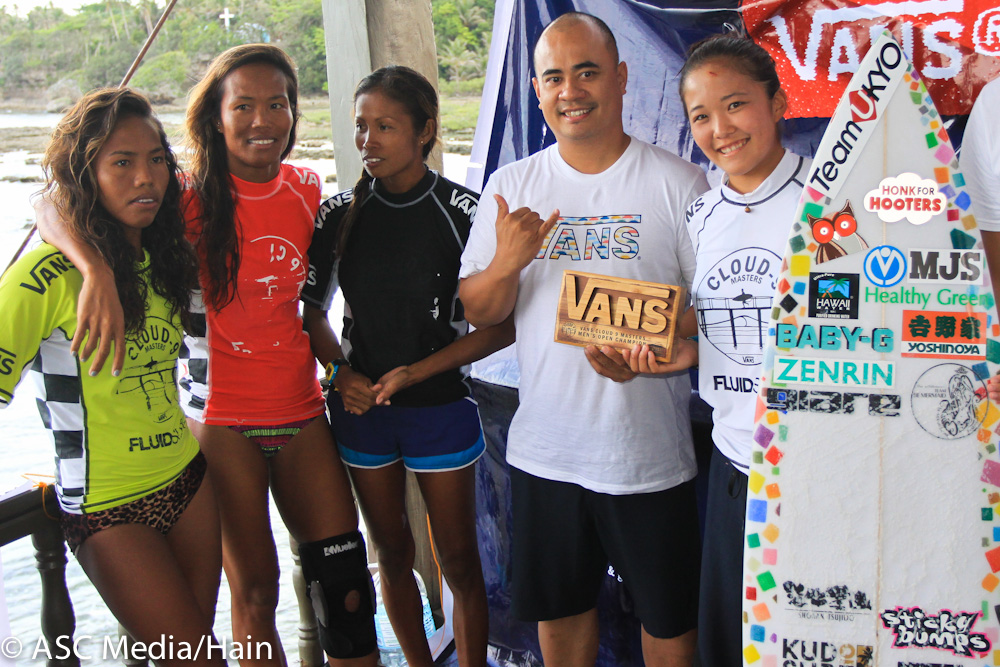 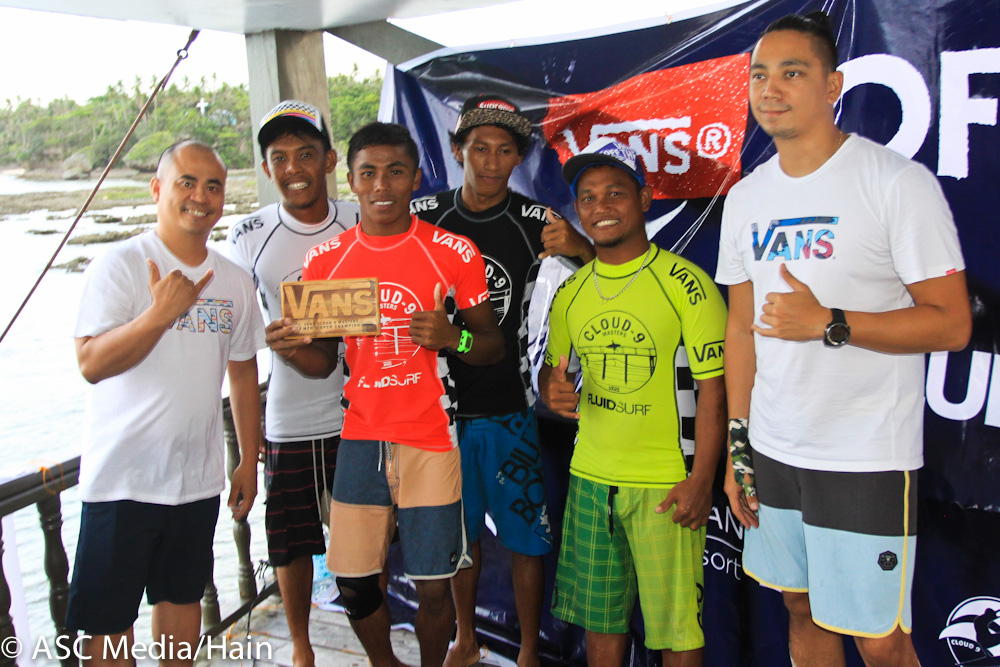 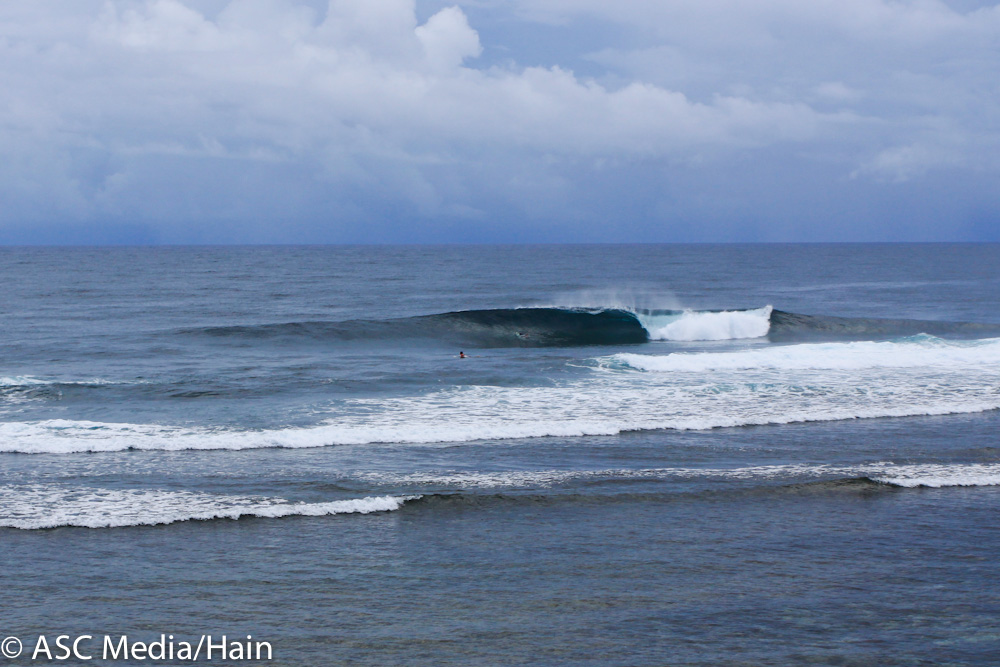 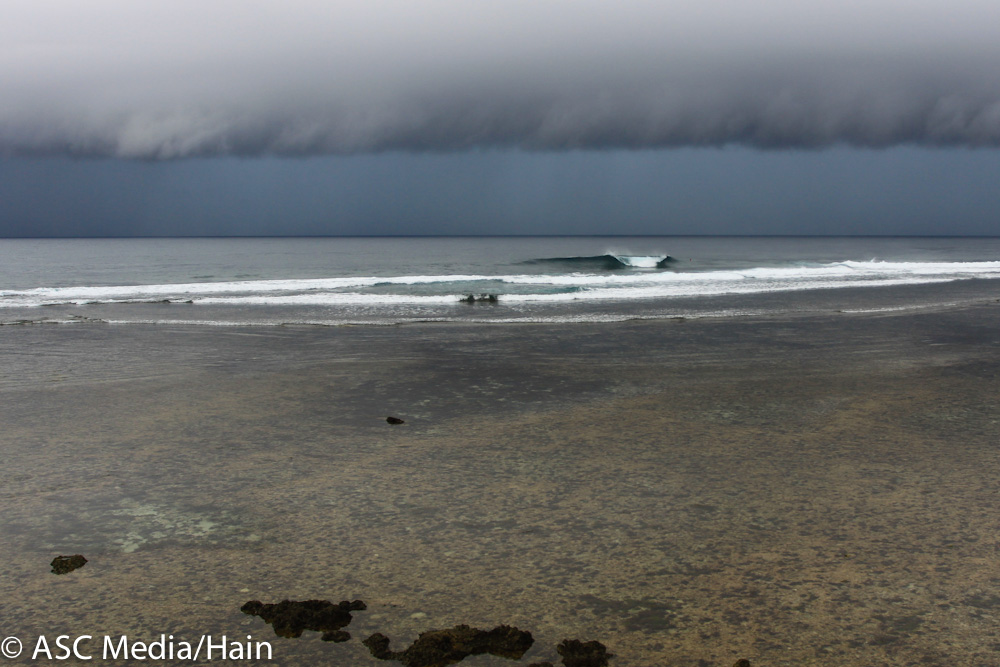 The early morning light yesterday morning revealed the welcome sight of iconic Cloud 9 offering up glassy and barreling 2-4 foot perfection to start the final day of the Van’s Cloud 9 Masters, a day that would see wave and weather conditions run from glassy and calm to a torrential downpour and back again to near perfect conditions.

In the first of the afternoon finals it was Mike Escoltura taking the Junior Division win over John Mark Tokong, who had been surfing brilliantly all event long, winning every heat but his semifinal, couldn’t seem to find his rhythm in the final against the solid rail and barrel surfing of 18 year old Escoltura, whose twin brother Mark was also in the final.  When asked how he felt about being the Junior Master of Cloud 9 he replied, “I’m so happy and I thank God that I got the good waves today, and also thanks to my sponsor who gave me the chance to compete here.   I’m studying for college now so that’s why I didn’t have so much time to practice, but I think it was just my opportunity to win today.  I’m very proud to be the winner here, and hope I can win again next year in the Open.”

In the Women’s Division it was another upset as perpetual local winner Nilbie Blancada gave away the final to 2013 ASC Women’s Champion Rina Kitazawa from Japan at literally the last second. With Rina having gotten to her feet just as the horn blew time over, Nilbie stood up on the same wave just a few meters down the line and interfered with Rina’s ability to continue on the wave.  The interference wasn’t immediately called as it was so close, but a video review as the results were being tabulated showed that there was indeed interference, giving Rina the win. “I’m really happy to be the winner here at Cloud 9,” said Rina.  “I got here a week ago and have been practicing because I know how hard it is to beat the locals here, especially Nilbie and her sister Nildie.  I’m glad we got good waves today for the final, and yes I got lucky because Nilbie made a mistake, unlucky for her, but I’m still happy to be the winner,” she added.

In the Men’s Open Division it was really no surprise to anyone when Edito “Piso” Alcala was announced the winner, having won so many contests at Cloud 9 over the last few years.  What was surprising is that he is still recovering from a rather severe knee injury, and still only at 80% capacity by his own evaluation.  Even so, Piso won ever heat convincingly in every wave condition on offer during the event, equally mixing up barrels, hacks, big full rail carves, and floaters.  Normally also an aerial specialist as well, due to his knee injury he eliminated that maneuver from his repertoire for this event.  When asked how he pulled of a win against the other guys who were operating at 100%, he replied, “Yes, even though I’m coming back from an injury and not yet 100%, I have been preparing for this competition.  I knew I just had to be patient and pick the right waves, and not do anything too crazy.  Just do my business and get the job done, that was my plan.  I did think about my injury and so I’m always extra careful, thinking what to do and how to do it.  So luckily it all worked out for me…and I got the win today!

Vans Philippines CEO Wendell Cunanan was all smiles in the tower after announcing the winners, stoked with his decision to support this event, saying, “Everything has really been beyond expectations here at Cloud 9 with this event.  This final day has just been fantastic, with non-stop action from early this morning until finishing up this afternoon.  We finally got to see some clean Cloud 9 barrels and the guys really blowing up,…and the girls too.  Everybody has been so great, from the local government to the police, the medical crew, Dencio and everybody that helped out, so I guess I’ll just say I am, in a word, overwhelmed!  I mean I knew this place was good but I didn’t know it would be this great.  We’re now looking forward to the next couple of years of supporting this event, and watching the surfers grow and progress so they can get out to other countries and begin competing on the larger stage.  At the end I don’t even need to give you my opinion or a description of how it all went…just go to the event videos that Sean made and press play….that says it all!”

Tonight will be the official end of the event with a live band and the formal awards presentation at the Boulevard in the nearby town of General Luna, but as the swell was pumping and the timing seemed right, Contest Director Dencio Dizon make the wise decision to keep running the event through to the finals today.