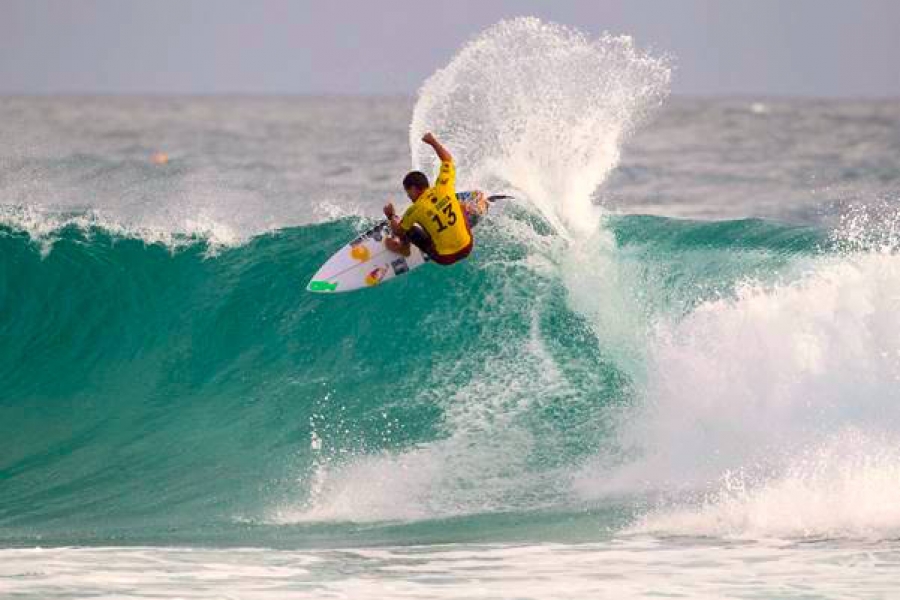 The world’s best surfers returned to Snapper Rocks today to do battle in the elimination Round 2 of the Quiksilver Pro Gold Coast pres. By BOQ. Stormy seas and regular wind and rain squalls did not hamper the surfers or the fans as the event ran through Heat 1 to 10 of the first elimination round of the men’s event.

The opening stop on the 2016 Samsung Galaxy WSL Championship Tour, the Quiksilver Pro historically sets the tone for the season ahead and today’s action saw huge drama amidst some sensational surfing.
Adriano de Souza (BRA), reigning WSL Champion, opened action this morning by knocking out Quiksilver Trials winner Wade Carmichael (AUS) from competition. De Souza locked down two solid rides, giving him a 15.30 over Carmichael’s 11.00 combined score. “I came here about a month ago and started training for this event,” said De Souza. “It was good for me to come a month earlier and start practice, to see Mick and Joel and all those guys on the water has given me motivation, and I am happy to make this heat because Wade Carmichael surfed extremely well in Round 1. I hope I continue this form into the next round.”

Sebastian Zietz (HAW) pulled a 7.60 buzzer-beater to take the lead over last year’s Quiksilver Pro runner-up and presumed 2016 WSL Title contender Julian Wilson (AUS). With only 1.23 points separating the two competitors, the injury replacement will advance to Round 3 and Wilson will be out of the event with an equal 25th place finish.
“I was just glad that I surfed smart. There were a lot of waves that kinda came at the end there that I usually would’ve gone on,” said Zietz after his heat. “I just stood my ground and somebody sent me one and it was a pretty good wave. It was a slow heat, the tide is kind of getting funky and you’ve got to pick the right ones.”


Stuart Kennedy (AUS), who gained entry into the event as an injury replacement, caused a massive upset in his Round 2 by eliminating 11-time World Champion and four-time Quiksilver Pro Gold Coast winner, Kelly Slater (USA). With speed and commitment, Kennedy charged down the line to earn a 9.50, garnering him a collective two-wave score of 15.73 and defeating Slater’s combined 13.10 total.
“I obviously came into this event as a replacement, it feels a bit weird replacing Bede (Durbidge) because he is so good,” said Kennedy after winning his match-up. “I am going to have to face all the top seeds in every event that I get into so I just need to surf out of my skin. I just psyched myself up with some hard music before and just stuck to my game plan. That seemed to work ”

Ryan Callinan (AUS), 2016 WSL CT Rookie, continued the day’s upsets when he took on a returned-to- form Jordy Smith (ZAF). With multiple lead changes throughout the heat, Callinan was able to find the right waves to rack up a two-wave score strong enough to advance him to the next round and issue the first rookie victory of the event.
“I’m a bit overwhelmed at the moment,” said Callinan. “First heat win on the CT so it feels really good. I’m just happy to still be going in the comp and hopefully the waves are really good tomorrow. It’s been a childhood goal to validate myself as a CT surfer and over the years I have had a fair few people tell me that they feel like I deserve to be here and it makes me feel like I deserve to be here now also.” Callinan’s Round 2 victory was joined by fellow rookies Conner Coffin (USA) and Quiksilver’s Kanoa Igarashi (USA) who took down Kai Otton (AUS) and Keanu Asing (HAW) respectively.

Coffin, in particular, seemed poised against the veteran Otton, gaining an early lead and maintaining the edge to clinch by a mere 0.17 points. “I was really surprised at the beginning because I was trying to hold the inside against Kai and he kind of let me have it, and I was not expecting that,” said Coffin who will advance to Round 3. “Then I was able to pick my first wave, and luckily, I saw it had a nice wall and lined up on the inside and was able to link up a couple of good turns, so I was stoked I got a 7 on that one.”

Asing, into his second season on tour, controlled the heat right off the bat, but Igarashi stepped up his game to grab the win with a combined score of 12.27, only a 0.01 point lead over Asing. “I’ve never felt these kinds of nerves in my life before,” Igarashi said after advancing out of Round 2. “I think this heat win is really going to give me a confidence in my surfing and for the rest of the contest and for the rest of my surf career, really. I’m just really happy that I have amazing boards, amazing support, and I cannot ask for anything more.” 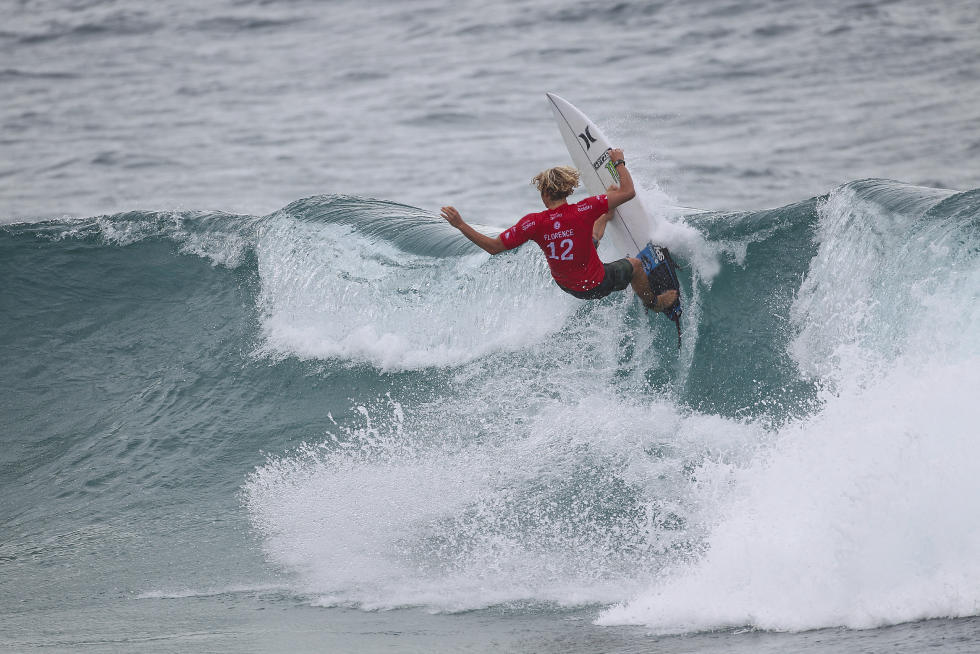 John John Florence (HAW), fresh off his emphatic victory at The Eddie at Waimea Bay, secured his place in Round 3 after defeating rookie Davey Cathels (AUS). Cathels put up a good fight, scoring 12.66, but it was not enough to beat Florence’s 14.36. “I’ve just been really focusing myself in these types of waves and that is kind of where my surfing feels like it has had slow spots in the past,” Florence said. “I want to do the best I can this year. I don’t have any movies or things like that so I’m just putting all my focus into the tour and it’s something different for me.”
When competition resumes, up first will be 2016 WSL Rookies and former WSL Junior Champions Caio Ibelli (BRA) and Jack Freestone (AUS) in Heat 11 of Round 2.

The WSL Commissioner’s Office will reconvene tomorrow morning at 7am to assess conditions for a possible 7:35am start.