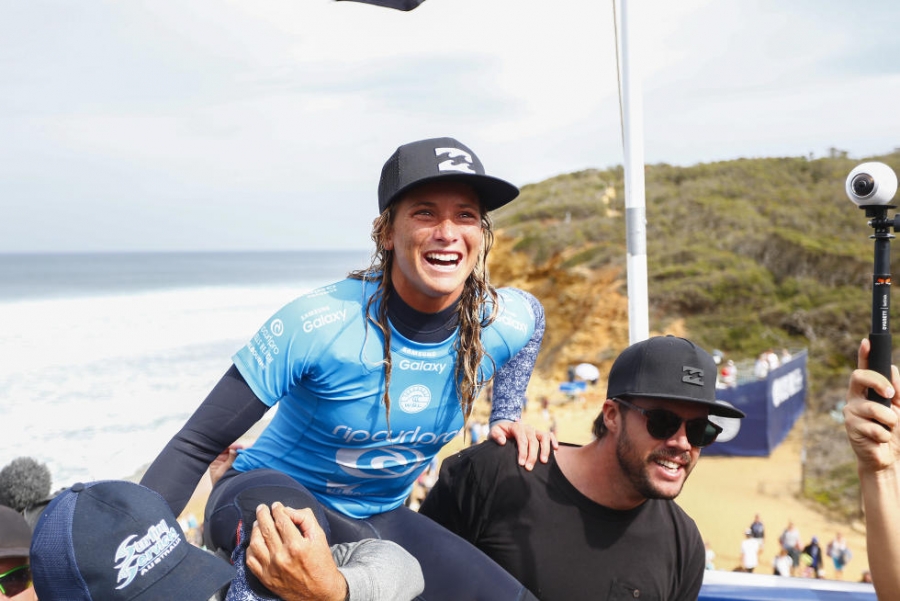 The Final match-up witnessed Conlogue and Fitzgibbons, the two-time event winner, compete in an all out brawl for the opportunity to claim the second event win on the World Surf League (WSL) Samsung Galaxy Championship Tour (CT). The women went wave for wave, throwing up massive scores, but it was the Californian who captured the lead.
Fitzgibbons opened up strong in the Final, showcasing her clean rail-to-rail surfing. With multiple lead changes throughout the each, each athlete fought hard to take control. Fizgibbons threw down an 8.10 and an 8.33, but Conlogue answered back with a 9.03, giving her the narrow 0.10 lead over Fitzgibbons.

Semifinal 1 saw Carissa Moore (HAW), three-time World Champion and defending event Champion, eliminated by Sally Fitzgibbons (AUS). Moore, who has three consecutive wins at Bells, locked in a strong 8.17 right off the bat, but did not earn enough on her second ride to defeat Fitzgibbons’ 16.16 two-wave combined score, including a massive 9.33 point ride.
Tatiana Weston-Webb (HAW), 2015 Rookie of the Year, faced Conlogue in the second Semifinal of the day. Weston-Webb charged with a 15.67 two-wave combined score, but could not close the 1.16 point gap needed to advance.

The Women’s Quarterfinals saw Stephanie Gilmore (AUS), six-time World Champion, battle rival Carissa Moore (HAW), three-time World Champion, in Heat 2 for the opportunity to enter the Semifinals. With both athletes charging for a fourth Bells victory, the two went all out to post major scores. The two CT superstars have faced-off multiple times, Moore with nine wins and Gilmore with six wins. Moore posted a near perfect 19.23 In addition to the culmination of the women’s event, the Rip Curl Pro Bells Beach men’s event completed Round 4 and the opening half of Round 5 today, setting itself up for a potential finish this weekend.

The first half of Men’s Round 5 saw Matt Wilkinson (AUS), current World No. 1, defeat presumed 2016 Title contender Julian Wilson (AUS) in Round 5 Heat 2 to advance to the Quarterfinals. Trailing Wilson for a majority of the heat, Wilkinson answered back with two huge tail-drifts giving him a 9.57. Both competitors earned a 16.57 two-wave combined score, but because Wilkinson had the highest single scoring ride - the 9.57 - he was given the win.

In non-elimination Round 4, Mick Fanning (AUS), three-time World Champion and four-time event winner, faced Jordy Smith (ZAF) and 2016 WSL Rookie Conner Coffin (USA). Coffin posted a massive 9.13 point ride to control the heat and challenge the CT heavyweights. Coffin held onto the lead and will advance straight to the Quarterfinals.

Event organizers will reconvene tomorrow at 8am local time to assess conditions for a possible start tomorrow morning.