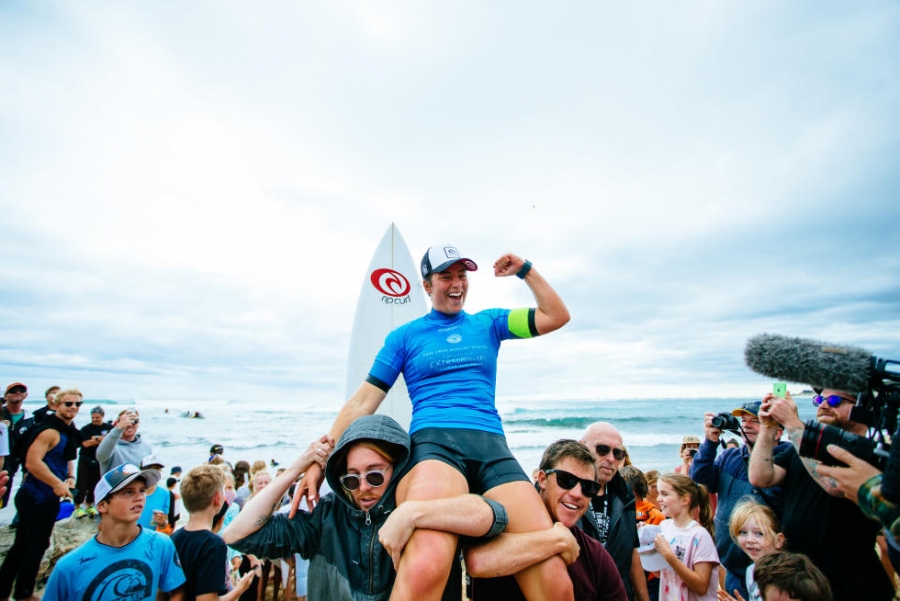 The third stop on the 2016 Samsung Galaxy WSL Championship Tour, the Drug Aware Margaret River Pro, saw firing conditions today with the world’s best surfers battling to secure a solid finish on the last stop of the Australian leg.

The Final match-up witnessed the ultimate throw-down between Wright and Conlogue. Wright unleashed a variety of maneuvers to lock in an 8.93 to take the lead ahead of Conlogue. Wright strengthened her score with a barrel for a 9.60 to put the defending event Champion in a combination situation halfway through the Final. Wright continued to put up solid numbers to back up her 18.53 two-wave combined score.

Conlogue, who has won three Titles as this event, struggled to find the scores to combat the Australian. In the last forty-five seconds a set wave came out the back. Using priority, Conlogue needed a near-perfect 9.97, but was not able to complete the ride to earn the score.
Although Conlogue will end her run with a 2nd place finish, she will continue to wear the Jeep Leaders Jersey into the next event as she remains in the 1st place position on the rankings. Throughout the competition, Conlogue continued to demonstrate a strong and consistent performance, as this marks her third straight final in the 2016 Championship Tour.

Carissa Moore (HAW), three-time WSL Champion and last year’s event runner-up, was not able to advance to the Finals against Wright. Moore blazed out the gates to secure the lead against Wright with a 14.77 through the halfway mark. Wright, needing a 7.27, answered with a 7.57 in the last two minutes of the heat. Moore found a wave out the back, but was not able to complete the ride to defeat Wright.

The Men’s Quarterfinals saw a close match-up between Italo Ferreira (BRA) and Kolohe Andino (USA). Ferreira pulled out all the stops against Andino to secure a 17.96 two-wave combined score. Ferreira kept the pressure on Andino by forcing him into a combination situation.

Andino was not able to turn in two new scores to get out of the combination. Ferreira also defeat CT heavyweight Gabriel Medina (BRA) in Heat 5 to make his way to the Semifinals.
Julian Wilson (AUS) dominated his heat against injury replacement Leonardo Fioravanti (ITA) to end his upset streak at Margaret River. Wilson showed why he is a Title contender with his back-to-back high scoring rides, including a 9.50 and an 8.67. Fioravanti fought hard to regain the lead, but was stuck in a combination situation.

Joel Parkinson (AUS) charged through the opening heat of the Men’s Quarterfinals against Nat Young (USA). Parkinson kept his clean lines to secure solid scores, including a massive tube that earned him an 8.00. Young earned a 14.24 two-wave combined score, but fell only 1.59 points short of defeating Parkinson.

Event organizers will convene tomorrow at 6:30am local time for a possible 7am start.