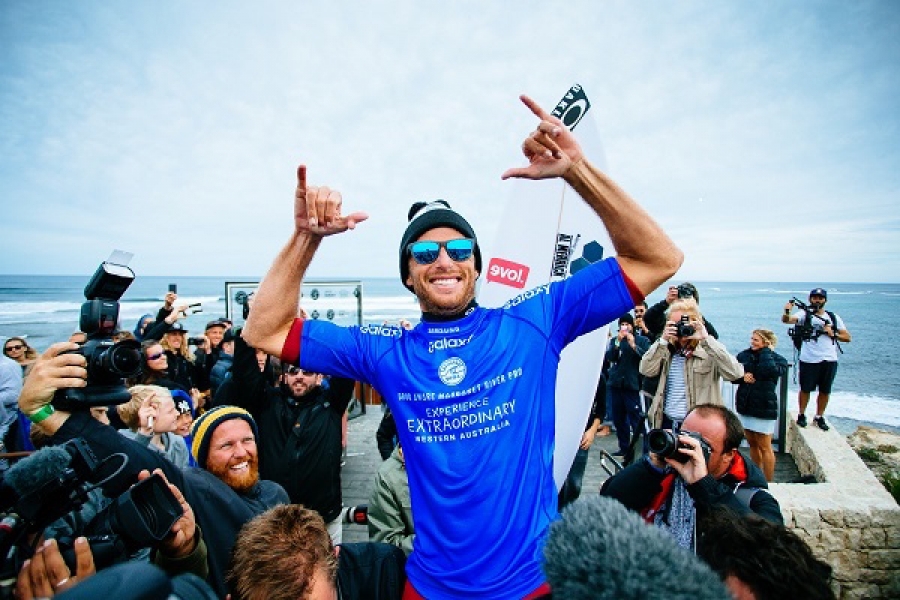 With a solid swell in the six-to-eight foot (2 - 2.5 metre) range and offshore winds, Margaret River’s Main Break delivered for the final day of the men’s competition in Western Australia as well as the last day of the Australian leg, setting up a dramatic Final between Zietz and Julian Wilson (AUS).
Wilson opened the Final quickly with a score on the board, and continued to lock in more points under Zietz’s priority. Zietz responded by posting a 9.10, showcasing his trademark Hawaiian power and style. With only five minutes left on the clock, a set out the back gave Zietz the opportunity to make up lost ground. Wilson took off on the first wave of the set to separate his score, but Zietz answered back to take the lead. Zietz secured a 17.40 two-wave combined score to defeat Wilson’s 16.67.

“I am stoked,” Zietz said. “The pressure was on and I pulled that last maneuver in the white-water and made it. To win was definitely the goal I’d set for a long time. It is epic to win a CT event being against all the top guys and come out on top. I just want to dedicate this win to my family and everyone at home. Thank you everyone who has pushed me and helped me along the way.”
After narrowly failing to requalify for this season’s elite tour, Zietz has served as an injury replacement across the three Australian leg events. Today’s win now vaults the Hawaiian to No. 2 in the world heading into the remainder of the year.
“Falling off tour was really hard and made me feel like a kook, so I just went home and got a lot of waves to get back into rhythm,” continued Zietz. “I was psyched to hit the Qualifying Series and get the call up for the CT. It was an amazing contest. We had killer waves and good wind. Western Australia in general is epic.”

“I love the wave here and the crowd that comes down,” said Wilson. “That was a good final. Massive congrats to Seabass [Sebastian Zietz] for his first win. We were able to go blow for blow and have two great heat totals out there. I am happy to get a good result here and Bells was a better result than last year. I look forward to the rest of the year and to carry that momentum and fire into Brazil.”
Semifinal 1 saw Joel Parkinson (AUS) battle Wilson for a spot in the Finals. Parkinson fought hard to get the first score on the board, but after posting up the score, Wilson fired back to take the lead. Wilson and Parkinson went wave for wave, but Wilson’s 16.60 held strong to keep the lead. Parkinson was not able to find the score to close the 1.10 point gap.

“It was one wave I missed, I think Julian got a 6.90 point ride on it,” Parkinson said. “It did not matter in the end, but I think it really mattered for the rhythm of what waves were in priority. I am pretty angry at myself and I cannot believe I missed the wave. In a positive way, I am really happy that I am angry. It means I care a lot and that I let another opportunity slip by. I am fired up for the next one.”
Italo Ferreira (BRA), the 2015 Rookie of the Year, faced Zietz in Semifinal 2. Zietz locked in a 7.17 to set the rhythm early. The two battled with each wave and the heat saw multiple lead changes throughout. Ferreira struggled to finish off crucial rides, allowing Zietz to take the lead. Zietz threw up a massive 9.10 to strengthen his score even further. Ferreira was not able to find the 9.50 required to take down the injury replacement.
“It was a good result again,” Ferreira said “I got the same result at Bells, and I am so happy that I have been surfing so well in these first three events. Now it is on to Brazil. I have amazing support there. My focus is to get another great result in Brazil.”

Matt Wilkinson (AUS), winner of back-to-back opening events in 2016 on the Gold Coast and at Bells Beach, retains the WSL Jeep Leader jersey with a commanding 24,000 points to Zietz’s 15,750 points as the world’s best surfers leave the Australian leg.