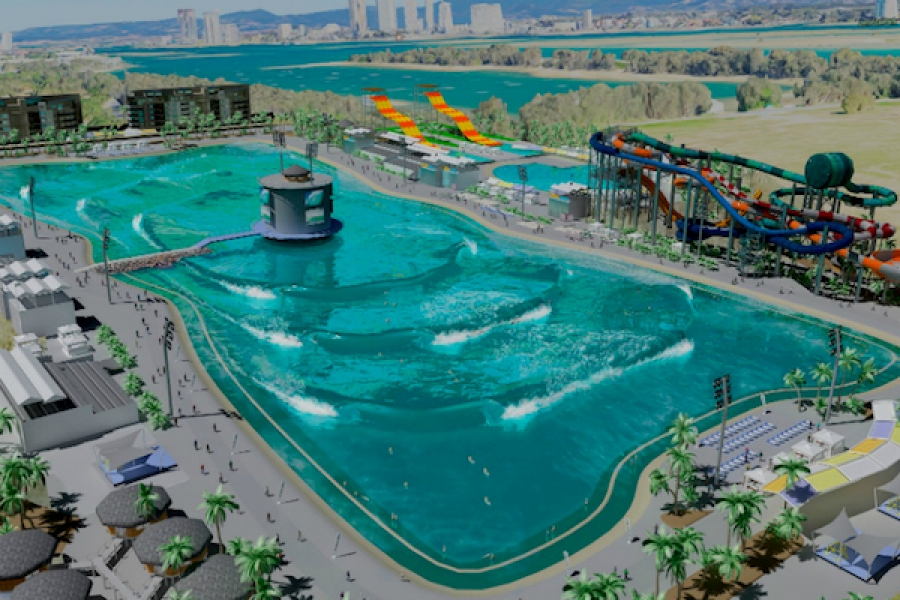 ...."And Australia might be the new frontrunner if an ambitious new project is all it’s cracked up to be.
It’s been 18 months since 11-time world champion Kelly Slater rocked surfing with a “game-changing” video of himself riding a perfect 2.1 metre man-made tube at a secret location.
Details are still relatively scarce but we now know Kelly Slater Wave Company’s ‘Surf Ranch” is located in San Joaquin Valley, California, is now majority-owned by the World Surf League and is still under development.
Several companies have since joined the elite “wave pool” race — including the Perth-based Wave Park group — and an another Australian company has now announced the backing of former world champion Mark Occhilupo.
Brisbane-based start-up Surf Lakes has unveiled its plans for multi-break surf parks that will be capable of producing more waves per hour (up to 2,400) than Wave Park’s ‘Cove’ design and Slater’s wave pool combined.


Developers say versatility will be the key, with a capability for up to eight breaks of varying size and length running simultaneously, from those suitable for beginners to “extreme” barrels.
Construction of a near full-size testing and demonstration pool is already underway somewhere in north Queensland, with the exact location being kept secret, with plans to have the facility up and running at the end of the year.
Surf Lakes then hopes to license the technology around the world to theme parks, resorts and property developers.
The highlight of Surf Lakes’ planned demonstration pool is “Occy’s Peak”, a 2.4m break running for about 60 metres that Occhilupo helped design and describes as “a little similar” to Tahiti’s famous Teahupoo break.

The Australian surfing great believes the project will fulfil a lifelong dream of his and top the Slater-backed design.
“The other wave pools we’ve seen out there, they’re pretty good, but this one is next level,” 1999 world champion Occhilupo told foxsports.com.au.
“That (footage of Slater’s wave) was incredible and, I’m not being biased, but I really think this is going to outdo it.
“Kelly’s is perfect, don’t get me wrong, and it’s long. But this is just a lot bigger and we’ve got variety.”

With surfing set for its Olympic debut at Tokyo 2020, Occhilupo said the project could ultimately provide elite training and competition venues.
“We’re not trying to beat the ocean but the option is there for when the waves aren’t there in the ocean,” he said.
He said it would also help boost participation in the sport, especially in remote areas.
“This is something I’ve dreamt about my whole life but it hasn’t really happened until now because of the technology,” he said.
“The possibilities are endless.”...."
Anterior Fatal attack reignites shark cull debate in Australia Próxima Johanne Defay Takes Top Honours at Port Stephens Toyota NSW Pro