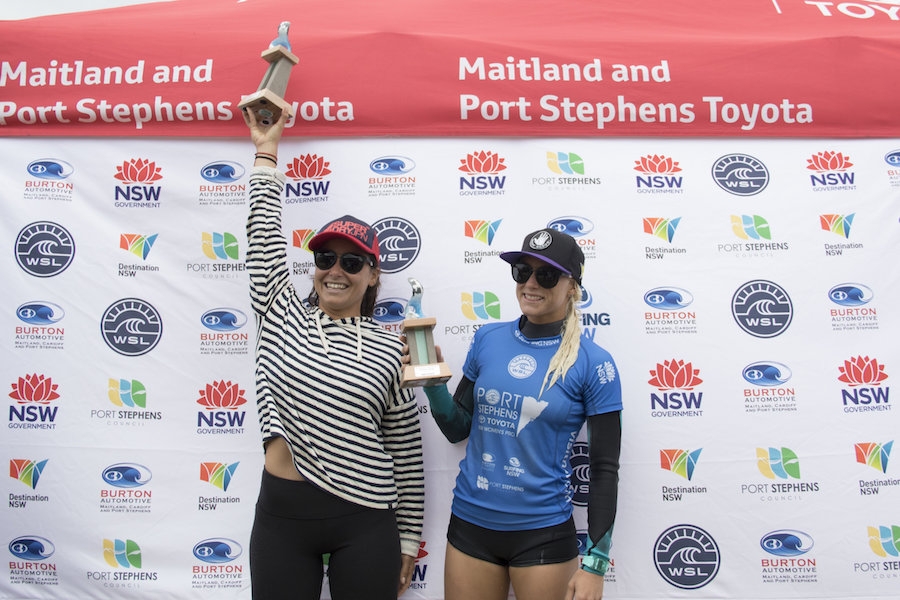 After an incredible four days of competition, Defay found herself up against Hawaiian competitor Tatiana Weston-Webb (HAW) in the final as Birubi Beach served up clean 2-to-3 foot waves.

The all-Championship Tour competitor final was a thriller with the lead swapping back and forth between the two -- Weston-Webb holding the advantage for the majority of time with a heat total of 14.43 (out of a possible 20).  Only needing a mid-range score with under five minutes left, Defay took off on a long right and laid a huge layback snap and finished off with a closeout re-entry. The judges loved it and scored her an excellent 9.07 to boost her winning heat total to 17.74 leaving Defay to take the win and the top spot for the 2017 Women’s Qualifying Series.

“This feels great to get another win this year,” Defay said. “My last few events on the CT haven’t been great so I came here to surf some heats, get some scores, and build my confidence. I didn’t have much pressure on me because I’m pretty safe on the CT so that definitely helped me relax during my heats and just have fun. I’m so happy to come here and surf such great waves, it is a beautiful place.”

At the completion of the 2017 Qualifying Series, Defay has had three QS6,000 final appearances, taking wins in two of them, here at Port Stephens and the first event of the year down the road at Surfest in Newcastle. It’s safe to say her appreciation for the QS and this area is abundant.

“It is so important for the women to be able to finish off the year with a big QS like this. Even for the CT surfers, it means a lot for us to be able to come to these events as the standard is so high. Without it, the opportunities would not exist for the women QS surfers. I had never won a WQS and now I have won two in the same area which is really special.”


Weston-Webb was a standout all event and looked destined to take the win when she opened up the final so strong. Although Defay overtook her in the end, the powerful goofy-foot was over the moon to have come and surfed the beautiful beaches of Port Stephens.

“It’s been an awesome week here,” Weston-Webb said. “At the beginning of the year I didn’t think I would be here chasing points on the QS, but here I am. It’s a good feeling though to make the final and know how well I surfed and know I have re-qualified, I can head to Maui for the final CT with confidence.”

Having had a below par year on the CT for her standards, Weston-Webb was relying on QS events to guarantee her spot on the 2018 CT. She along with all of the competitors was all too aware of the hard work that went into this event and was thankful for everyone’s efforts.

“Everyone was so excited at the start of the year when we saw the final QS6,000 on the schedule so when we heard it wasn’t going to happen we were really disappointed. It is amazing that everyone got together and worked so hard and put in money to ensure the event would remain, we are all so appreciative.” 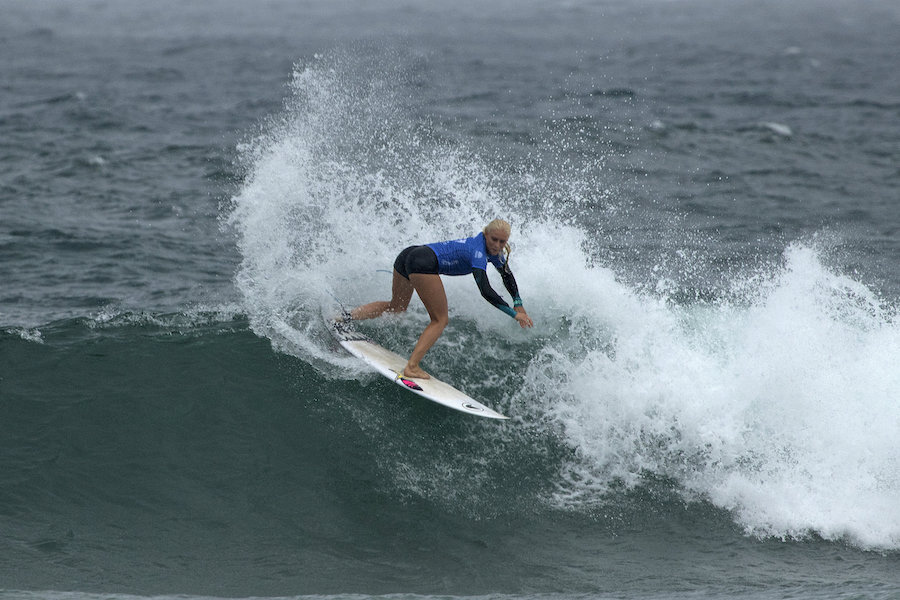 After six years at the top tier of competitive surfing, Kiwi Paige Hareb (NZL) had fallen off the tour and spent the last three years fighting to get back on. After a great competitive season on the QS Hareb needed a strong result at Birubi to return to the CT. After being eliminated in 5th, her fate was in the hands of Weston-Webb who after beating Macy Callaghan in the Semifinal, gifted Hareb her return to the ‘dream tour’.

“I was so shattered after my loss I came home to watch the event online,” Hareb said. “That heat was so hard to watch and I just felt sick for the last few minutes, it just took forever. Once it was over and I knew I had qualified I just burst into tears. It has been an intense week and a long year so I’m glad it’s over and I’m back. I have matured a lot over the last few years so am stoked to get back on and tackle it with a different approach and hopefully stay there.” 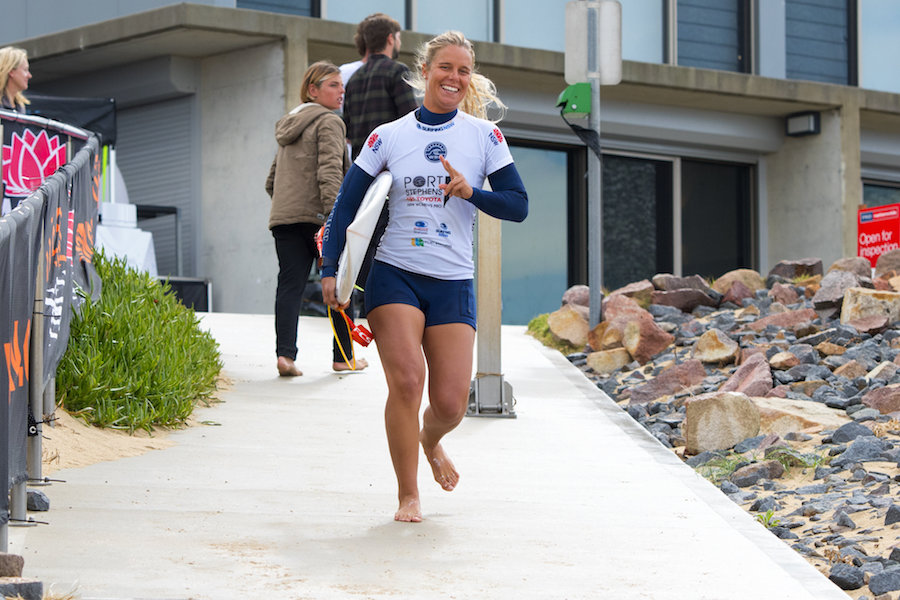 Before the women hit the water for the final, The Port Stephen’s Toyota NSW Pro pres. By Newcastle Airport Men’s QS1,000 final took place. It was a battle of the form surfers as Margaret River’s Jacob Willcox (AUS) came up against Burleigh Heads youngster Liam O’Brien (AUS).

It was a heated battle as the two going blow-for-blow, both posting solid scores. O’Brien surfed fast and loose, mixing power with progression to post a near excellent heat total of 15.60. Willcox fought back, going left and right and surfing with aggression, but was unable to find the score he needed to win. O’Brien held the lead and went on to take the biggest win of his career.

“I’m so happy - I can barely speak right now,” O’Brien said. “I didn’t really expect much from myself at this event. I just came to have fun and surf heats so to find myself in the final was amazing. Everyone in the competition was surfing so well but I just seemed to get a lot of the good waves. I’m really stoked with this win, it’s definitely the highlight of my career so far.” 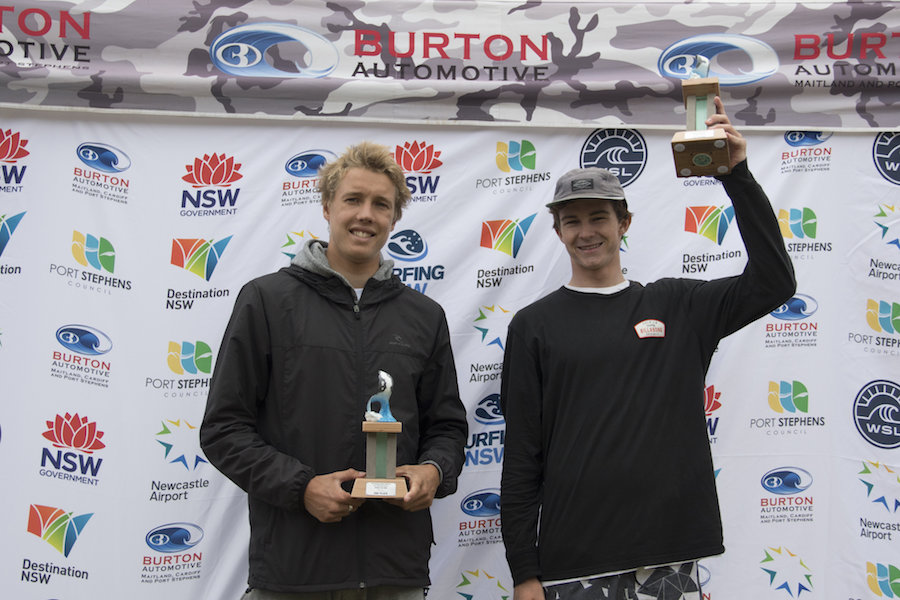 Fresh off a win at the Phillip Island Pro QS1,000 earlier this week, Willcox came into this event as the man to beat. With the hope of going back-to-back finish just short was disappointing for the young West Aussie, however, his performance in the last two events has increased his rank enough to put him into the QS10,000 events in Hawaii later this month. He will head to Hawaii leading the WSL Australia / Oceania QS rankings, 23 spots higher than he was this time last week.

“I’m really disappointed to fall short today,” Willcox said. “I’m sure once I have a while to think about it I’ll feel better about these two events. Liam (O’Brien) is a really deserving winner, he surfed great all week so I’m happy for him. I wasn’t thinking about my ranking much coming into these events so to find out I can enter Hawaii is great. This has given me some confidence so I guess I will go home and prepare for Hawaii and hopefully get some amazing waves over there.”