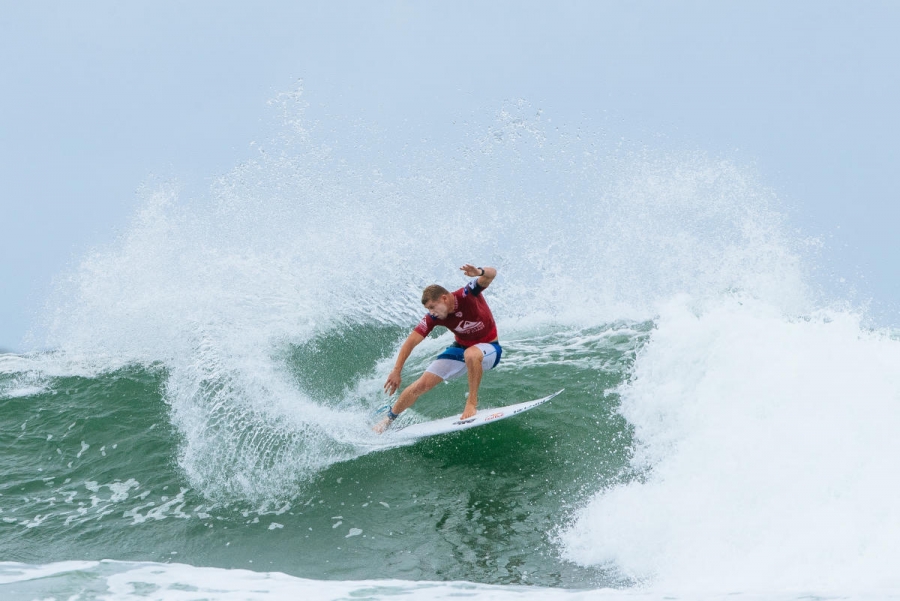 The opening day of the Quiksilver and Roxy Pro Gold Coast, Stop No. 1 of the World Surf League (WSL) Championship Tour (CT), kicked off the new season with unpredictable drama,....

...as big upsets shook the opening rounds of competition.

The world's best surfers charged the three-to-five foot (1 - 1.5 metre) conditions and challenging current at Snapper Rocks to complete Round 1 and set the stage for the upcoming, nail-biting Round 2 elimination heats.

Gabriel Medina (BRA), 2014 WSL Champion, earned the last position in his heat against compatriot Italo Ferreira (BRA) and event wildcard Leonardo Fioravanti (ITA) after a dramatic interference call in Round 1 Heat 5. Medina’s wave, which would have been an excellent-range score and potentially the heat winner, was disqualified due to the interference penalty on Fioravanti. Brazilian threat Ferreira was able to lock in a solid 7.33 (out of a possible 10) and 6.93 to take advantage of Medina’s setback and advance through to Round 3. Fioravanti and Medina will need to surf again in elimination Round 2 to avoid the dreaded last place result.

“That was a pretty crazy heat, but I just tried to do my job out there,” Ferreira said. “I’m really excited to start off with a heat win. I’ve been training really hard over the offseason and am feeling really confident. Last year was tough for me, so I really want to improve my seed and have a big season.”

2018 CT Rookie Griffin Colapinto (USA) upset the competition today by taking down current World No. 1 John John Florence (HAW) in Round 1 Heat 6. Today marked Florence’s first Round 1 loss since the 2016 MEO Rip Curl Pro Portugal, ending his run of 12-straight Round 1 CT wins. Colapinto escaped out of a challenging tube to earn the winning ride, a 7.67. Florence will be relegated to elimination Round 2 along with event wildcard Mikey Wright (AUS), who was not able to find the waves to challenge the rookie.

“I knew that Mikey [Wright] was going to paddle deep to get the inside, then John John [Florence] did too, luckily for me they both fell on their first waves and when mine came through it was a good one,” Colapinto said. “It feels really good to get the Round 1 win over those guys in my first event, but I’m trying not to hype it up. At the end of the day, it’s only Round 1 and I have goals of getting some big results this year so I don’t want to get ahead of myself.”

Owen Wright (AUS) is off to a strong start to defend his Quiksilver Pro event title after his win in the opening heat of Round 1 against Caio Ibelli (BRA) and Ezekiel Lau (HAW). Wright scoured the lineup to find the only two mid-range scores in the heat to advance straight through to Round 3.

“Because this is the first heat of the year and the first heat of the day, you build it up in your head,” said Wright. “But sometimes you end up just grinding the heat out, as the waves were not there. I am feeling great. Last year, my health was on the rise and I am taking the confidence from last year into this season. A win is a win, and I am happy to move through.”

2017 World No. 3 Julian Wilson (AUS) has had an up-and-down start to 2018 after injuring his shoulder in a motorbike accident in late January, then just over a week ago welcoming his first child into the world with his wife Ashley. The Sunshine Coaster started his 2018 competitive campaign with a Round 1 win over Joan Duru (FRA) and Ian Gouveia (BRA).

“I had my first surf since the injury only three days ago,” Wilson said. “It still hurts and I’ve got to dig deep to push through the pain, but I’ve got a great crew around me and I know it’s only going to get better. Being out of the water has reconnected me with my love of surfing and I’m in a good place. I drove down from the Sunshine Coast at 3:30 a.m. this morning, I’ve just had a baby girl, Olivia, and I wanted to spend as much time as possible with her and my wife Ashley. Luckily I won and now I can drive back up to see my girls. After an injury and focusing on having a baby, I’ve never come into to this event with no pressure and nothing to lose, which is a nice feeling, so I’m looking forward to seeing how the rest of the week goes.”

Jordy Smith (ZAF), current World No. 4, put together a solid result to win his Round 1 heat against Americans Conner Coffin and Patrick Gudauskas. Smith, 2017 World Title contender, has made his intentions known that he is after a big result here at Snapper Rocks to kick off his 2018 Title campaign.

“I’m excited for a fresh start to the year,” Smith said. “This is such a great location to kick off the year, and although the waves are a little tough today, I’m excited to for the season ahead and want to keep motivating myself to surf and enjoy doing what I do. My major focus this year is a World Title. I’m going to keep knocking on that door but will just take it one event at a time.”

Mick Fanning (AUS), who announced his retirement from CT competition earlier this month, took a win in the last heat of the men’s opening round. Fanning faced off in a two-man heat against Brazilian rookie Jesse Mendes, after 11-time World Champion Kelly Slater (USA) did not paddle out due to injury. Fanning battled a wave-starved heat and a ripping current but was able to progress with a couple of mid-range scores. Slater’s absence places him into elimination Round 2, where he will come up against Keanu Asing (HAW).

“The crowd was incredible,” Fanning said “In years gone past, I might have tried to block it out, but sitting and surfing out there I really tried to soak it in. I just want to thank everyone for coming down. It would be awesome to win here, but I’m not aiming to win the event for myself. I want to go out and put on a show and perform as a way to thank my family, friends and fans for all the support for all these years.”

2012 WSL Champion Joel Parkinson (AUS) fell to fellow CT veteran Jeremy Flores (FRA) in Heat 9. Parkinson was on the cusp of advancing through but missed the win by just two points on his last attempt.

Matt Wilkinson (AUS), 2017 event runner-up and 2016 event winner, was relegated to elimination Round 2 today after losing to CT veteran Michel Bourez (PYF) and rookie Michael Rodrigues (BRA) in Heat 2. Bourez found two strong scores, a 6.17 and 7.00, to skip the next elimination round.

Unlike Colapinto, rookies Yago Dora (BRA), Willian Cardoso (BRA), Tomas Hermes (BRA), Wade Carmichael (AUS), Rodrigues, and Mendes were not able to win their Round 1 heats and will surf again in Round 2.

Following the men’s competition, the women completed Round 1 of the Roxy Pro where action continued with dramatic exchanges and heated competition to jumpstart the year.

Three-time WSL Champion Carissa Moore (HAW) set the bar in her first heat of the year with the highest combined of the day, an excellent 16.16 (out of a possible 20). Toward the end of the heat, Moore and compatriot Tatiana Weston-Webb (HAW) had a close-encounter where Weston-Webb surfed the same wave just as Moore came out of a deep barrel by utilizing her priority. Unfortunately, Weston-Webb’s efforts only resulted in a 2-point ride whereas Moore captured an authoritative 8.83 and the win.

“I was keeping my expectations low as all day it has looked tough out there so I was really surprised to post an excellent heat total,” Moore said. “That barrel that I got was so open and hollow. I could see her [Tatiana Weston-Webb] paddling for it and knew I had to get out and then get out of the way. When I did come out, I didn’t know if they would score it so when they did I was stoked.”

In an unexpected turn of events, Macy Callaghan (AUS) -- injury replacement for Courtney Conlogue (USA) -- defeated six-time WSL Champion Stephanie Gilmore (AUS) in Round 1 Heat 4. Callaghan’s performance not only earned her the ability to skip Round 2 but also enabled her to showcase what is to come in the next generation of surfers. 2017 Rookie of the Year Bronte Macaulay (AUS) did not find the scores against Callaghan either and will also surf again when competition gets back underway.

“Steph (Gilmore) is my biggest inspiration, so it was cool to come up against her, but I was definitely really nervous,” Callaghan said. “I really want to qualify for the Championship Tour full-time next year, so I have been training a lot and dialing in my boards, so I feel super prepared. It was a slow heat for waves, so I was really lucky to get that early one and post a solid score.” 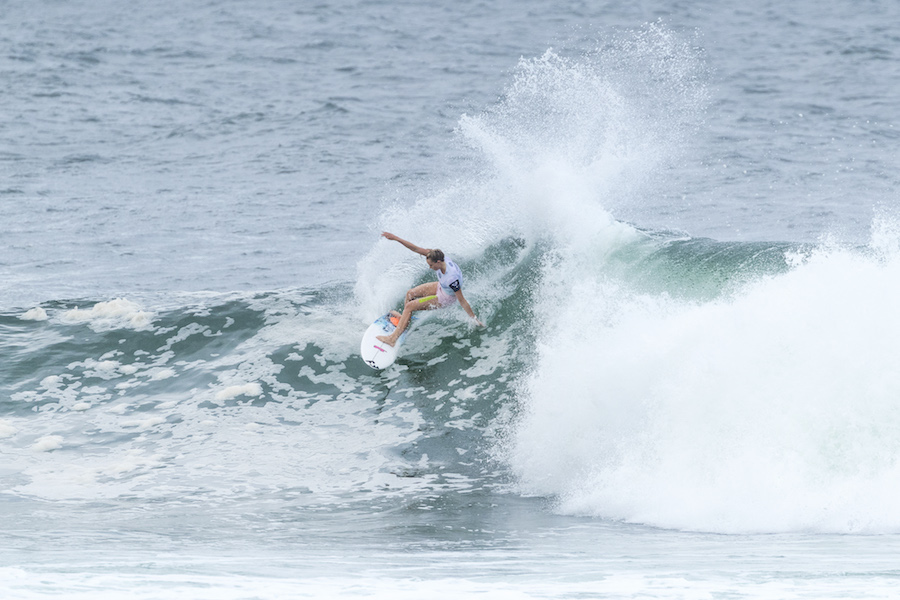 Tyler Wright (AUS), defending WSL Champion, powered through her Round 1 heat to earn an early win over Malia Manuel (HAW) and event wildcard Bianca Buitendag (ZAF). The current World No. 1 first captured the lead with a 4.50 and locked in the win with a 5.67 backup ride.

“I don’t know if I missed all the good waves, but from where I was sitting it was really tricky out there,” Wright said. “My goals are basically the same: Win every heat, Final and World Title. It was my first real preseason working with my coach Glenn Hall and we worked on fitness, which helped out there because there was a lot of paddling. It’s good to start the year. Hopefully, I can find a few better scores in the next round.”

Sally Fitzgibbons (AUS), current World No. 3, blitzed through Heat 5 after gaining early control over Silvana Lima (BRA) and Paige Hareb (NZL). Fitzgibbons’ sharp surfing earned her two 6-point rides for her first heat win of the season. The Australian, who has yet to earn a win at Snapper Rocks, is ready to do battle in her next matchup.

Fresh of a recent Qualifying Series 6,000 event win in Newcastle, Hawaii’s Coco Ho (HAW) carried her form into her opening round heat on the Gold Coast, where she came up against Nikki Van Dijk (AUS) and Sage Erickson (USA). Ho was lucky to find a long, open Snapper wall to post a 6.00 point ride in a heat where quality waves were scarce. She ended the matchup with a total of 9.93 and progresses into Round 3.

Johanne Defay (FRA) will also advance to Round 3 after defeating 2017 event runner-up Lakey Peterson (USA) and 2018 CT Rookie Caroline Marks (USA). Defay narrowly edged out the Californian by 1.03 points to capture the first women’s heat win of the 2018 CT season. Peterson and Marks will be sent to elimination Round 2, where they will fight to stay in the draw.

Event officials will reconvene tomorrow morning at 6:30 a.m. AEST to make the next call for a potential 7:00 a.m. start.