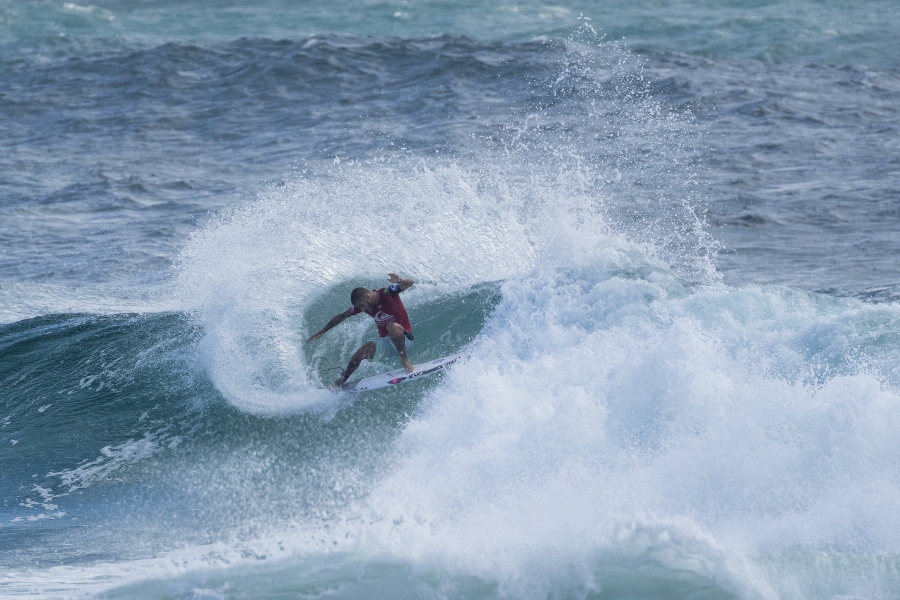 Caption: Filipe Toledo (BRA) earned the highest single-wave score of the event today, a near-perfect 9.67, to advance to the Quarterfinals. Caption: © WSL / Cestari

The drama and tension continue to build at the first stop on the 2018 World Surf League (WSL) Championship Tour (CT), the Quiksilver Pro Gold Coast.

Today was an unnerving day in men’s elimination Rounds 3 and 4 as upsets continued in the four-to-five foot (1.2 - 1.5 metre) conditions at Snapper Rocks.

Event wildcard Mikey Wright (AUS) continued to turn the Quiksilver Pro Gold Coast upside down with another massive win today over Gabriel Medina (BRA), 2014 WSL Champion and 2014 event winner. Just yesterday, Wright upset the competition with his win over current World No. 1 John John Florence (HAW) and today he continued his tear by taking down the current World No. 2. The Australian has made his competitive intentions clear this week and will be talked about as the competition’s celebrated darkhorse.

“I’m not too stressed out about these big names," said Wright. "I just surf every heat the same and keep to my game plan. I like to hang down on the beach with my dog and treat this event like a Qualifying Series contest. I’m not too into all of the attention and drama in the competitors' area -- I like to just do my own thing. It’s a great experience coming up against these big names, but I don’t let it get to me."

Despite Wright’s success in the early rounds, he was not able to escape the new Round 4 format, which now advances the top two finishers to the Quarterfinals and eliminates the third-place finisher in Equal 9th. Wright fell to challengers Filipe Toledo (BRA) and Adrian Buchan (AUS), who earned first and second in the heat, respectively.

Having finaled at Snapper Rocks twice, Toledo is always one to watch at the Quiksilver Pro. His electric blend of power and progression was on show as he wowed the crowds with the highest single-wave score of the event so far, a near-perfect 9.67 to progress into the Quarterfinals.

“The wind conditions did not make for the best air conditions, so I choose to stick to the face of the wave,” said Toledo. “I had the power and speed going into the 9.67 wave and was actually waiting for it to barrel, but it never did, so I figured I had to get creative with my maneuvers. I had a lot of fun this heat and took initiative on a lot of the waves, which really paid off.”

2017 Quiksilver Pro Gold Coast winner Owen Wright (AUS) has booked himself a spot in the Quarterfinals at Snapper Rocks after an impressive display of surfing. First, he eliminated 2018 CT Rookie Willian Cardoso (BRA) in the opening heat of Round 3, then went on to post a 17.00 point heat total (out of a possible 20) in Round 4. It was a bittersweet victory for Wright as his good friend Mick Fanning (AUS) was eliminated in his last appearance at his hometown CT event.

“I did my first trip with Mick [Fanning] when I was 14,” Wright said. “He has been like a guardian angel to me through my head injury. He’s showed me a lot of guidance over the years and is definitely one of my heroes so to have the chance to surf heats with him is really nice. I’ve always wanted to finish at the top of the rankings. I’ve managed to stay up there -- even if I’ve had a few injuries and setbacks over the years -- but I'm feeling so good and healthy now and am building and building.”

Fellow CT veteran and 2012 WSL Champion, Joel Parkinson (AUS), was also eliminated from the draw. The Coolangatta local was dispatched by 2018 CT Rookie, Griffin Colapinto (USA), in Round 3 Heat 9. The 19-year-old rookie continued on to Round 4 where he edged out Kanoa Igarashi (JPN) by just 2.19 points. He progressed in second place behind Julian Wilson (AUS), who looks in great form despite a recent shoulder injury. Wilson will match-up with Michael Rodrigues (BRA) in the Quarterfinals, while Colapinto will face Michel Bourez (PYF).

The final two Quarterfinalists were decided in a down-to-the-wire matchup between 2015 WSL Champion Adriano de Souza (BRA), Michel Bourez (PYF), and 2018 CT Rookie Rodrigues. While Bourez dominated the heat, the Brazilian duo of Rodrigues and De Souza battled it out for the second qualifying spot, which was eventually taken by the rookie Rodrigues. It was the perfect way to end an incredible day for Rodrigues, who earlier dispatched World Title contender Jordy Smith (ZAF).

“I have been sitting in Brazil thinking about this event a lot and trying to mentally prepare,” Rodrigues said. “I can’t really explain how stoked I am to be in the Quarterfinals in my first CT event. I have always dreamed of this and now it is happening. I’m doing this for my mother. She has always believed in me and been by my side so this is for her.”

The intense matchup between Brazilian superstars Toledo and Italo Ferreira (BRA) was a standout elimination heat today after both surfers attacked the Snapper Rocks lineup and exchanged multiple innovative maneuvers. The win eventually went to Toledo, who secured a marginal 0.9-point advantage over his compatriot.

Injury replacement Michael February (ZAF) moved into the Quiksilver Pro draw when 11-time WSL Champion Kelly Slater (USA) pulled out of the event due to an ongoing foot injury. February was eliminated by Wilson in Heat 7 of Round 3. The young South African looked right at home on the WSL Championship Tour earlier in the event when he eliminated former event champion Matt Wilkinson (AUS) in Round 2 but now goes home from his first-ever CT event with an Equal 13th place finish.