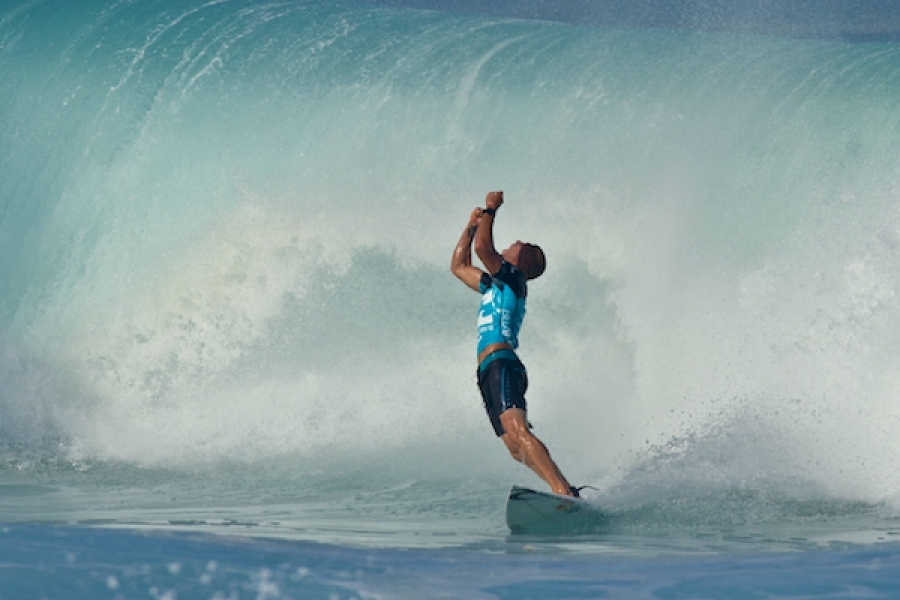 The World Title Has Been Decided at the Billabong Pipe Masters!

The final event of the 2013 ASP World Championship Tour (WCT) season, the Billabong Pipe Masters is culminating today in solid 10 to 15 foot (three-to-five metre) waves at the infamous Banzai Pipeline and Fanning’s last-minute heroics in both Round 5 against C.J. Hobgood (USA), 34, and the Quarterfinals against Yadin Nicol (AUS), 28, has sealed his campaign for this year’s world surfing crown over an rampaging Kelly Slater (USA), 41.

“It wasn’t easy,” Fanning said of his morning Round 5 bout with Hobgood. “If you want to win a world title, you have to put it all on the line. I basically got flogged for 28 minutes of that heat before that gem came through. I heard from all the boys whistling on the beach and I knew it was going to be a good one when it came in. I got a roll in off of second reef and it set up for a really good section on first reef. Came through at the right time and that was definitely a magic moment for me.”

Drawing compatriot Nicol in the Quarterfinals, Fanning once again found himself at a disadvantage early in the heat with his West Australian opponent racking up a number of high scores on his backhand at Pipeline. Needing an excellent score in the dying moments of the heat, Fanning dropped into on a second reef set, setting up for a tremendously deep backhand barrel before being spat out into the channel. With throngs of fans and media swarming him on the beach, Fanning awaited judgment of his final wave – a 9.70 out of a possible 10 for the heat win and the 2013 ASP World Title.

“The world title is something that takes a whole year, but sometimes it can feel like it boils down to the final day and the final heats,” Fanning said. “I’m sure I gave my wife Karissa and my mum enough stress today to last a lifetime. I was never worried myself now that I think of it. I knew what I needed to do and if the opportunity came, I knew I could do it. That opportunity came in both heats today. It’s an incredible feeling. I’ve been having fun all year and to clinch on a day like this at Pipeline makes it that much more special.”

Slater followed up Fanning’s clinching of the 2013 ASP World Title with a clinic in his Quarterfinal against Sebastian Zietz (HAW), 25, and was congratulatory of his Australian title opponent post-heat.

“I’m excited for Mick (Fanning) – it was an exciting finish,” Slater said. “Mick has been focused all year. It’s hard for me to pinpoint exactly where my year didn’t stack up. I got hurt in Tahiti and probably should have rehabbed more before Trestles. I didn’t surf very well through Europe. A world title is a yearlong thing. It was a great year for surfing and I’m excited we get to wrap up in great waves at Pipeline.”