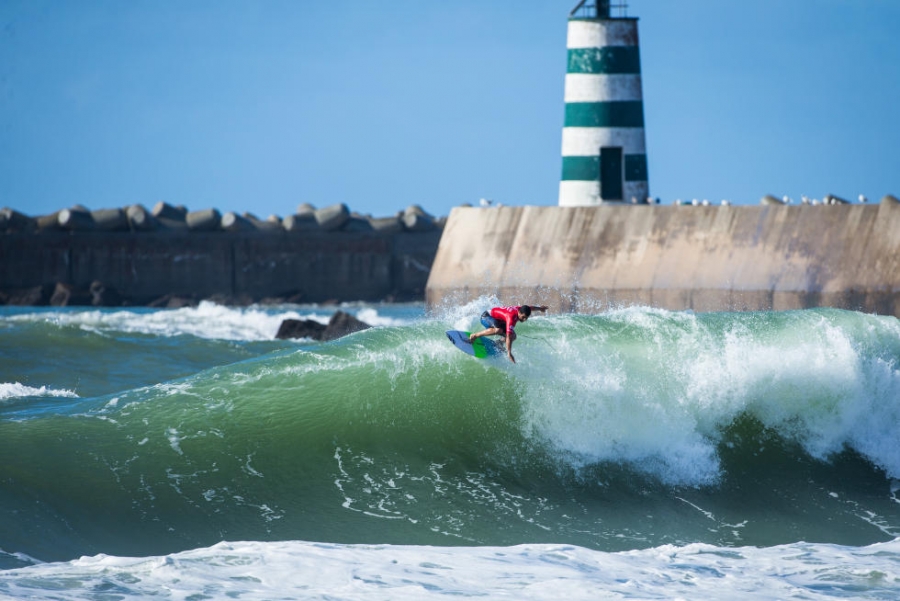 Moche Rip Curl Pro Portugal relocates to nearby Molhe Leste as competition goes into round 5.

The Moche Rip Curl Pro Portugal, Stop No. 10 on the 2015 Samsung Galaxy World Surf League (WSL) Men’s Championship Tour (CT), resumed this morning in wind-affected three-to-five foot surf at the back-up location of Molhe Leste in Peniche. Competition completed the remaining two heats of Round 4 and the first two heats of Round 5 before the incoming tide forced organizers to call competition off for the day.

Jeremy Flores (FRA), 27, advanced into the quarterfinals with a win in Round 4 over local wildcard Vasco Ribeiro (PRT) and Keanu Asing (HAW). The Frenchman displayed his usual solid surfing with forehand carves and timely snaps on the chunky sections at Molhe Leste.

“It’s definitely fun out there, it’s a lot more powerful than it looks and very hard to hold on especially on the last turns because it moves so much,” Flores said. “I’ve had a freesurf before the event started and changed boards just before I got out for my heat for a bigger board. Conditions are improving with the incoming tide so we’ll see how it goes if we run the quarters.”

Italo Ferreira (BRA), 20, dominated his Round 4 bout to reach the quarters for the fifth time in his rookie season amongst the Top34. Ferreira posted the day’s highest single wave score, an impressive 9 point ride for a lengthy floater on a big throaty wedge completed by a backside re-entry.

“I’m super stoked to make this heat and with good scores, I changed my board today because the waves are bigger and I needed more drive,” Ferreira said. “I’m feeling so good right now, and I’ll focus on the next heat, it’s great to be in the quarters.”

2012 WSL Champion Joel Parkinson (AUS), 34, eliminated Kolohe Andino (USA) in the opening Round 5 matchup and capitalized on an early start with a long wave surfed in the opening minutes of their exchange. Parkinson’s smooth rail surfing was rewarded by a 7.67, and allowed the Australian to move onto the quarters.

“It’s a really good location, it’s a really fun wave. It has that slingshot effect and I was buzzing to get out there,” Parkinson said. “At Trestles I surfed against Felipe in the quarters and I had a meltdown so hopefully this time I can make it worth my while, especially if we’re waiting until Saturday.”

Recently crowned the Portuguese Waves Series - Cascais Trophy Champion, Kolohe Andino (USA), 21,  couldn’t find enough opportunities in a very slow lineup and was forced out in Round 5 with an equal 9th place in Peniche. This result marks the young Californian’s best this season on the Championship Tour, at the term of an excellent European campaign.

“Our heat started with a decent set, my wave only offered one good section, I got a 5 and Joel’s was better and he got a 7.6,” Andino broke down. “Then we mostly sat there for the rest of the heat. It’s tough, because tides are so dramatic. It was firing and all of a sudden it stopped. Europe’s been great to me, I got two 9th, a 5th and a win in four events so I’m super stoked with that. I feel like I’m learning to compete and hopefully frustrating heats like that won’t change the way I’ve been surfing.”

Brett Simpson (USA), 30, managed to survive an extremely tricky matchup with Nat Young (USA) and moved on to the quarterfinals where he’ll face dangerous wildcard Frederico Morais (PRT) when the event recommences.

Up first when the event resumes will be Vasco Ribeiro (PRT) against Michel Bourez (PYF) at the Moche Rip Curl Pro Portugal.

Surfline, official forecasters for the World Surf League, are calling for:

Solid swell fills in for Tuesday and Wednesday but onshore winds are expected. WNW swell eases some on Thursday and holds into Friday. Another round of solid windswell/swell due for Saturday. Local winds and conditions will remain problematic for Supertubos during the second half of the week and into the weekend.