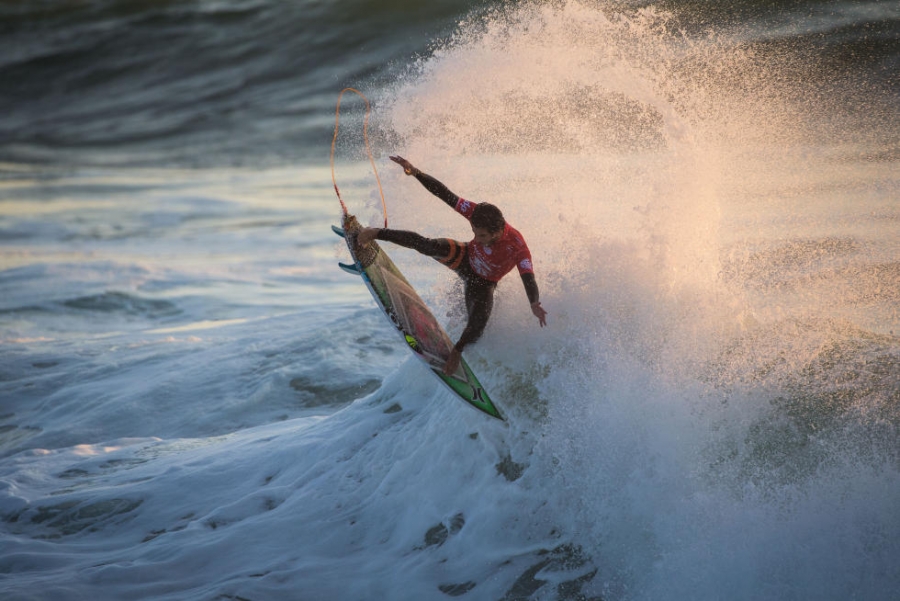 Toledo started his final with a bang, claiming the event’s second perfect 10 point ride for a combination of two aerial maneuvers and transitional floaters to launch his assault towards a third event title this season. In a combination situation halfway through the Final, Ferreira took his air game to the next level and launched into a huge aerial for a near-perfect 9.93 that put him right back into the battle for first place.

Toledo kept building momentum and confidence and improved on his back-up score with another two-airs combination to increase his lead over Ferreira, ultimately clinching the Moche Rip Curl Pro Portugal title. With a third victory this season, Toledo climbs up to second on the Jeep Leaderboard, only 200 points behind current WSL No.1 Mick Fanning (AUS).

“I have no words, I’m just so stoked,” Toledo said. “I had a crazy two-weeks here, I hurt my back right when I got here after France. France was such a bummer for me, but it made me think about everything and put my mind in the right place and now the results are showing. The Final to me is the best heat, I don’t have anything to lose and I just go for it.”

One of the most in-form surfers throughout this whole event, Ferreira fell just short of a first ever CT victory in the final against Toledo, but proved to be extremely consistent in the various conditions on offer in Peniche. Current leader in the Rookie of the Year race, Ferreira nets a career-high result and vaults up to 6th on the Jeep Leaderboard in his inaugural season amongst the World’s Best surfers.

“I just want to thank God for the amazing moments, and thank everyone who showed up here,” Ferreira said. “I can’t believe I just made my first final, I’m so happy. I’m super excited to go to Hawaii and am going to do my best there.”

Brett Simpson (USA), 30, equalled his career-best result with a 3rd place in Peniche, defeated by event winner Toledo in their Semifinal bout. Simpson had a solid campaign in Portugal, defeating giant killer Frederico Morais (PRT) for his spot in the semis among other big performances. This result will propel Simpson to 26th on the CT rankings, giving the Californian a shot at requalification in Hawaii.

“I think just getting through some heats was a big confidence boost, maybe especially that first one with Parko (Joel Parkinson) where I was behind,” Simpson said. “It’s pretty fatiguing surfing these conditions day in and day out. I physically felt great and my surfing has been there for a while, I just wasn’t making a lot of those close heats. I’m super happy with this result. I will probably need a huge result in Hawaii to re-qualify, but at least with this event I’ve given myself a chance and I’m excited about that.”

In a re-match of last year’s World Junior Championship final, local wildcard Vasco Ribeiro (PRT), 20, took on Ferreira in the semifinals, but this time Ferreira was on a roll and Ribeiro couldn’t find the waves he needed to overtake the Brazilian. Ribeiro’s path to the semis was exemplary, having defeated Jeremy Flores (FRA), Michel Bourez (PYF) and Adriano De Souza (BRA) on his way to an equal third for his first time competing at the highest level.

“It’s amazing, you can’t be sad with a semis result in your first CT ever,” Ribeiro said. “I want to thank everyone who came here to support us and thanks Moche for the opportunity. This for me was just a taste of what the CT is, this is where I want to be. There are a couple more events to go this season and I hope I can keep the ball rolling.”

Reigning WSL Champion Gabriel Medina (BRA), 21, had a mathematical shot at leaving Portugal with the Yellow Jersey had he won the event, but his Peniche campaign was halted in the quarterfinals by a lethal Ferreira. With an equal 5th today, Medina jumps up to No. 4 on the Jeep leaderboard and will be a strong contender when the World Title race resumes at Pipeline next month.

“Conditions were tricky and I couldn’t find the right waves,” Medina explained. “I can’t wait to go to Hawaii, I’ll be surfing in the Triple Crown too. Like I said I wasn’t thinking about the World Title, but to be back in the race feels great. I’m heading home now and will train and do a QS at my home break to get ready.”

Frederico Morais (PRT), 23, saw his Portugal dream run stopped for a mere 0.08 in his quarterfinal matchup against Simpson. Despite the frustration of losing in difficult conditions, Morais looked back at an amazing event in Peniche, and this learning experience might see the current QS No.55 carry momentum into the all-important Hawaiian leg of events coming up.

“It’s been an incredible event for me, a fifth place is just unbelievable, especially considering as a wildcard I had to go against the very best surfers in the rankings,” Morais stated. “I’m stoked with the way I surfed and the maturity I displayed competing against those guys. I will definitely get a huge confidence boost from this, but the QS are very different events, and contested in different conditions. I’m keen to hit the water again, next time will be in Brazil and I’ll see how I go there. I can’t wait to be on the CT full-time, it’s definitely my dream and I’m working hard towards it, hopefully it will come sooner than later.”