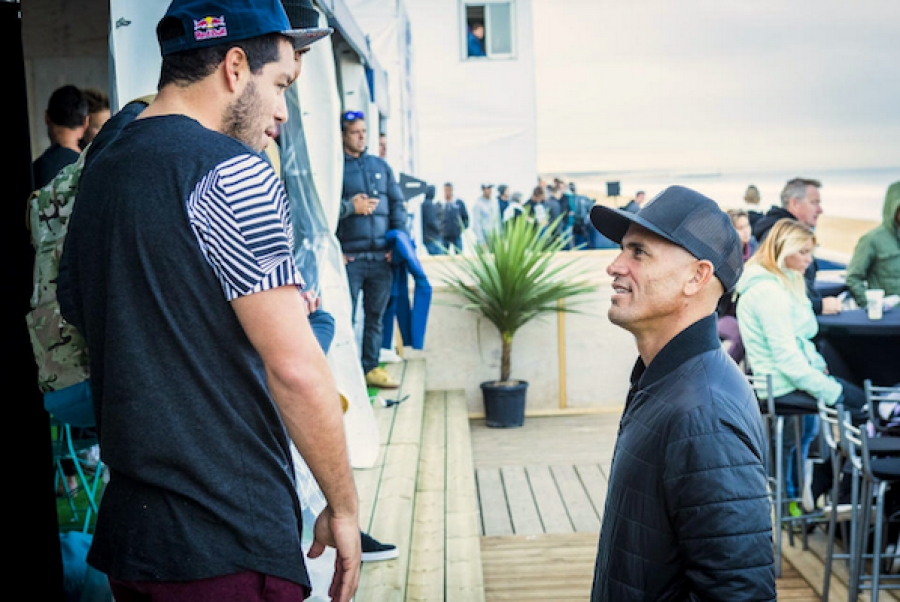 Round 2 of the Quiksilver Pro and Roxy Pro France, was completed today in good three-to-four foot (1 - 1.2 metre) conditions at the main venue of plage des Culs Nus in Hossegor.

The day witnessed a flurry of upsets as the challenging French beach breaks set the scene for a great shake up of the current rankings.
Matt Wilkinson (AUS), current World No. 3 on the Jeep Leaderboard, progressed through to Round 3 at the expense of local wildcard Joan Duru (FRA). The goofy footers battled on two exciting exchanges on back-to-back waves, with a slight edge for the Australian who displayed more control in the bumpy conditions.
“The waves were really fun and rippable and I knew Joan (Duru) living here is probably one of the most solid guys to come up against,” Wilkinson said. “We ended up getting two really good waves each and I’m stoked I came out on top. I’m pretty relieved, I gave him an absolute bomb at the start and to come back from that and win is satisfying.”
Ryan Callinan (AUS) put a dent in Jordy Smith (ZAF)’s WSL Title campaign by eliminating the current World No. 4 in Round 2 of the Quiksilver Pro France. The young Australian rookie took a page out of Wilkinson’s book, ripping backside and clinching the winning ride (a 6.93) halfway through their matchup with a smooth three-turn combo.

“It was pretty slow, I thought there would be a lot more waves, but when they come through they’re pretty fun it’s just hard to position yourself,” Callinan stated. “I’ve only made two heats this year, this was my third, and two were against Jordy (Smith) so it might just be a little good luck charm. I’ve had a lot of close heats this year so to have one go my way feels really good and hopefully it keeps going.”
Leonardo Fioravanti (ITA) continued to wreak havoc as a wildcard on the Championship Tour this season, taking down 11-time WSL Champion Kelly Slater (USA) for the second time this year. The Italian surfed his way to a solid 13.26 heat total while Slater had a hard time linking maneuvers on the fast breaking lefts of Culs Nus.

“I don’t have any pressure at CT events, I’m not trying to re-qualify or win a World Title here so I just want to have fun and when I went up against Kelly (Slater) again I just want to make the most out of it,” Fioravanti commented. “Whether I won or lost it was going to be an unbelievable experience. The more experience I get the better it is for next year if qualifying actually happens, so every heat is another 30 minutes in a World Tour rashie and I want to get as much as I can before I get my own rashie. Kelly is my idol and I’m always learning from him, spending some time with him in Margaret and Fiji has been a huge learning curve for me.”
Filipe Toledo (BRA) delivered one of the biggest performances of the day and eliminated fellow Brazilian Alex Ribeiro (BRA), courtesy of his slick forehand attack on the clean waves of Culs Nus. Toledo’s rebound in Round 2 put a brief stop to the carnage amongst top seeds bailing in 25th place in France.

“I’m so relieved, I was super nervous but after my 8.67 I felt like much more confidence as my board was working good and I felt great,” Toledo stated. “I have so much on my mind right now with the baby coming, I’m trying to get some sleep but it’s not easy with everything going on at home. It feels good to get that win and I’m excited for the next round.”
Alejo Muniz (BRA) and 2016 WSL Rookie Jack Freestone (AUS) delivered a couple more upsets by defeating Michel Bourez (PYF) and Josh Kerr (AUS) respectively, as the ever-changing conditions continued to end campaigns for some of the event favorites in Hossegor.
Rookie Conner Coffin (USA) surfed an extremely patient 30-minute matchup against Wiggolly Dantas (BRA), but capitalized on every opportunity he got to net an amazing 9 point ride with powerful backhand gauges on a great lefthander. The Californian backed it up with a similar approach on a shorter wave for a 7.33 and a Round 3 berth.
“Wiggolly’s always a tough draw, we’ve had a lot of close battles together, but any heat you make on this tour is good,” Coffin said. “Waves were fun in that heat, I’m just stoked to be here in France because this place is insane. I’m here with my family, Ryan and Philippe Malvaux who lives here and works with Hurley so lots of good energy. After a few bad results I’m kind of in the mindspace of just enjoying the whole tour experience, you never know when it’s going to end.”

Anterior QUIKSILVER PRO FRANCE, ROUND ONE COMPLETED Próxima FLORENCE AND MEDINA ADVANCE TO THE SEMI FINALS AT FRANCE